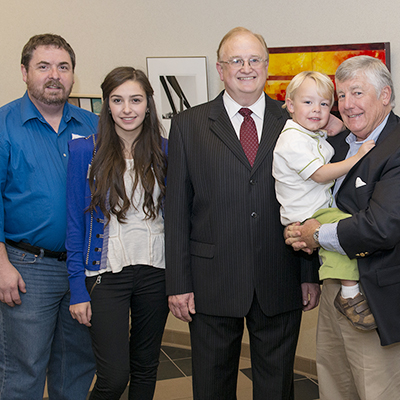 Title searchers, taxpayers and other visitors can now enjoy works of community art while they rifle through paperwork and wait their turn for service at the Rutherford County Property Assessor’s Office, thanks to a unique partnership between the county office and the MTSU Department of Art.

The new creative space is named for the family of Revolutionary War hero Col. Hardy Murfree, for whom the city of Murfreesboro was renamed in 1811. The sixth generation of Murfrees now live and work in the city.

“This is increasing all of our exposure to some of the things happening in our community and our county.”

Working alongside local businesses, the MTSU Department of Art, through the Todd Art Gallery, collaborated with assessor Mitchell to feature ongoing exhibits in the new Murfree Gallery.

It’s located in the lobby and antechamber of the property assessor’s office on the second floor of the County Office Building. The gallery’s first exhibit, scheduled through Jan. 30, 2014, includes work from students from the MTSU Department of Art and several noteworthy community artists.

“Rutherford County has a rich cultural history. I can think of no better way to celebrate it than through a partnership with Tennessee’s finest University, Middle Tennessee State University,” Mitchell said of the new gallery and the partnership.

“I believe we should strive to make better use of our public buildings for the benefit of our community. Hopefully this will be just one small step towards that goal.”

The featured community artists include local favorites Mary Watkins, Diane Stockard and John Smith, who recently began to paint iconic and nostalgic scenes of Murfreesboro and Rutherford County while he also served as a funeral director at Nashville’s Mount Olivet Cemetery.

Other community artists in the inaugural Murfree Gallery exhibit include Bobbie Bittner, Jack Freeman and Suzanne LeBeau of the Murfreesboro Art League and the Attic School of Art’s Pamela Mack and Carol Moliterno.

“The benefit that the Murfree Gallery brings to MTSU and the Department of Art is the expressed interconnectedness and benefits that exist between the university and our surrounding municipalities and county,” said MTSU’s Snyder, who also chairs the Murfreesboro City Hall Art Committee.

“For our students, this collaboration offers opportunity for real-world experience, particularly in the area of the growing trend of public facilities functioning as art spaces and limited public forums. For these MTSU students and those to follow, this type of opportunity is invaluable,” he added.

The Murfree Gallery will be open to the public during the regular County Office Building hours — weekdays from 8 a.m. to 4 p.m. — as well as the first Saturday of each month from 9 a.m. to noon. Special event hours will be announced when new exhibits get underway.

A dancer is captured in an exaggerated kiss by MTSU senior Davion Baxter during a trip to Taiwan in this photo included in the inaugural exhibit of the Murfree Gallery, which opens Nov. 22. Baxter is majoring in both photography and graphic design and plans to graduate this December. (Photo courtesy of Davion Baxter)

MTSU senior Nick Murphy’s untitled illustration is part of the inaugural exhibit of the Murfree Gallery. Murphy is majoring in both painting and graphic design. (Photo courtesy of Nick Murphy)

This painting by MTSU junior fine art major Lindsey Isbell, “Tendons (The Release),” is part of the inaugural exhibit of the Murfree Gallery. (Photo courtesy of Lindsey Isbell)

Murfreesboro artist John Smith’s trompe l’oeil painting — not photograph! — of the Rutherford County Courthouse is part of the inaugural exhibit of the Murfree Gallery. (Photo courtesy of John Smith)