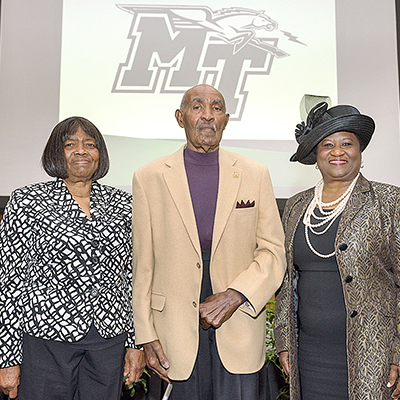 MTSU alumnus and author Michael McDonald knows struggle. He battled cancer as an adult and the mean streets of Buffalo, N.Y., as a child, leaning on his deep faith to lead and guide him all along the way.

“My faith today is stronger than it’s ever been in my life,” McDonald told those in attendance at the 18th annual Unity Luncheon held Tuesday inside MTSU’s Student Union. The event is part of a full slate of activities at the university in observance of Black History Month; this year focuses on “Civil Rights in America.”

Now serving as an area minister, MTSU’s first African-American student government president returned to campus to deliver the keynote address at the luncheon. His straightforward message included praise for the contributions of the three “unsung heroes” who would later be honored with awards for “achieving extraordinary things in an ordinary way.”

Sponsored by the MTSU Intercultural and Diversity Affairs Center and the Black History Month Committee, this year’s luncheon honored:

Butler, a World War II veteran and member of Prosperity Dilton Baptist Church, is a 33rd Degree Mason, a Shriner, a board member of the St. Clair Senior Center and a volunteer at the Room at the Inn shelter, among his many activities.

“If you can go through life and leave this place a little bit better than you found it, that’s why (God) put you here,” said Butler, who is now in his late 80s. His nickname “Link” stems from sharing the same birthday, Feb. 12, with President Abraham Lincoln.

He added a different spin to that nickname while he reflected Tuesday on the sacrifice of those who manned the picket lines during the civil rights era to bring about nonviolent change.

“I’m the missing ‘link’ between yesterday and today,” he said.

Martin is a founding member and church mother of New Hope Missionary Baptist Church and has been a member of Delta Sigma Theta service sorority for almost 60 years. She’s well known for her community service along with her family, many of whom became educators through her example.

“I just really feel blessed,” Martin said afterward, noting as she surveyed the room, “If I told you about half of the people in this room I taught, would you believe it?” Martin’s 37-year career in education included stints at Holloway, Central and Riverdale high schools.

Hickerson-Washington, a native of Shelbyville, Tenn., currently serves as coordinator of secondary instruction for Rutherford County Schools. She has worked on the boards of several service organizations, including MTSU’s National Alumni Association, Salvation Army Parks and Recreation and the MTSU Foundation, and she also is a member of and busy volunteer at Murfreesboro’s First Baptist Church.

“Those before me were the trailblazers where we could have the opportunities. They are the unsung. I think it’s everybody’s responsibility to help each other and lay the path where others will have opportunities.”

“I will never forget this,” she added. “This was a beautiful day.”

In recognizing the three honorees for their years of community service to others, Jonell Hinsey, interim director of the Intercultural and Diversity Affairs Center at MTSU, pointed to the courage, strength, wisdom and determination required to truly make a difference.

“It takes a village, but it also takes an individual, who will stand out and stand up,” she said. “Who will look up, then look out. Who will see, and then move.”

MTSU’s Unity Luncheon is one of the most anticipated events each year in the university’s observation of Black History Month. You can get more details about Black History Month at MTSU at http://mtsunews.com/black-history-month-at-mtsu-2014.