Ebiwonjumi, 17, who is from Lagos, Nigeria, participated in the Department of Computer Science’s second Hack MT that ended Sunday, Feb. 5, in the Science Building.

He pitched an idea on Day 1, but not enough people worked with him. Then he decided to “forget the idea and go work with other people and get the experience.”

The group captured first place in the event that brings software developers, visual designers, programmers, computer science and computer information systems students together with industry mentors to create programs and projects in 36 hours. Here’s a recap:

“It took us 26 hours to get it done,” Ebiwonjumi said after the excited team received the first-place award. “We actually created three maps for up to 100 players on one map, but my map did not function. The other two maps functioned well.”

Ebiwomjumi called his first hackathon “a huge learning experience. … I learned to work with people I had never met.” He also carried a MacBook laptop back to Belmont. He won it Sunday morning in a drawing.

MTSU received first-, second- and third-place honors, plus earned the Hackers Choice Award voted on by the competitors.

Yuxin Zhang, 22, a senior computer science major from Lanzhou, China, said she “learned new ways to interpret data and the exchange of ideas with each other.”

As sophomore computer science major Sam Remedios of Nolensville, Tennessee, told onlookers about their creation, upper classman physics and math student Ryan Florida of Nashville said their team benefited from being a mix of majors.

“We just had somebody (an industry mentor) come by and say our project could apply to first responders and to active shooter situations,” Florida said.

“This was our first experience with a back-end web server, so it was learn as we go,” Murphy said. “We all like to cook. Whether you use an app or look online, you can spend a lot of time scrolling back and forth. What we did is combine the two, where it’s all integrated.”

Yolanda Greene of Murfreesboro, Rutherford County marketing president for premier sponsor First Tennessee Bank, said her biggest takeaway was “how the kids connect to inspire them to create, identify and connect to a greater need in the community.”

“I don’t know the behind-the-scenes work, but I know it was a lot of work,” she said. “I’m hoping to meet some of these guys on the next level (when they seek employment after graduation).”

“Every cubby (hole) throughout the whole building was utilized,” said Dr. Chrisila Pettey, computer science chair and the event director. “And they were all really excited.”

Third-place MTSU “Game of Code” featured 32 team members. “Furby MT,” a personal assistant that talked, earned the Hackers Choice Award. It was a spinoff of the electronic robotic toy released in 1998.

Hack MT is a way to gather students from MTSU and other universities together with industry partners and alumni to gain experience that might lead to future employment.

The crowd attending the second Hack MT hackathon event at MTSU gathers in the Science Building’s Liz and Creighton Rhea Atrium during the judging portion of the event. 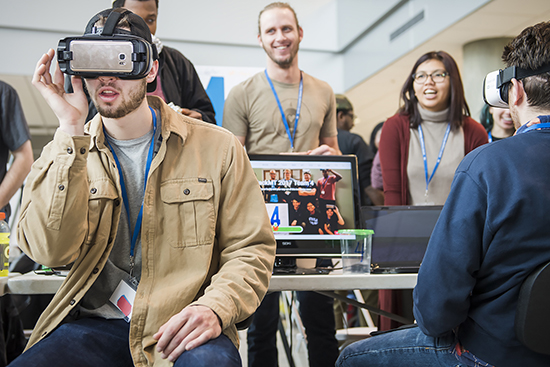 Attendees try out the first-place winner “VR-Maze.com,” a virtual reality maze game for up to 100 players per map, during the Feb. 5 MTSU computer science Hack MT in the Science Building’s Liz and Creighton Rhea Atrium. (MTSU photos by Kimi Conro)

At least a dozen universities and more than 300 tech-savvy collegiate minds will descend on the MTSU campus this weekend for the second Hack MT.

Year 1 was a rousing success for competitors, organizers and sponsors alike, becoming one of the College of Basic and Applied Sciences top events for 2015-16.

“Based on the follow-up survey results, the attendees really enjoyed it and the students learned a lot, developed more confidence and were excited about what they developed. Students and industry professionals alike wanted us to do another one.”

MTSU students, while slow to gravitate to this new idea for a hacking event a year ago, quickly swung the pendulum. They endured a lack of sleep and kept coffee and energy drinks flowing through their system, leaving ready for another Hack MT.

“We’ve done a lot of campaigning to bring fresh faces into this year’s hack-athon, and I’m hoping the diversity results in some really cool projects.”

“I’m a hack-athon veteran, so I’m fairly prepared,” Sheffey said. “I always come into a hack-athon with an idea for a project, so I can start working as soon as the event starts. As for my team, they’re ready to roll as well.”

“They’re learning their craft,” she said. “The more they do, the better they will be at it.”

Sheffey said the most important thing he has learned from the hack-athon experiences is the need “to allocate your team’s resources well.”

As for Year 2, Pettey’s hopes and expectations are that “more of our students would come, and whoever comes would have a good learning experience and have fun. Based on input we’ve been given, we’ve tweaked a few things and, hopefully, it will be a good event.”

Registration begins at 5 p.m. Feb. 3, followed by dinner at 6 and opening ceremonies at 7 p.m. in the Liz and Creighton Rhea Atrium. The public is invited to the opening and closing ceremonies; the closing event is scheduled for 11:30 a.m. Feb. 5.

To find parking and the Science Building, a printable campus map is available at http://tinyurl.com/MTSUParkingMap.

Organizers planning the second Hack MT computer event at MTSU are seeking additional groups of tech-savvy college and university entrants for the Feb. 3-5 event as the Jan. 27 deadline approaches.

So far, Belmont, Fisk, Regent and Union universities have joined MTSU in registering for the 36-hour event that brings software developers, visual designers, programmers and computer science students to the MTSU Science Building.

In this January 2016 file photo, MTSU Hack MT participating students share the results of their projects with judges and others attending the three-day, 36-hour event in the Science Building. (MTSU file photo by Randy Weiler)

In the inaugural Hack MT last year, 270 people registered and more than 200 participated during the weekend. In all, 16 products were developed by teams. Two of those were funded by MTSU College of Basic and Applied Sciences Dean Bud Fischer and the teams completed them.

MTSU’s Department of Computer Science is holding the event in collaboration with Hack Tennessee and the TN STEM Innovation Network.

For more information, call Dr. Chrisila Pettey at 615-898-2397. Pettey is chair of the Department of Computer Science.