August ‘Out of the Blue’ featu.. 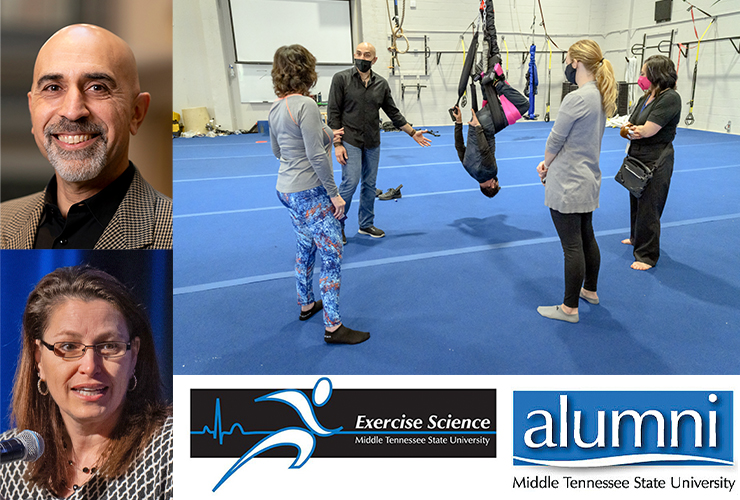 A recent MTSU alumnus is applying what he learned to cutting-edge research to help improve the health of performing artists.

Rawsam Alasmar, who graduated in 2021, is the first post-doctoral fellow in performing arts health, science and education at Johns Hopkins University in Baltimore, Maryland.

“My primary role there is to work in collaboration with faculty and staff between the Peabody conservatory and the Johns Hopkins Department of Physical Medicine and Rehabilitation,” Alasmar said.

The Peabody Institute, a conservatory dedicated to training musicians and dancers for elite-level performance, has been affiliated with Johns Hopkins since 1977. Alasmar, who is a dancer himself, specializes in Latin dances. However, neither show business nor exercise science was his first career.

With a bachelor’s degree in printing management and sciences and a master’s degree in electronic publishing and digital imaging, both from Rochester Institute of Technology in Rochester, New York, Alasmar worked in the printing business from 1993 to 2012.

But he felt unfulfilled. In his late 40s, he took a quantum leap into the unknown and pursued a doctoral degree in human performance specializing in exercise science at MTSU.

“I would rather change my life the last few years before I go to my graveyard and say that I died happy and content and not say it was too late,” Alasmar said.

Now, at 53, Alasmar is working at Johns Hopkins with physiotherapists, occupational therapists, nutritionists and other professionals in a multidisciplinary approach to injury prevention for performing artists.

“You have musicians who sit for hours to practice on certain instruments,” Alasmar said. “That is so repetitive that it could create certain postural imbalances.”

Part of Alasmar’s research is focused on determining whether verbal cuing or visual biofeedback is more useful in determining the best approach to helping performers use their physical attributes in a healthy way without compromising their artistry.

When Alasmar returned to MTSU again in May to visit the professors who nurtured his dream, he chatted with Sonya Sanderson, chair of the Department of Health and Human Performance.

“You always know when there’s that special person,” Sanderson said. “Just as soon as we sat down the very first time and started talking, I knew he was going to be great.”

In fact, Sanderson said she would try to persuade Alasmar to return to MTSU as a faculty member if an opportunity arises. She said Alasmar’s talent and passion would be terrific assets.

Meanwhile, Alasmar continues to push the traditional boundaries of both science and art, working on the dream he deserted a highly lucrative career to pursue.

“I want to be a servant to people, and the best way to do that is to find something that I’m able to do either through education or through health,” Alasmar said.

For more information about the Department of Health and Human Performance and the exercise science program, contact Sanderson at 615-898-5266 or sonya.sanderson@mtsu.edu.