Click on the image to view an electronic version of MTSU Magazine.

Cover Story:
Ahead of the Game
MTSU leads the statewide effort to reform teacher education

A Flying Start
Col. Greg Gregory’s lifelong commitment to aviation brings him back to the campus where his feet first left the ground

Five Minutes with the President
The Quest for Student Success

Ask an Expert
An Urban Development: College of Business Dean David Urban discusses the opportunities and challenges that lie ahead

“I AM TRUE BLUE!”
First Generation Deans at MTSU

Next month’s 2014 Winter Olympic Games in Sochi, Russia, will be the first Olympic games in a while without MTSU graduate Dr. Ken Wright (’84), a member of the board of directors of the U.S. Anti-Doping Agency (USADA), in attendance. Wright, who earned his Ph.D. at MTSU and who now serves as professor and director of the sports medicine program at the University of Alabama, has served as a doping control officer in three previous Olympics (London, Vancouver, and Salt Lake City) and has also worked with the U.S. Olympic Committee as an athletic trainer, educator, and presenter at meetings in China, Japan, the United Kingdom, Canada, and the United States. He is credited with helping standardize Olympic doping controls so that athletes around the world are held to the same standard.

It may seem counterintuitive, but more than two decades of involvement in anti-doping efforts have turned Wright into an optimist. Some 200 million Americans have a relationship with sports as participants, coaches, parents, or volunteers. The vast majority of them would never consider cheating and risking their health and safety by using or promoting performance-enhancing drugs (PEDs). But those aren’t the people who make headlines. “My view is that we should be thankful that people are taking time to incorporate integrity and honesty in sport,” Wright says. “They don’t get the attention the bad guys get.” 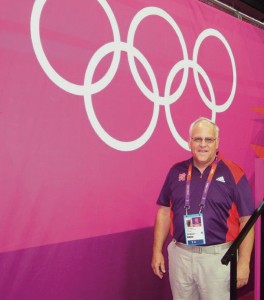 Wright is pinning his hopes on the USADA’s True Sport program, an effort to change the win-at-any-cost culture that can make young athletes vulnerable to the temptation of doping or even the seemingly innocent use of energy drinks that, while perfectly legal, contain unhealthy and potentially dangerous stimulants. True Sport provides resources for K–12 educators, coaches, and parents who want to teach young athletes to value ethics, integrity, and personal achievement, not just the final score.

This edition of MTSU Magazine showcases numerous examples of MTSU professors, students, staff members, and alums—some, even, who never quite got their degree from MTSU—who, like Wright, are affecting outcomes on a global scale and who represent the University with pride and respect. In my estimation, their collective stories serve as just another way of explaining what it means to be True Blue.