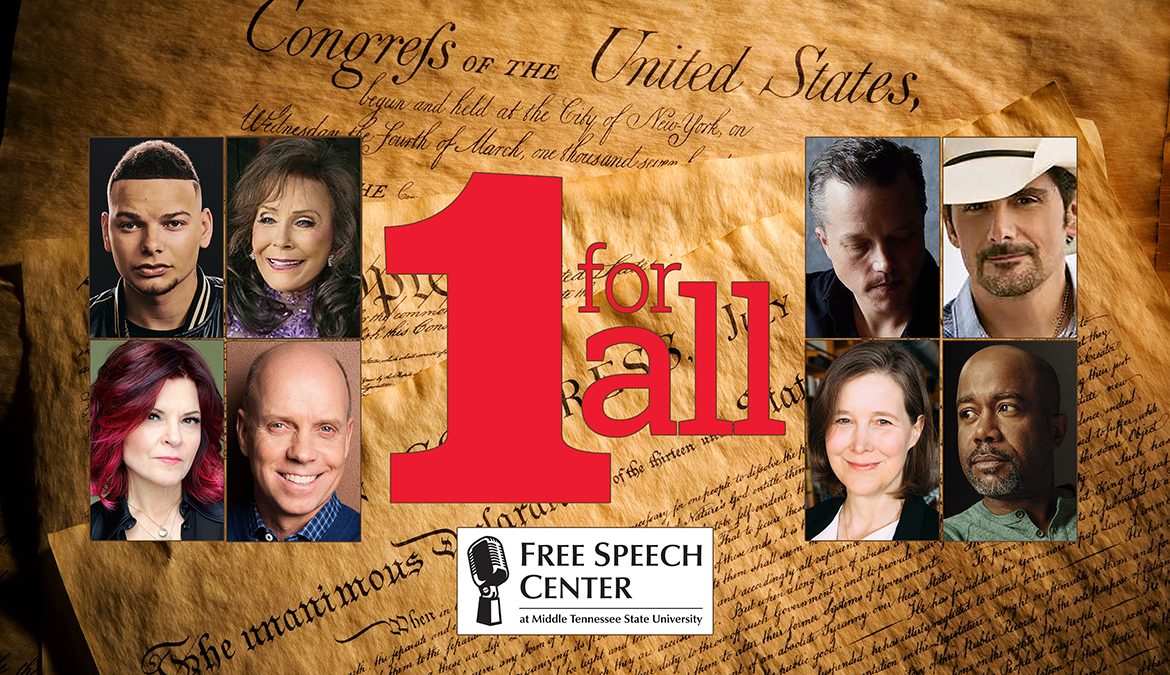 The Free Speech Center at Middle Tennessee State University wants all Americans to know and use their First Amendment rights, and its new awareness effort has some star-studded support to get out the word across the country.

“Over the past few weeks, we’ve seen the First Amendment in action on the streets of America,” said Ken Paulson, director of the Free Speech Center in MTSU’s College of Media and Entertainment. “Citizens using their freedom of speech, right to assemble, freedom of the press, the right to petition and freedom of faith have changed America for the better.

“Our goal is to have Americans better understand the scope and impact of the First Amendment and never take it for granted.”

Surveys by the Freedom Forum First Amendment Center indicate that one-third of Americans can’t name a single freedom in the First Amendment and that a vast majority have very little understanding of these liberties.

To remedy that, the campaign ads direct members of the public to http://1forall.today​, where they can learn all they need to know about the First Amendment, including tips on how to help preserve and protect these essential freedoms.

Lynn, a multi-Grammy-winning singer-songwriter and author with a career spanning six decades, makes her appreciation for the First Amendment clear in her typical blunt and succinct manner.

“My free speech showed up in songs like ‘The Pill’ and ‘You Ain’t Woman Enough (To Take My Man).’ I always say — and sing — exactly what I mean,” Lynn said in supplying the text for her poster for the campaign.

“We’ve still got some work, but we still got a dream,” Brown said, adding, “let’s use our freedoms of speech, press and assembly to build understanding and mutual respect. The dream is within our reach.”

Hamilton, a U.S. and world figure skating champion who won Olympic gold in the 1984 competition, said that protecting one of the First Amendment’s freedoms helps preserve them all.

“My faith is the driving force in my life every single day. Thanks to the First Amendment, what I believe, say and write is protected by this amazing one-of-a-kind nation,” Hamilton said.

This new 1 for All effort, which includes support from 1 for All program-founding partners The Tennessean, Gannett/USA Today, the Tennessee Press Association and the Tennessee Association of Broadcasters, also is being promoted by the Associated Press and news organizations across the country.

Brown, Lynn, Cash, Hamilton, Isbell, Paisley, Patchett and Rucker are being joined in the campaign by fellow First Amendment advocates:

• Aubrie Sellers, singer-songwriter and 2020 nominee for the Americana Music Association’s emerging artist of the year.

• Ruta Sepetys, bestselling author and winner of the Carnegie Medal.

• Michael W. Smith, multi-Grammy- and Dove Award-winning musician and author, saluted by ASCAP with its “Golden Note” lifetime achievement songwriting honor for his work in contemporary Christian and mainstream music.

All the campaign ads are available to view and download at https://mtsu.edu/first-amendment/page/1forall-gallery.

“We’re grateful to the artists and authors who support the campaign,” Paulson said. “They’re critical to ensuring that a new generation takes notice. We’re marketing the First Amendment to young citizens who can make history using its freedoms. 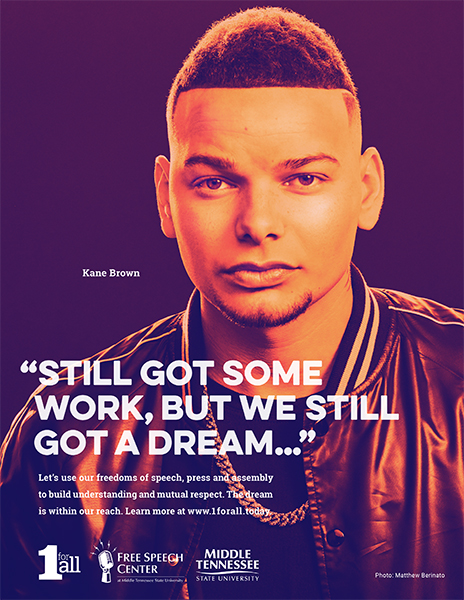 “The 1 for All campaign is nonpartisan and apolitical. Our only positions are that the First Amendment’s five freedoms are at the heart of a great nation and that every American needs to better understand and respect these core liberties.”

Established in August 2019 as a nonpartisan public policy center, the Free Speech Center at MTSU strives to build understanding and support for the five freedoms of the First Amendment through education and information.

The Free Speech Center’s resources include the unique First Amendment Encyclopedia, the world’s single most comprehensive free reference work on the five freedoms guaranteed by the first item on the U.S. Constitution’s Bill of Rights.

All center resources are open to the public anytime at http://freespeech.center. 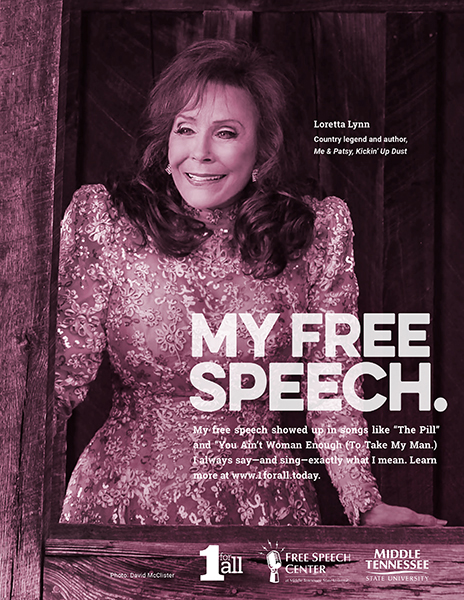 “We have scholars versed in democracy, media and government at the Free Speech Center, the John Seigenthaler Chair of Excellence in First Amendment Studies, our American Democracy Project chapter and the Albert Gore Research Center. We have a nationally recognized College of Media and Entertainment and both the expertise and facilities to create content for multiple media and platforms. It all fits together to make this mission possible.”

For more information on the 1 For All Campaign, visit http://1forall.today. For information about the Free Speech Center at MTSU, visit http://freespeech.center. And for more on MTSU’s College of Media and Entertainment and its programs, visit www.mtsu.edu/media.