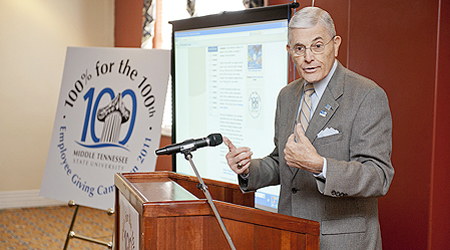 John Hood of MTSU’s Office of Community Engagement and Support thanks community and campus leaders for their support of the University’s “100% for the 100th” Employee Giving Campaign during the Oct. 25 kickoff. (MTSU photo by Andy Heidt)

MTSU wound up its 2011 Employee Charitable Giving Campaign by surpassing its $110,000 monetary target.

This year’s campaign theme, “100% for the 100th,” reflected the University’s effort to increase employee participation in its Centennial year among its 2,200-plus employees.

The $110,000 goal represented a 10 percent increase from last year’s giving total, said Dr. Gloria Bonner, special assistant to the president and chair of this year’s campaign.

“This landmark campaign total is notable not just in its magnitude, but in the profound impact it will have on the community at large and the citizens who are seeking assistance and support,” Bonner said.

“Adding to this fall’s momentum, MTSU not only set a record in the amount given to the campaign, but we continue to be encouraged by the number of campaign participants as well. … During this Centennial year, it is obvious that our University has a rich history, a distinct culture, a unique identity and a deep concern for the welfare of others.”

University President Sidney A. McPhee noted that “there are still many of our neighbors and our friends … in dire need because they are not as fortunate as we are, having a job and being able to support their families.

“I certainly believe that we have an obligation as members of this community in helping those (who) are in need, and the need is great and is growing,” McPhee added.

“We strive for everybody to give something—just something—to this important effort,” University Provost Brad Bartel  said.

Organizers noted that employees who gave $300 or more were eligible for prize drawings during the campaign. Grand prizes included three reserved parking spaces, complete with customized signs, that will be made available for the spring and fall 2012 semesters near the winners’ offices. A Dell netbook computer and other donated items also were offered.

Learn more about the drive anytime by visiting www.mtsu.edu/givemtsu.