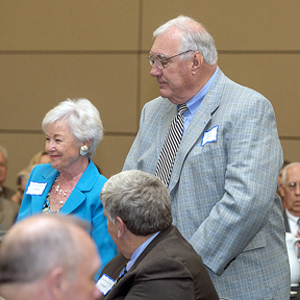 MTSU recognized community members who have made financial commitments to the university for the long term during Friday’s second annual 1911 Society Luncheon in the Student Union Ballroom.

The group, named in honor of MTSU’s founding year, celebrates individuals and families who have created gifts to the university through their estate plans. New members of the 1911 Society receive a framed rendering of Kirksey Old Main.

Also celebrated at the April 11 event were certain members of the Signal Society, which honors annual donors who have supported the university in 20 or more years. This group is named for Middle Tennessee Normal School’s first newspaper/magazine, The Signal, which was originally published in 1912.

Those recognized Friday were Signal Society members who had reached the 40-year plus milestone. Donors are given an engraved medallion reflecting their years of support.

For more information about becoming an MTSU donor, go to www.mtsu.edu/development and choose from the selection of tabs about giving on the left.

MTSU students John N. Sloss, left, and Emily West spoke at the 1911 Society Luncheon about how donor contributions provide the necessary scholarships and infrastructure improvements to help students like them succeed. The event, held Friday, April 11, in the Student Union Ballroom, honored those who have created planned gifts benefiting the university.

MTSU donors Tommy and Judy Smith were recognized Friday, April 11, during the second annual 1911 Society Luncheon honoring those who have created planned gifts benefitting the university. The Smiths were among several donors recognized for their 40-years plus of giving. The luncheon was held in the Student Union Ballroom.