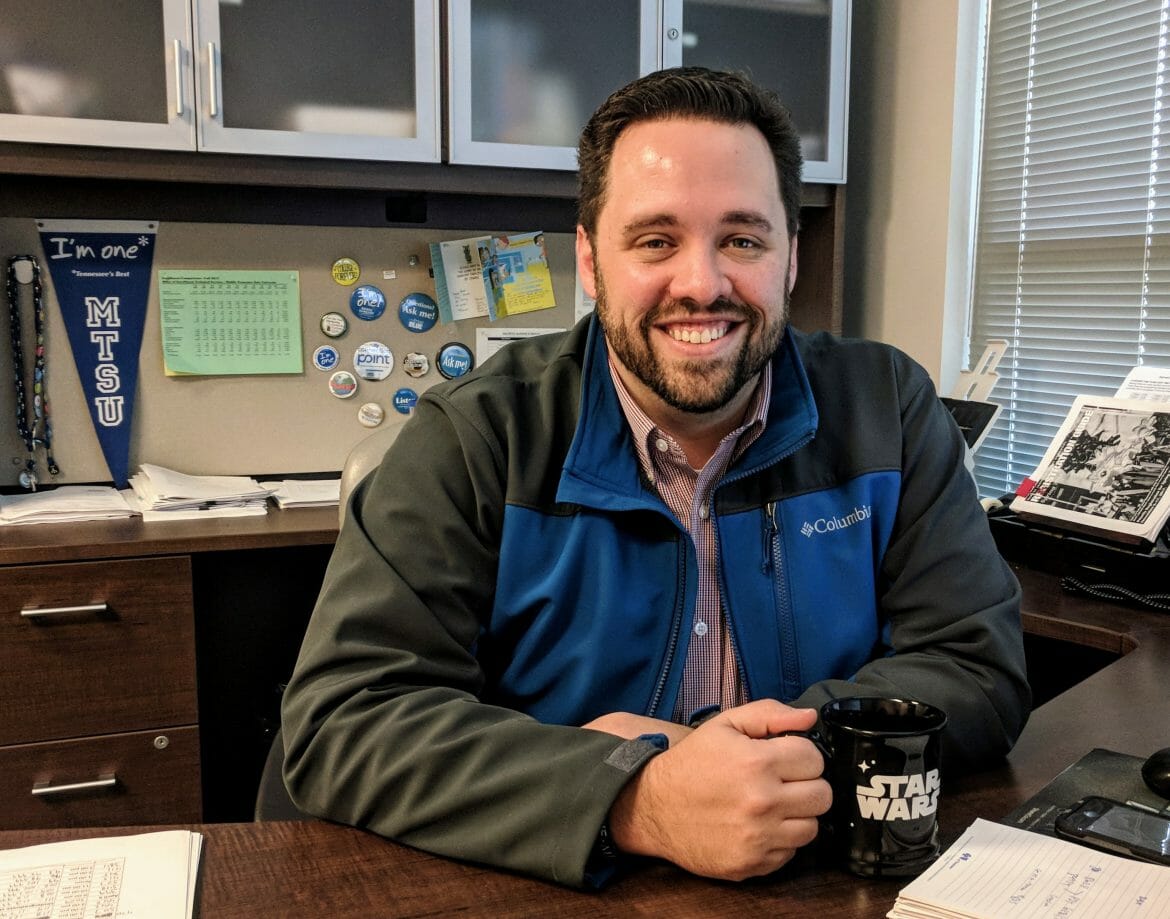 Today, the Student Voice is tossing 20 questions at the legendary Tyler Henson, the guru of MTSU’s “Class Of” Facebook pages. Read on for Tyler’s tales about online dating, the Dave Matthews Band, guarding Holiday Inn, and a totally legit reason to cut class. (Spoiler alert: Tyler Henson is literally Superman).

Important questions first: which Harry Potter house are you?

I want to say Gryffindor because everyone wants to be Gryffindor, but I’m probably more of a Ravenclaw.

What kind of student were you in college?

I was a nerd, and proud of it. I was valedictorian in high school, came here on scholarship, and was very focused and determined for most of my college career. Until about senior year that is, when I was pretty much done with school and ready to move on with my life. But I was a pretty dedicated student because I had aspirations of going to graduate school, so I knew that I had to do well in undergrad to get to that level.

What was the dumbest mistake you made as a freshman?

Believing that I could handle an 8 a.m., four-day-a-week honors calculus class. That was an awful decision that I immediately regretted. It involved one 72-hour period where I didn’t sleep in order to get a 14-page math paper done, but I came out with an A.

How did you meet your spouse?

We tell everyone that we met in college because we both graduated in 2004. But the reality is, we met through Facebook in the early, early days. I was on Facebook in 2005 when it was only available for certain “.edu” addresses. The day it came available for MTSU, I was on there, and we connected because we had a common friend. I thought that we had met and I had just forgotten her, and I was really confused. I was like “Who is this person? Well, she’s beautiful, so I should definitely message her and figure out how I know her.” So that’s how we got to talking, and a year and a half later we were married. So we predate eHarmony and all the cool online dating places.

What was the weirdest job you ever had?

As a college freshman, I was an unarmed security guard at the local Holiday Inn. I worked an overnight shift from ten at night to six the next morning, because they had a bar and they needed a guard in case there were any issues with the bar patrons. Which was funny, because I wasn’t even old enough to legally go into the bar at the time. But I had a lot of unique experiences there. You end up meeting a lot of very interesting people when you work an overnight security shift at a hotel bar!

What job would you be doing if you weren’t doing this?

Well, I majored in psychology in undergrad, and I originally had aspirations of being a psychology professor and researcher. But if I had my choice, I’d be an award-winning director in Hollywood. That Intro to Motion Pictures class inspired me!

Which Monopoly piece are you?

What was the last thing you dressed up as for Halloween?

This past Halloween, I dressed up as Superman because my daughter was Wonder Woman and of course we had to match. It’s imperative that you match your kid. I’m not usually a dress-up guy, though. The extent of my costume is usually carrying around a box of Cheerios and saying I’m a “cereal killer”. I’m more of a subtle costume kind of guy. But if your kid’s going to be Wonder Woman, duty calls and you have to match, so I flew into action to save the day! But we’re talking like a Superman T-shirt; there were no tights involved. I draw the line at tights.

What book have you re-read the most?

I’ve been working on a dissertation for nine years, so I haven’t had a lot of time for fun reading, but I’ve read the Harry Potter series several times because I just love it so much.

What is something that you collect?

My wife and I collect magnets from wherever we go; whether it’s just a quick business trip or an actual vacation, we always get a magnet. Our fridge is just a hodge-podge of things we’ve done and places we’ve seen. It’s great because magnets are pretty cheap at gift shops, and two they come in handy to hold up kindergarten artwork on the fridge.

I haven’t traveled there yet, but we’re going to Rome in October, so that will be the coolest place I’ve ever been. The coolest place that I’ve already been to is the Mayan ruins in Mexico, and that was pretty fascinating. The year that we went was pretty close to the 2012 “end of the world” Mayan calendar thing, so it was neat to be there when the Mayans were at the forefront of the news.

Anything with peanut butter, but unfortunately my kid’s allergic, so I can only eat peanut butter in small quantities when I’m here at work. But now it’s even more special when I get to eat something like a peanut butter cup, because it’s so rare!

Well, I grew up in the Dave Matthews Band era. I don’t know if people even listen to him anymore, but I was a 90’s kid, so I’d have to go with that.

What do you do when you’re stressed?

I wish I had something cooler to say, but typically I eat. Stress eating is a thing!

What was the best class you took in college?

The class I had the most fun in was Introduction to Motion Pictures because all we did was watch and discuss movies. It was pretty exciting for a movie buff like myself. I don’t think I really learned anything, but it was really fun. It was one of those classes that nobody ever missed.

What was the best reason you ever had for skipping class?

It was a gorgeous spring day, and I had been talking to this girl I was interested in over by Peck Hall, on the side near the KOM. I had to go to class, to Computer Science Orientation, so I said goodbye and went to the KOM and took a seat next to the window. It was a minute before class and the professor wasn’t there yet, and I looked outside and the girl was still sitting out there. I looked around and realized I hated this class, so I just got up, walked out, and went and talked to the girl for the rest of the day. Spoiler alert: it ultimately didn’t go anywhere, but at the time it seemed like a really great reason to skip class.

What TV character are you?

I am definitely Ross from “Friends”. Even though I’d love to be Chandler, I’m definitely not witty enough, and I was never as smooth with the ladies as Joey, so sadly I am Ross.

What’s a unique skill that you have?

I’m really good at getting on my child’s level and playing like a 6-year-old instead of a 37-year-old. We play with Nerf guns, Legos…all the fun stuff that you want to play with as an adult, but people tell you that you can’t. So really I had a kid just so I could play with my toys again.

How did you become the MTSU Facebook guru that you are today?

Ironically, Facebook has nothing to do with my job! I don’t know if people think that it’s actually part of my job to be on Facebook, but it’s just something I kind of lucked into.  When I took the job that I currently have at the scheduling center, there wasn’t really a student interaction component, so I just started getting on Facebook and answering questions. It just morphed into what it is today, where I’m on six different student pages plus a parent page. I don’t do it because it’s required or anything, but because students have questions and they need guidance. Plus I get to put memes and GIFs up and be sarcastic sometimes, and that makes me happy! And when I work graduation ceremonies, it’s really cool to meet people that I’ve helped on Facebook when they’re graduating in real life.

What’s your favorite part about being a Blue Raider?

Oh my gosh, I’ve been a Blue Raider since 1999, when I started here as an undergraduate. I just kind of stayed around until they started paying me instead of me paying them! It sounds cliche, but being on the side that I am now, I can see how the people who work for MTSU really care about the students. As an undergraduate, I think I had this perception of “they’re just here to take our tuition dollars”; I had all the same thoughts as a student that I see people on the Facebook page have today. But being on this side now, I know that’s not the case, and I know that so many things the administration does are really in the best interests of the students. You see so many people on this side who really want students to succeed and keep that on the front of their minds. And that’s ultimately why I got into higher education; I love student interaction and letting people know that there are answers to their problems.