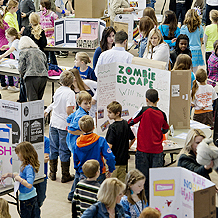 Fourth-graders, their teachers and family members set up their projects during the 2012 Invention Convention in MTSU’s Murphy Center Feb. 20. (MTSU photos by Andy Heidt)

Hundreds of supportive teachers and parents from across middle Tennessee gathered in MTSU’s Murphy Center Feb. 23 to support an impressive group of bright and dedicated young inventors.

The young inventors selected to represent their grades and schools worked either individually or in small teams to create projects featured in the categories of “Games” or “Make Life Easier.”

Hailey Johnson, the sixth-grade inventor of “Drink on the Go,” a helpful creation designed to keep a drink from tipping over while the user is pushing a shopping cart, said her decision to enter the competition was easy.

“When my teacher told me about it, it sounded really fun!” she enthused, adding that she was “really proud to be here.”

Every project featured a visual presentation as well as a working model demonstration by the inventors for judges and visitors.

“I’m so proud of you. You are an inventor. You’ve taken the time to think and create, problem-solve and literally create something that wasn’t here before you made it,” Dr. Tracey Huddleston, founder of MTSU’s Invention Convention and a professor of elementary and special education at the University, said in welcoming the youngsters.

“I also want to challenge you today to go beyond this invention, to continue to think and problem solve and create and dream and continue to make this world a better place. In your hands is our future.”

John Dwyer, news anchor and reporter for the ABC affiliate WKRN-TV in Nashville, was the event’s guest speaker. He told the young inventors that his favorite invention is the hot-air popcorn popper because it eliminated the potentially dangerous hot oil previously used to make the tasty treat.

Dwyer also encouraged the young people to continue inventing and working together to reach goals because “not trying is failure.”

Each participating inventor left the convention a winner with a certificate of participation and a gift of this year’s selected “feature invention,” tubes of ChapStick lip balm, invented in the early 1880s by a Virginia physician.

The event was sponsored by State Farm insurance.

For more information on the Invention Convention, including the contest rules, visit www.mtsu.edu/elementary/invention_convention.shtml or contact Huddleston at Tracey.Huddleston@mtsu.edu. You also can watch a video about the 2012 event below.