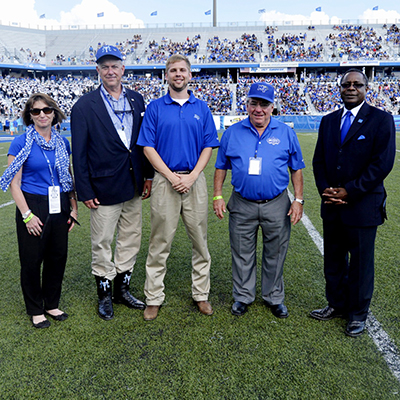 Many Middle Tennessee State University alumni bring the university prestige and distinction through their innovative work and loyal support.

Every year since 1960, MTSU’s Alumni Association has recognized accomplished alumni with the association’s highest honor: the Distinguished Alumni Award. Younger alumni who are making a positive impact in the world are eligible for the Young Alumni Achievement Award.

This year’s honorees include a nonprofit innovator, Keith Taylor of New York City; a pair of high-powered Tennessee businessmen, Stephen Smith of Brentwood, Tenn., and Larry Cox of Knoxville, Tenn.; and Aaron Carlton of Eagleville, Tenn., and Caracas, Venezuela, a young expert in foreign service.

The four men were recognized during this weekend’s Homecoming 2013 events.

Smith, Cox and Carlton rode in the Oct. 5 MTSU Homecoming Parade and were introduced at the end of the first quarter of the football game between the Blue Raiders and East Carolina University Pirates. Taylor planned to attend but had to cancel his visit.

The four alumni also will be recognized during a 2014 commencement ceremony.

While a faculty member at MTSU, Taylor began using $350 of his paycheck to give small grants to low-income families to see them through unexpected financial crisis. He transformed this hobby into a nationally acclaimed online nonprofit, ModestNeeds.org.

Strangers visit the website, choose a grant recipient they would like to help and donate online. His organization has been called the “future of philanthropy” and has been covered in press outlets such as Forbes, People, USA Today, The Today Show, the CBS Morning Show and more.

♦ Service to the University: Stephen Smith, Class of 2011

Smith has a lengthy history of involvement with MTSU. He has served on the Blue Raider Athletic Association President’s Council and board of directors.

Smith chaired the search committee for MTSU’s director of athletics and spearheaded the successful effort to raise $5 million to construct a new baseball facility, which is named in honor of his late father, Reese Smith Jr. The Stephen B. Smith Clubhouse and Indoor Training Facility is named for him.

Click on the logo above for more MTSU alumni news.

Stephen Smith also received the Tennessee Board of Regents’ Chancellor Citation for Excellence in Philanthropy.

Larry Cox is a well-known volunteer and philanthropist in the Knoxville area. The list of his nonprofit involvement is very lengthy, as are his awards; one recommendation letter written on Cox’s behalf called him “an iconic leader and an example of the servant leader the next generation should emulate.”

Cox is the owner of Homestead Egg Co., Chicken City and Cox Family Leasing. He also is a field representative for Congressman John Duncan and founding member of Emerald Youth Foundation, which works to grow leaders in decaying urban neighborhoods.

After serving in the U.S. Army, Carlton joined the U.S. Department of State as a foreign service officer. While serving in Uganda, he drafted the Department of State’s annual reports on human rights, human trafficking, child labor and religious freedom. He also assisted the Ugandan government in starting their own Prevention of Trafficking office and task force.

Carlton moved on to serve as a reporting officer and adviser at the United Nations in New York City. He recently finished training for his next assignment, which will be as a consular officer in Venezuela.