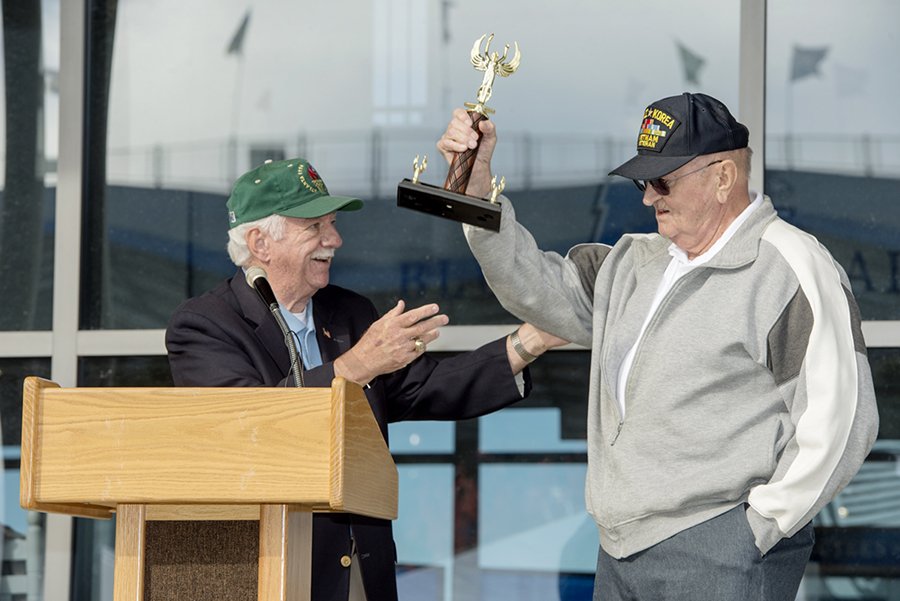 As part of MTSU’s “Red, White and Blue Weekend” two days before the nation honors its former service members and active-duty personnel on Veterans Day, the university rolled out the red carpet for hundreds who served or continue to serve their country.

Activities included a ceremony at the MTSU Veterans Memorial site outside the Tom H. Jackson Building; a picnic and presentation of the 24th annual Joe Nunley Award at the Emmett and Rose Kennon Hall of Fame; and a musically inspired halftime full of patriotism in Floyd Stadium.

“I’m really excited about receiving the award,” Ed Smith added. “It really is a great honor, not just an honor for me, but it’s an honor for everybody that’s ever worn the uniform.”

Past Nunley recipients Warren King and Em Ghianni of Nashville and Charles Jones of McMinnville sat with Smith during the ceremony.

Col. John Furgess, an MTSU alumnus, announced that the Nunley award committee has decided that the 2014 award will be in honor of all World War II veterans and will be the final Nunley presentation.

Members from the local Rolling Thunder organization take down an old Prisoner of War/Missing in Action flag and replace it with a new one.

Enderson said the swearing-in ceremony “gave me a sense of pride to show my support for veterans who came before me, and continue a tradition of service for my country.”

U.S. Army Maj. Gen. N. Lee S. Price served as guest speaker for the MTSU Veterans Memorial ceremony. With a theme of “women veterans,” Price shared how far women have advanced in military service, but that they still have more to achieve. Price is the Army’s first female program executive officer. She guides a workforce of more than 1,800 personnel who execute an annual budget of $4 billion.

Representatives of the famed World War II Navajo Code Talkers attended several of the events. They and all the veterans attended the MTSU-Florida International football game.

At halftime, the nearly 340-member Band of Blue performed official military songs as each of the branches of military went across Jones Field. American Idol top-10 finalist Kristy Lee Cook sang “God Bless America.” Blue Raider football player and former Marine Steven Rhodes carried the U.S. flag while leading his teammates and coaches onto the field before the game. His wife, Adrienne, a U.S. Navy veteran, walked across the field with her fellow veterans at halftime.