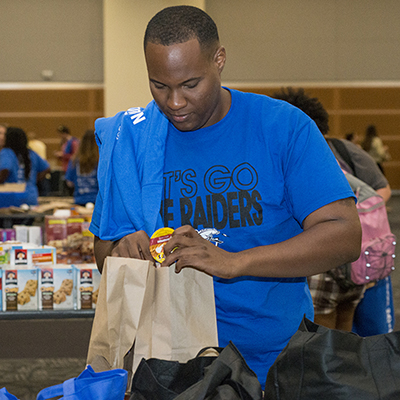 MTSU freshmen paused from their first year of college instruction Friday to give back to the community in a big way.

The Freshman Day of Service took place from noon to 3 p.m. Friday in the Student Union Ballroom.

You can watch a video from the project below.

Hannah Fox, philanthropic coordinator for MTSU’s Student Government Association, said more than 400 bags were packed within the first hour of the event. Fox said the volunteers’ goal was 2,017 snack packs because 2017 is when most of the new freshmen will graduate.

They easily surpassed their goal by almost 500 packs.

“I remember my schools had programs like this where we’d give to the community for free, and some people couldn’t afford it, especially where I came from,” said Brandon Fischer, a freshman from Kansas City, Mo.

“The Freshman Day of Service is a great way for incoming students to immediately live out the True Blue Pledge by being engaged in the life of the Rutherford County community,” said Jackie Victory, director of leadership and service.

Freshmen were invited to volunteer for 20 minutes between classes or for the duration of the event. Other members of the campus community also showed up to help, regardless of their years at MTSU.

“I never think it’s too soon to be engaged, and especially to be engaged in the local community,” said Meagan Flippin, president and chief executive officer of the United Way of Rutherford and Cannon Counties, a co-sponsor of the event.

“I think it’s excellent that MTSU has engaged the freshmen early on in being good corporate and volunteer citizens.”

The event was a “Connection Point,” part of a program designed to connect new students with the MTSU community and help them become fully integrated into campus life.

“Students who are involved with campus life tend to perform better academically and are more likely to graduate than those that don’t,” organizers say on the Connection Point webpage at www.mtsu.edu/stuaff/connect.

MTSU’s Student Government Association, the Office of Leadership and Service and United Way sponsored the Freshman Day of Service.

For more information on volunteer projects at MTSU, call 615-898-5812 or visit www.mtsu.edu/leadandserve.

MTSU junior Ryan Peters, a political science major from Whiteville, Tenn., fills a “snack pack” with healthy food choices for local children Friday amid a roomful of campus volunteers at the 2013 Freshman Day of Service. (MTSU photos by Darby Campbell)