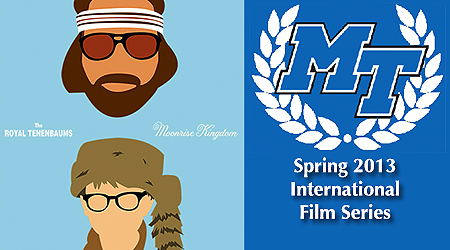 A critically acclaimed American film will kick off the spring 2013 semester’s International Film Series at MTSU.

Director Wes Anderson’s “Moonrise Kingdom,” recipient of the American Film Institute’s 2012 Film of the Year Award, will be shown as the second half of a double feature with another Anderson movie, “The Royal Tenenbaums.”

The twin screening will start at 5 p.m. Saturday, Feb. 16, in the Student Union Building Theater.

Set on an island off the coast of New England in the summer of 1965, “Moonrise Kingdom” tells the story of two 12-year-olds who fall in love, make a secret pact and run away together into the wilderness.

As the authorities try to track them, a violent storm brews offshore, and the peaceful island community is turned upside down.

Other films in the series include “Chico & Rita,” a 2010 animated film from the United Kingdom and Spain, which is slated for Saturday, March 23, and “Where Do We Go  Now?,” a 2011 movie from Lebanon, which is scheduled for Saturday, April 20. These films will begin at 7 p.m.

All films are free and open to the public. For more information, contact the Office of International Affairs at 615-898-8190 or MT Student Programming at 615-898-2551, or visit www.mtsu.edu/events/intlfilms.php.