Get discount tickets for 'True.. 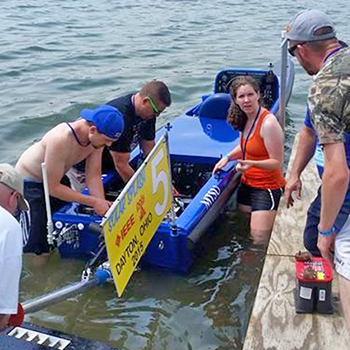 The team’s confidence with the solar boat they nicknamed “True Blue” lived up to their expectations in the 2015 Solar Splash, an American Society of Mechanical Engineers-sponsored event.

MTSU solar boat team members are shown with their vessel, “True Blue,” during a break in the action at the 2015 Solar Splash competition on Lake George Wyth in Dayton, Ohio. The team placed second overall in the national event. (Submitted photos)

With its highest finish ever, MTSU placed second to host Cedarville University in the 16-team event held on Lake George Wyth.

Solar Splash, officially named the International Intercollegiate Solar/Electric Boat Regatta, is the world championship of intercollegiate solar/electric boating. Teams come from across the country to compete.

“I’m extremely proud of the team’s effort and showing,” said Saeed Foroudastan, adviser and director of the university’s Experimental Vehicles Program. “The forethought, dedication and engineering improvements that were necessary to bring this year’s entry to fruition earned eight awards, the greatest number of honors to date at the Solar Splash competition.”

The eight awards include:

“It went well with new batteries, but not as well as we would’ve liked, but all in all, it was good,” Blankenship said. “I’m very happy and proud of finishing second. I was nervous during the race because there had been a few collisions.”

“We achieved 24 miles per hour. That’s the fastest we’ve gone,” Sprouls added. “We did not have a single problem. … The other boat, from Cedarville, was really fast. We sharpened the edge of the propeller. It made us a little faster, but we were still behind them.”

Even with the best lead-acid batteries that MTSU can buy, the top speed lasts only about one minute, said Sprouls, a mechatronics engineering major.

Blankenship, a double major in physics and math, also will be a member of the 2015-16 team. The team will be captained by Sprouls and plans to design a new boat.

“We’ll start with a blank slate,” Sprouls said. “Hopefully, it will be as nice as this one.”

This year’s MTSU entry was a modified version of the boat that competed in 2014.

The MTSU Experimental Vehicles Program is housed in the Department of Engineering Technology, one of 11 departments in the College of Basic and Applied Sciences.

For more information about the program, call 615-494-8786 or email Foroudastan at Saeed.Foroudastan@mtsu.edu.