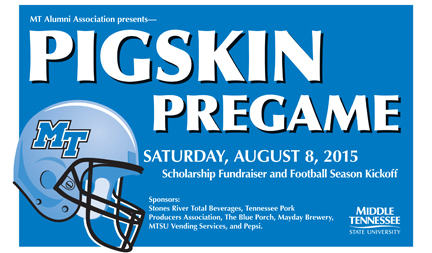 The annual Pigskin Pre-Game will once again kick off the MTSU Blue Raiders football season, set this year for Saturday, Aug. 8.

A fundraiser for the Alumni Legacy Scholarship, the event will start at 6 p.m. Aug. 8 and will help serve as the grand opening for The Grove at Williamson Place. Tickets for the event are $35 each, and attendees should prepay and make ticket reservations by 4:30 p.m. Wednesday, Aug. 5.

MTSU Alumni Relations assistant director Paul Wydra uses a plastic tie to make an adjustment on the sign for the Saturday, Aug. 8, Pigskin Pre-Game, a prelude to the 2015 Blue Raiders football season. The event will be held starting at 6 p.m. at The Grove at Williamson Place. (MTSU photo by Randy Weiler)

The Grove at Williamson Place is located at 3250 Wilkinson Pike in Murfreesboro, just off Medical Center Parkway across from Embassy Suites Hilton and near Interstate 24.

“We are happy to showcase The Grove at Williamson Place since it is a beautiful new venue in Murfreesboro in a great location, and Pigskin Pre-Game is their official grand opening for their terrific facility,” said Paul Wydra, assistant director in the Office of Alumni Relations.

The Grove at Williamson Place is operated by Brandon and Katherine Whitt. The couple are MTSU alumni and recipients of the 2014 national Young Farmers and Ranchers Achievement Award.

All proceeds from the Pigskin Pre-Game, which is presented by the MTSU Office of Alumni Relations and the MT Alumni Association, benefit the scholarship, which is awarded to children or grandchildren of MTSU alumni.

“We have awarded almost $30,000 in scholarships the last five years, largely because of the support we receive from the community, our outstanding sponsors and the MTSU faculty and staff for events like Pigskin Pre-Game every year,” Wydra said.

Free parking is located on-site. The event will be held rain or shine.

For additional information about Pigskin Pre-Game, sponsorship opportunities or to reserve tickets, call 800-533-6878 or visit www.mtalumni.com.

Payment for tickets also can be mailed to the Office of Alumni Relations, MTSU Box 104, Murfreesboro TN 37132.

Click here for more details and to register for the 2015 Pigskin Pre-Game.

Attendees go through the food line during the 2014 Pigskin Pre-Game event in Rockvale, Tenn., in this file photo The Grove at Williamson Place serves as this year’s venue Saturday, Aug. 8. (MTSU file photo by Lynn Adams)