Alumna's work is focus of new .. 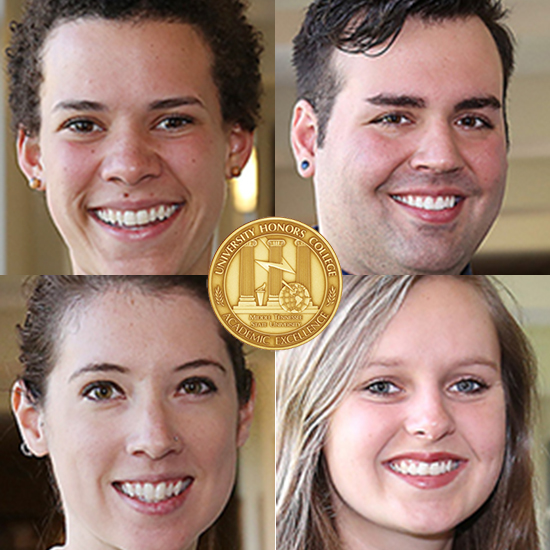 The U.S. State Department sponsors the Fulbright program to increase mutual understanding between people in the United States and other countries by placing U.S. students in other nations to teach or conduct research for eight to 10 months.

In the past six years, 13 MTSU students have received Fulbright fellowships. In 2012, MTSU was named a top-producing Fulbright institution.

Eakes, a semifinalist for a teaching Fulbright in Andorra, a tiny nation between Spain and France, graduated in August 2015 with a double major in global studies and Spanish. She was the 2014-15 area coordinator of the Global Learning Community for MTSU Housing and Residential Life.

Eakes has acted as an interpreter in a school system and taught GED classes for the Hispanic Family Center. She volunteered in the local elementary school during her study-abroad year in Costa Rica and has also worked in a horse range in the Great Smoky Mountains National Park.

Lauderback, a semifinalist for a teaching Fulbright in Germany, graduated from MTSU in August 2015 with majors in political science and global studies.

Lauderback volunteers as an English teacher for Catholic Charities and has worked with families from Myanmar, Congo and Somalia. He studied abroad in Switzerland and also served as a global ambassador as an MTSU undergraduate. He plans to apply for Yale University’s Institute of Global Affairs master’s program in combination with the Peace Corps.

Leonard, a semifinalist for a teaching Fulbright in Poland, is a biology graduate student and received her undergraduate degree in biochemistry from MTSU. She was an Honors College Buchanan Scholar from 2009 to 2013.

In 2014, Leonard visited China as a National Science Foundation East Asia Pacific Summer Institute Fellow. She has a teaching assistantship from MTSU’s Department of Biology and has conducted science research but also is very passionate about teaching and helping students develop their intellectual potential.

Paul, a semifinalist for a teaching Fulbright in Thailand, is currently a Buchanan Scholar majoring in interdisciplinary studies.

Paul has spent the past three years teaching English as a second language to refugees and immigrants in a low-income housing community. Her love of teaching has inspired her to make four mission trips, where she taught in Bangkok and in a Korean refugee camp in northern Thailand and performed volunteer work in an orphanage.

She lives in a Smyrna housing project among Korean refugees and is a recipient of the state’s Harold Love Outstanding Community Service Award.

Laura Clippard, who directs the Honors College’s Undergraduate Fellowship Office, worked closely with each student on their application, Vile said.

“The U.S. Student Fulbright program is a great match for our MTSU students,” Clippard said. “MTSU has very motivated, hard-working and caring students who are interested in international affairs.”

Clippard also assists students with other national and international opportunities and has students currently waiting to hear from the Critical Language Scholarship, Princeton in Asia and Latin America and the DAAD RISE scholarship in Germany.

Clippard herself is a Fulbright semifinalist for an International Education Administrative program to spend two weeks in South Korea this summer.