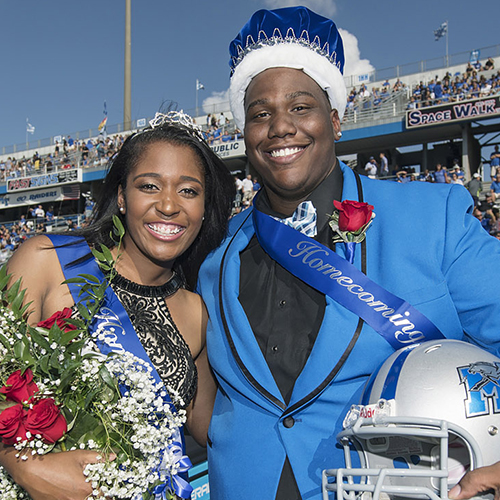 For old and young alike, MTSU Homecoming 2016 featured lots of fun pregame events Oct. 15, including the annual parade down East Main Street, children’s activities and plenty of food and drink at tailgating, alumni and departmental lunches.

Fans, cheerleaders  and the Band of Blue greeted the Blue Raiders during the Raider Walk.

Surrounded by previous recipients, the 2016 homecoming king and queen, Denarius Stinson and Megan Berry, were crowned during halftime festivities.

Conference USA rival Western Kentucky played the role of spoiler, emerging with a 44-43 double overtime victory in a game decided by a missed extra point.

MTSU cheerleaders and the Band of Blue lead fans in cheering on the Blue Raiders during their walk in Walnut Grove as they head for the stadium. (MTSU photo by J. Intintoli)

Mixer on Main on the President’s Lawn provided a perfect place to view the annual MTSU homecoming parade, plus enjoy lunch with other alumni and friends.(MTSU photo by Kimi Conro)

MTSU students are in a festive mood as they tailgate in Walnut Grove before the MTSU-Western Kentucky homecoming game. (MTSU photo by J. Intintoli)

MTSU fans get their homecoming ‘game’ on for activities [+VIDEO]

Playing off the popular Monopoly board game, “Raideropoly … This is How We Roll” is the 2016 MTSU homecoming theme.

There are numerous events for students, alumni and friends of the university as homecoming — an annual rite of autumn in the middle of the semester — is celebrated. They include:

“Homecoming is a celebration of what MT means to its students, alumni and community,” said Rhonda King, alumni relations assistant director. “It’s important to celebrate the people you met and the relationships you made through the university. Homecoming gives everyone a chance to enjoy themselves as part of the Blue Raider family. We want you to return to campus and see what MTSU is today.”

“Whether you graduated five months ago or are celebrating your Golden Raider 50th Reunion, it’s time to come home to Middle Tennessee,” King added.

“‘Raideropoly’ has been such an exciting thing to plan and I am so excited to see everyone’s hard work pay off,” Tabor said. “Homecoming has always been my favorite time of the year. I love being a Blue Raider and homecoming just lets me express that.”

The student kickoff event will be a first-time event — a glow paint dance party starting at 7 p.m. Oct. 12 at the MTSU RV Park near Greenland Drive.

“The music, lights, and paint flying around is going to be insane,” Tabor said. “I am so excited for this event and I can’t wait to be covered in paint.”

Calling the parade at the MTSU Alumni Association’s 11th annual Mixer on Main will be Chip Walters (Class of ’85), the voice of the Blue Raiders, and Beverly Keel (Class of ’88), recording industry chair and music industry insider.

Open to all, Mixer on Main will be a family-friendly place to watch the parade. Souvenir photos and children’s activities are planned, along with refreshments and music.

Because of the Middle Tennessee Boulevard redesign project, MTSU officials urge attendees to exercise caution when crossing at intersections and while standing on the sidewalks, which are part of the construction zone, during the parade.

The coronation of the 2016 Homecoming Queen and King will take place on the field. Past alumni recipients will join them.

Featuring “Raideropoly” as part of the theme, board games will be utilized during part of MTSU homecoming week activities and among many events leading to the Blue Raiders football game against Western Kentucky at 1:30 p.m. Oct. 15. (Submitted graphic)