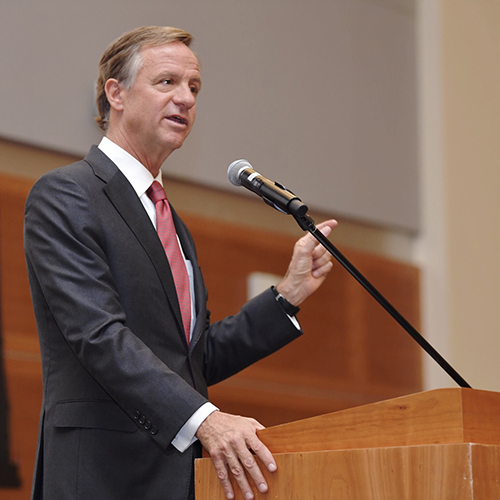 Tennessee Gov. Bill Haslam not only loves veterans who served their country, but he wants them in Tennessee’s workforce.

Keith M. Huber, center, MTSU senior advisor for veterans and leadership initiatives, discusses the importance of the Daniels Center Veterans Transitioning Home during a tour of the center at the March 8 Veteran Education Academy hosted by MTSU. (MTSU photos by Andy Heidt)

“We’re competing with states and countries all over the world for the right workforce,” said Haslam. “Veterans are a competitive advantage for us. One of the things we are trying to do is have a veterans’ task force to help ease the transition for veterans as they come back into public life. Education is a key piece of that.”

The governor said student veterans “enrich the campuses across the state with their life experiences, leadership, wisdom, commitment and determination to persevere. This population is a critical piece of our Drive to 55 initiative to increase the number of Tennesseans with a postsecondary degree or credential to 55 percent by 2025.”

In addition to touring the Daniels Center, attendees heard presentations from representatives of the Student Veterans of America, the Tennessee Higher Education Commission, Tennessee Board of Regents and Tennessee Army National Guard.

Keith M. Huber, MTSU senior adviser for veterans and leadership initiatives, told the group the MTSU “approach to life is one of being a student of life. We learn by the people we have the privilege to interact with every day.”

Huber, who obtained the THEC grant for the Veterans Transitioning Home Office, also is a retired lieutenant general who served nearly 40 years in the U.S. Army.

“You are a star,” Grinder said of Peterson, who traveled to each of Tennessee’s three grand divisions to share her work. “I want to see where this is going to take us.”

Tennessee Gov. Bill Haslam tells the crowd of more than 100 people that jobs will be a major focus for veterans transitioning to the workforce after graduating from state colleges and universities March 8 in the Student Union Ballroom on the MTSU campus.

Dr. Hilary Miller, director of the Charlie and Hazel Daniels Veterans and Military Family Center, visits with attendees at the March 8 Statewide Veteran Education Academy at MTSU in the Student Union Ballroom.

Commissioner Many-Bears Grinder of the Tennessee Department of Veterans Services speaks during the 2017 Veterans Education Academy March 8 at MTSU.