‘MTSU On the Record’ wrestles .. 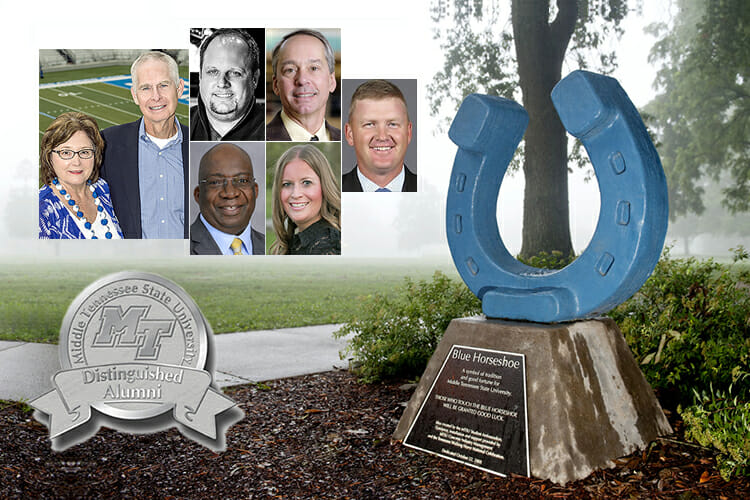 From 1960 to the current day, the MTSU Alumni Association has recognized accomplished alumni with the association’s highest honor: the Distinguished Alumni Award.

This year’s recipient is Nic Dugger of Nashville, Tennessee, who has enjoyed an extensive career in the broadcasting field since he was 12 years old.

This year’s Young Alumni Achievement Award, given to a graduate age 35 or younger making a positive impact in the world, goes to Casey Pash of Columbia, South Carolina, who has consistently embodied leadership and service from her time as a student to present day.

For the fifth consecutive year, True Blue Citations of Distinction are being awarded. Categories and this year’s honorees include:

• Achievement in Education (MTSU faculty) — Frank Michello of Murfreesboro, who has exceled at teaching, research and service in a 30-plus year career at MTSU.

• Achievement in Education (non-MTSU) — Mark Hall of Winston-Salem, North Carolina, who is one of the nation’s leading scholars in the areas of health care, public policy and bioethics at the Wake Forest University School of Law.

• Service to the Community —Whit Turnbow of Murfreesboro, former senior associate athletic director and golf coach, who helped create the True Blue Turnbow Project to provide coats for those who need them in cold weather.

The awards will be presented during Homecoming Week at the Distinguished Alumni Awards Reception at 4 p.m. Friday, Oct. 19, in the Sam H. Ingram Building, 2269 Middle Tennessee Blvd.

The public is invited. It is a free event, but organizers request RSVPs to plan for food and space. To register, RSVP to alumni@mtsu.edu.

To find parking at the Ingram Building, visit http://tinyurl.com/MTSUParkingMap for a printable campus map.

Dugger began his television career in Jackson, Tennessee. While an MTSU student, he became the student TV station manager as a freshman. While working on countless mobile production and years of production work with MT10, Dugger also worked as a freelance producer and editor.

After graduation, Dugger worked on milestone projects with the Discovery Channel and National Geographic, such as the first live multicamera production from an active volcano and the first underwater ocean-to-ocean broadcast. In 2004, he founded his company, TNDV, and completed the construction of his first mobile television production truck. His fleet has grown to eight mobile trucks, which have been used for major television events from presidential inaugurations to awards shows, sporting events and other live productions. It is now the largest mobile television production facility provider in the Southeast. National productions can be seen nightly on PBS, CMT, GAC, ABC and other networks.

Along with his membership on the MTSU College of Media and Entertainment Wall of Fame, his status as a 41-time Emmy Award nominee and 12-time recipient, and serving on the Dean’s Board of Trust, Dugger is a regular supporter of the College of Media and Entertainment, including donating equipment, providing his production trucks to MTSU students, speaking to classes and mentoring and hiring students and graduates.

While a student, Pash was a very active Student Ambassador and served as president of her sorority, growing it to one of the largest on campus. She was a member of the Student Ambassador group that developed and dedicated the “blue horseshoe” that’s become a tradition in Walnut Grove.

A position with First Tennessee Bank, where she advanced quickly to become a private client relationship manager, helped her hold several board positions within groups such as Cable, the Nashville Area Junior Chamber of Commerce and the Young Leaders Council.

Pash was chosen to manage the Governor’s Residence for the Haslam family, overseeing all daily operations, residence staff and projects, along with coordinating more than 100 events per year at the residence. While there, she also served MTSU on the national alumni board, and un 2012, she became one of the youngest National Alumni Association presidents. Upon moving to South Carolina, Pash was chosen by then-Gov. Nikki Haley as executive director of The Original Six Foundation, a nonprofit focused on education, quality of life and job readiness initiatives. Pash earned an MBA and now serves as president and CEO of Junior Achievement of Greater South Carolina, providing leadership to 11,000 students and managing 500 volunteers across a 34-county region and receiving a 5 Star Award from Junior Achievement USA.

Michello has deep roots at MTSU. He has excelled at teaching, research and service during a 30-plus year career. He is director of the Master of Science in Finance Program, which he founded and developed. Having taught effectively across the curriculum from undergraduate to graduate courses, both in the classroom and online, he is adept at teaching everything from introductory level instruction to highly technical specialized master’s course work.

Students praise Michello as a great advocate for student success and involvement within the Jones College of Business. He is recognized through his teaching evaluations and through student word of mouth as an instructor who has high expectations of students while being fair and who delivers high-quality educational experiences to all. He places high value in preparing and providing students with a foundation of knowledge that will allow them to succeed in the finance world. His impact on the lives of MTSU students is evident from the many alumni who not only keep in touch, but credit Michello with opening doors to their finance careers.

An MTSU honors graduate, Hall earned a law degree from the University of Chicago. He is director of the Health Law and Policy Program at Wake Forest’s School of Law. The author or editor of 20 books, including “Making Medical Spending Decisions” and “Health Care Law and Ethics,” he is engaged in research in the areas of health care reform, access to care by the uninsured and insurance regulation.

Hall has published scholarship in the law reviews at Berkeley, Chicago, Duke, Michigan, Pennsylvania and Stanford, and his articles have been reprinted in a dozen casebooks and anthologies. He also teaches in the university’s graduate programs for bioethics and its MBA program, and he is on the research faculty at the medical school. Hall regularly consults with government officials, foundations and think tanks about health care public policy issues. He has served on the MTSU Honors Board of Visitors, consistently contributed to an undergraduate fund and returned to campus to discuss health care.

The Boyds’ vision launched in 2016 with a weeklong inaugural event that involved faculty, students, alumni and business leaders. Tom and Martha Boyd Ethical Leadership Week has grown to engage more than 30 community leaders and hundreds of students speaking candidly about ethics challenges in business. From this vision, a student ethics organization has also been formed.

Tom Boyd, a member of the Dean’s Advisory Council in the Jones College of Business, helped convene a panel of alumni to assist the assistant dean for Assessment and Assurance of Learning in the college to evaluate the program’s success. The Tom and Martha Boyd Ethical Leadership Week is seen as a key initiative that helps MTSU prepare students not just with technical knowledge but with integrity and real-world skills.

The Boyds also have served MTSU in several other capacities including: former member of the Foundation board, College of Business Advisory Board, speaker at the Executive in Residence program, Walnut Grove Society members, BRAA members and season ticket holders for football and men’s and women’s basketball for many years. In 2011, he was honored with the Jones College Exemplar Award, which is presented to a Jones College alumnus whose personal and professional accomplishments demonstrate that future MTSU graduates can also achieve at a high level.

Service to the Community — Whit Turnbow (Class of 2000), College of Education and College of Behavioral and Health Sciences

After seeing a young man waiting at a bus stop in 9-degree weather without a jacket, Turnbow tweeted, asking if anyone knew someone who needed a coat. From there, the “True Blue Turnbow Project” was born. Calls and donations came pouring in, and from there, Turnbow partnered with the Murfreesboro City, Rutherford County and Bedford County schools as well as MTSU’s Murphy Center to collect and distribute warm coats to children. He turned a simple social media post into an annual coat drive, keeping thousands warm during the winter months and so far delivering more than 5,000 coats.

After a battle with cancer, Turnbow is now sharing his personal experiences through messages of faith, love and family. His keynote presentations around the community offer words of hope, strength and growth. One particular engagement was viewed more than 75,000 times. Award nominator Lori Warise wrote, “In my mind, Whit Turnbow is a living representation of the True Blue Pledge!”