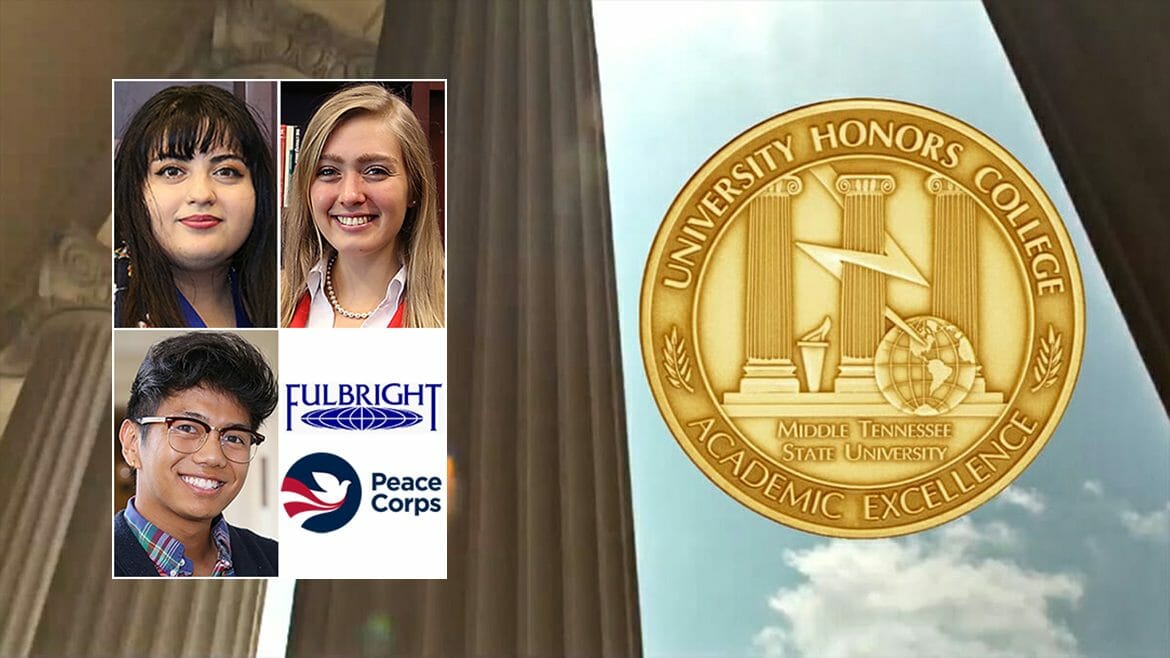 Pel Doski and Leia Green of Nashville, Tennessee, are the latest MTSU students to earn Fulbright Fellowships to teach or conduct research abroad later this year.

A third finalist, Hermon Phuntling of Knoxville, Tennessee, an MTSU senior majoring in in global studies and human geography, also earned a Fulbright to teach in Thailand. He decided, however, to perform health care work with the Peace Corps in the African country of Benin over the next two years.

The U.S. State Department sponsors the Fulbright program to increase mutual understanding between people in the United States and other countries by placing U.S. students in other nations to teach or conduct research for eight to 10 months.

Doski, who was born in Guam after her parents fled persecution in Iraq, will leave this month for South Korea for her 12-month Fulbright teaching assignment. It will begin with six weeks of intensive sessions before Doski is placed with high school or middle school students.

“I was in utter shock,” Doski said of learning about her award, adding she “felt intimidated” by previous recipients from Ivy League schools and those who have majored in Asian studies.

Green, who is an aerial silks dancer and yoga instructor, plans to attend graduate school to teach second language acquisition. She previously visited Latin American schools, which should bolster her preparedness, Vile said.

Phuntling, 22, who graduates in August, was born in India and immigrated to the United States from Burma. After serving in the Peace Corps, he plans to enter the health care field.

At MTSU, Phuntling has been involved for four years with the Student Government Association, serving as a senator and vice president of marketing as a senior.

“I thought I would cast a wide net to see all the possibilities (out there),” he said. “I realized (for now) the Peace Corps would help me more.”

Phuntling leaves for Africa in mid-September. He said he will reapply for a Fulbright research fellowship after his Peace Corps commitment ends.

Led by Clippard, the Undergraduate Fellowship Office in the Honors College assists students in applying for Fulbright and other international awards.

MTSU has been placing more emphasis on study-abroad opportunities, Vile said, in part because the experience often prepares students for future fellowship opportunities.

The Honors College sponsors a Passport Day each year in which students obtain passports to make international travel possible.

“The success of MTSU students has been particularly impressive because the competition has become increasingly competitive and includes many applicants from Ivy League and other private colleges and universities,” said Vile, who also serves on a national Fulbright selection committee.

MTSU has more than 240 combined undergraduate and graduate programs. The Honors College, the first in the state, is one of nine colleges within the university and offers students an Ivy League experience.