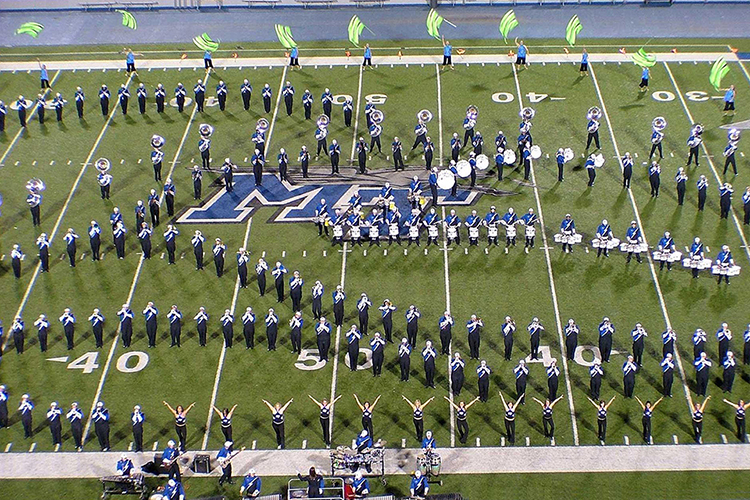 MTSU‘s School of Music has canceled the nation’s longest-running marching band competition to help keep high school competitors and their supporters from across the region safe in the ongoing pandemic.

Interim School of Music Director Jennifer Vannatta-Hall announced that the 2020 Contest of Champions, which  had been planned for October in MTSU’s Floyd Stadium, won’t be held because “the safety of students, families, teachers, directors and staff is paramount.”

“2020 would have been our 58th year for the Contest of Champions, which is America’s longest-running marching band competition,” she said.

“The decision was not made lightly. … The MTSU School of Music looks forward to enthusiastically welcoming you back to campus for next year’s Contest of Champions, where through the gates will pass the best bands in the world.”

Vannatta-Hall’s reference to “the best bands in the world” comes from the banner that welcomes Contest of Champions participants every year as they enter the gates of Floyd Stadium to perform on Jones Field.

MTSU’s late music professor emeritus Joseph T. Smith, longtime leader of the Band of Blue marching band, started the competition in 1962 to encourage high school musicians and to showcase the university for potential students and their families.

Judges evaluate each ensemble on its musical and marching proficiency and the effectiveness of its overall performance, using an Olympic-style process that’s set the standard for marching band competitions across the country.

MTSU’s 350-plus-member Band of Blue, the largest student organization at the university, hosts each Contest of Champions and performs during the event to celebrate with their young musical colleagues.

The 1962 contest welcomed 18 bands from across the state, and up to 50 bands have competed in a single year. 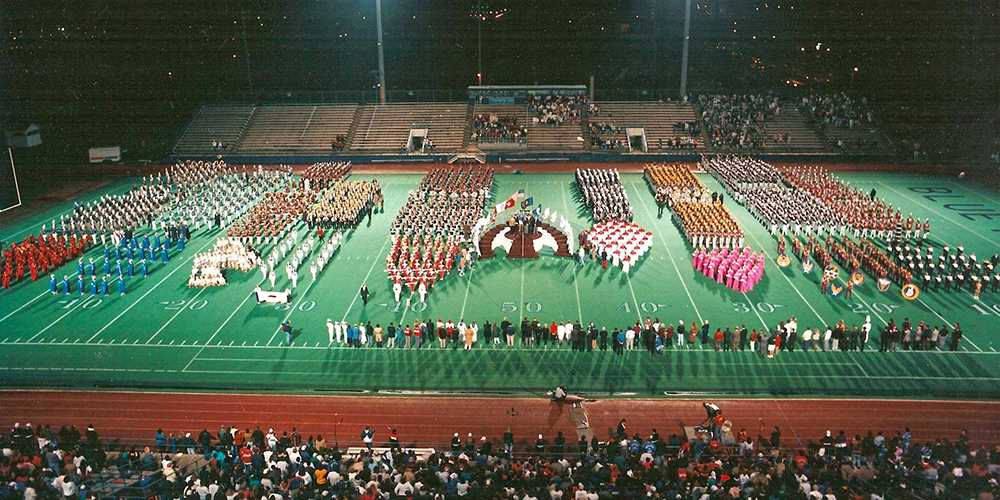 Competing high school marching bands gather on Jones Field at MTSU for the awards ceremony at the annual Contest of Champions in this file photo. The MTSU School of Music has canceled this fall’s Contest of Champions, the nation’s longest-running marching band competition, to help keep high school competitors from across the region, and their supporters, safe in the ongoing pandemic. (MTSU photo courtesy of School of Music)

The 2019 Contest of Champions drew 28 area marching bands to MTSU. Nashville’s McGavock High School earned the grand champion honor as well as the Governor’s Cup, which is awarded to the top Tennessee ensemble. (The McGavock performance is available below.)

MTSU also canceled the 2017 Contest of Champions as a precaution when white supremacists threatened to rally in downtown Murfreesboro. The threat fizzled, and a “Murfreesboro Loves” counterprotest instead drew hundreds of citizens in a peaceful show of support for the community.

Craig Cornish, professor of music and director of athletic bands at MTSU, shared his disappointed acceptance of this year’s cancellation in a social media post, noting that the university has called off all its scheduled major events this fall.

“To current High School Seniors: I am especially sorry you will not get one more CoC performance,” he said.

“We will be back, and the Contest of Champions will be better than ever. Furthermore, please do whatever you can to help mitigate this virus — we can’t have anything normal until things improve.”

MTSU is winding down its summer 2020 semester, which was conducted online, and its Aug. 8 summer commencement will be a virtual ceremony. The fall 2020 semester begins Aug. 24 and will combine online and some on-campus courses. Masks, distancing and other safety measures will be required in all MTSU buildings.

The MTSU Band of Blue performs on Jones Field inside the university’s Floyd Stadium in this recent file photo. The MTSU School of Music has canceled this fall’s Contest of Champions, the nation’s longest-running marching band competition and hosted by the Band of Blue, to help keep high school competitors from across the region, and their supporters, safe in the ongoing pandemic. (MTSU photo courtesy of School of Music)