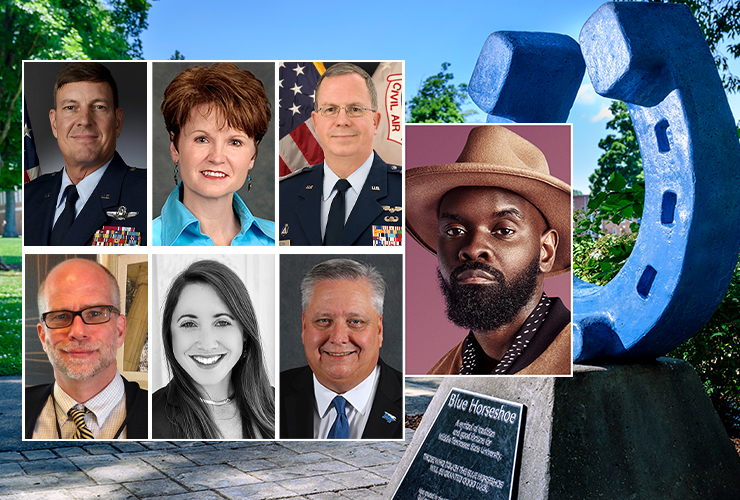 This year’s Young Alumni Achievement Award, given to a graduate age 35 or younger making a positive impact in the world, goes to Gabrielle Thompson (Classes of 2012 and ’15), a Nashville resident and Free for Life International’s executive director and CEO for the past six years — with a heart for empowerment and justice for vulnerable world populations.

For the eighth consecutive year, True Blue Citations of Distinction are being awarded. Categories, including a new one for Military Service, and this year’s honorees include:

• Achievement in Education (MTSU faculty) — Rebecca Foote (Class of 2006), of Murfreesboro, a Jones College of Business faculty member and Master Instructor coordinator in the Department of Accounting.

• Achievement in Education (non-MTSU faculty) — Mitchell Miller (Classes of 1990 and ’91), of Middleburg, Florida, the John A. Delaney Presidential Professor at the University of North Florida, where he also serves as editor of the American Journal of Criminal Justice.

• Service to University — Chip Walters (Class of 1985), of Murfreesboro, the longtime “Voice of the Blue Raiders” in football and men’s basketball and master of ceremonies for various athletic and universitywide functions and volunteer on numerous MTSU boards and committees.

• Service to Community — Col. Barry Melton (Class of 1982), of Cleveland, Tennessee, who has worked since 1986 in numerous capacities with the Civil Air Patrol.

• Military Service — Col. Joel Cook (Classes of 1992 and ’93), of Yorktown, Virginia, who has spent 30 years in the U.S. Air Force as a pilot, vice wing commander and current director/chief at Air Combat Command headquarters in Virginia.

“The Alumni Association is excited to recognize the achievements of seven talented alumni,” said Ginger Freeman, Office of Alumni Relations director. “Their accomplishments show the breadth of success of our graduates and we look forward to honoring and celebrating them as part of this year’s homecoming festivities.”

Regarding the new military award, Freeman said “as an institution that has such a strong history with the military and veterans, it was only natural to add this new award. It is an honor to recognize an alumnus for their military service.”

The Alumni Association will recognize them at several events during MTSU Homecoming in late October.

Torrance Esmond (Class of 2003), College of Media and Entertainment

Esmond has produced for some of music’s biggest names and received Grammy, Dove and Stellar awards. He is innovative, passionate, philanthropic and scholarly. As a young man, Esmond received a scholarship and enrolled at MTSU, studying mass communication and media studies. After attending an Outkast concert, he felt compelled to pursue his love for music.

Esmond continued to perfect his craft and caught the attention of several artists and executives. He yielded his first industry job as vice president at independent record label Reach Records. As its flagship artist Lecrae (Lecrae Moore), a former MTSU student, was kicking down mainstream doors, Esmond had a musical style and a rolodex that functioned as key. While serving as an executive and producer, he and Lecrae won Grammys for Best Gospel Album and Best Contemporary Christian Song.

Esmond returned to the mainstream and started his own imprint, Track Or Die, a production and boutique music publishing company. With credits including Keisha Cole, Yo Gotti, Ludacris, Rick Ross, Meek Mill, Wale, Nipsey Hussle and Tyler Perry Studios, Esmond is a sought-after talent. In 2015, he started the Street Symphony Scholarship for aspiring music business students at MTSU, where the adjunct teaches hip-hop and R&B songwriting.

Gabrielle Thompson (Classes of 2012 and ’15), College of Liberal Arts

Thompson has expanded Free for Life International’s work to seven countries, seen the rescue of 700-plus women and girls, partnered with one Safe Home, developed two prevention and interception curriculums and created one nationally recognized survivor scholarship and mentorship program.

Thompson is board chair for CareCom, board advisory member for Youth Against Trafficking and member of the Tennessee’s Human Trafficking Working Group Steering Committee and two orphan organizations. Thompson was awarded Nashville’s Top Professionals 30 under 30 in 2018 and Nashville Business Journal’s Top 40 under 40 in 2020. She holds a master’s of International Affairs and a bachelor’s in Global Studies from MTSU.

Foote, who received her master’s in accounting/information systems and a faculty member since spring 2006, finds it humbling to have been cited 19 separate semesters as an instructor “who makes a real difference” in students’ lives by MTSU’s Office of Student Affairs, resulting from student input at graduation.

Foote, 2010 MTSU Outstanding Teacher Award winner, earned her certified public accountant license and is a member of the American Institute of CPAs, the Tennessee Society of CPAs and other organizations. A member of the Accounting Advisory Board for Nashville State Community College, Foote is instructor of record for the CPA Exam Review courses.

College of Behavioral and Health Sciences

One of the country’s most heavily funded criminologists, Miller has spearheaded multiple federal- and state-sponsored initiatives to implement drug and mental health treatment programs in incarcerated settings. The author of more than 200 scientific articles and several books, Miller also served as the lead evaluator of the Moscow Police Command College for the U.S. State Department and has been an adviser to two U.S. Attorneys General.

Chip Walters (Class of 1985), College of Media and Entertainment

This year marks the 31st season in the booth for Walters, who inherited play-by-play duties for football and men’s basketball in April 2009. He holds the third-longest tenure for MTSU broadcasters behind only the late Monte Hale and current baseball and women’s basketball broadcaster Dick Palmer (Class of ’60).

Walters’ volunteer service includes 12 years as a board member of the MTSU Alumni Association, helping revamp the alumni awards programs to allow for more graduates to be recognized. The mass communications (broadcast journalism) alumnus is a skilled master of ceremonies at events including Homecoming Parade, Groundhog Day Luncheon, the Raiders’ Choice Awards and Blue Raider Hall of Fame induction ceremony, and many others across campus.

Col. Barry Melton (Class of 1982), College of Media and Entertainment

Melton, who earned his bachelor’s from MTSU in recording industry, is dean of on-site education for Volunteer University, a new Civil Air Patrol senior member professional development program. He has classroom instruction experience at universities in Southeast Tennessee and North Georgia.

From 2015-19, Melton was CAP Southeast region commander, responsible for 9,000 members in six wings, including Puerto Rico and the U.S. Virgin Islands. He holds master or senior ratings in five CAP specialties, earned numerous CAP awards and decorations and is director of virtual tour development for Life Care Centers of America Inc.

Cook has flown more than 150 combat missions in support of Operations Southern Watch and Enduring Freedom. As a command pilot, he has flown more than 3,500 hours in four aircraft. His 17 assignments from 1993 to present have taken him to Japan, Greece, Alaska, various southern states and Hawaii. His 13 major awards and decorations include Legion of Merit and Defense Meritorious Medal.

Cook leads a selectively manned division responsible for cradle-to-grave management of all Combat Air Forces special access programs and directs incorporation of  advanced technologies in developing requirements for future combat aircraft and weapons. He graduated with bachelor’s and master’s degrees in aerospace.