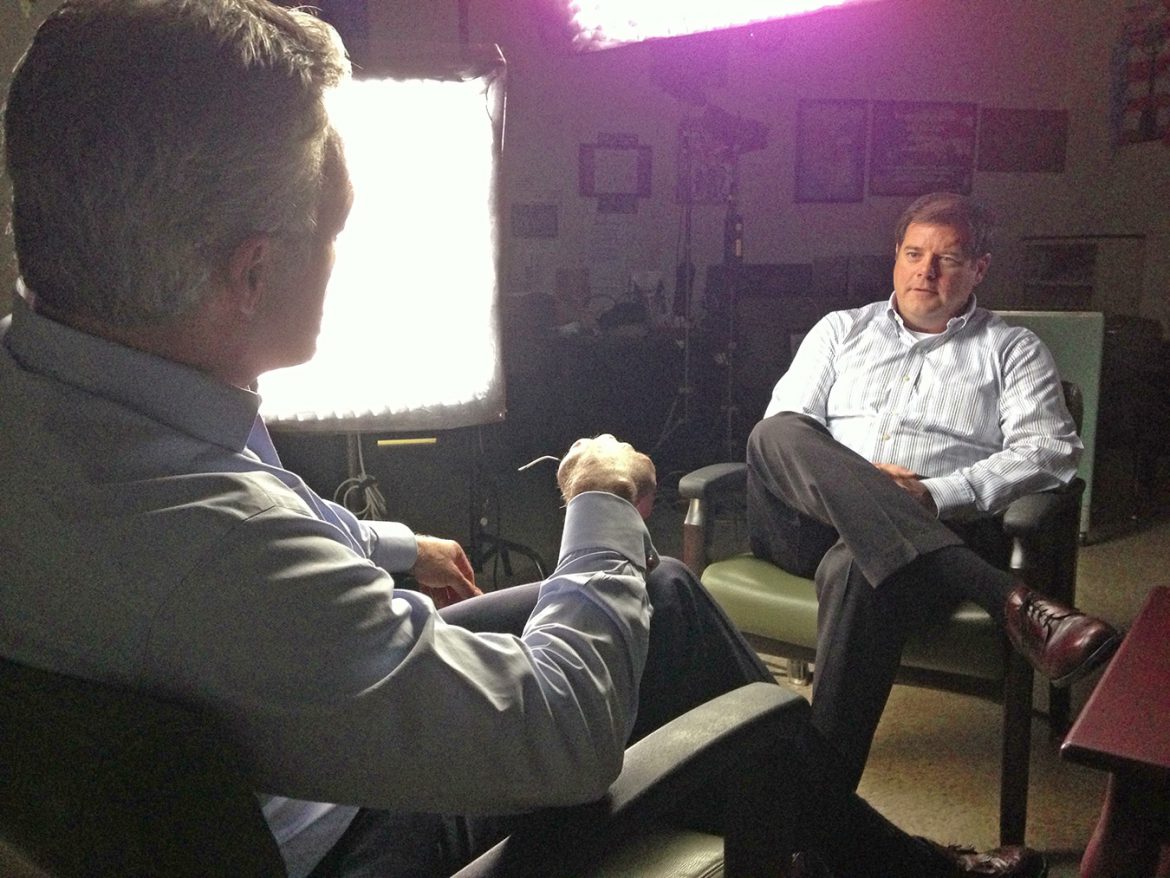 The efforts of an MTSU alumnus to help veterans struggling with the aftermath of combat have been highlighted by one of the nation’s top television newsmagazine programs.

Reeder, 47, a former Murfreesboro resident who earned his master’s degree from the MTSU College of Behavioral and Health Sciences, and the North Little Rock VA have quite a success story to tell about the post-traumatic stress disorder treatment program Reeder runs.

Veteran reporter Scott Pelley posed thorough and well-informed questions, and the network broadcast the story of the innovative methods the VA reports are helping three out of four patients.

To view video of CBS’ coverage and part of Pelley’s interview with Reeder, visit http://www.cbsnews.com/news/the-war-within-treating-ptsd/.

Pelley asked Reeder, who is a clinical psychologist, what he says when a new veteran patient comes in and says, “Doc, can you fix me?”

“You are the most important and powerful piece of equipment in your own recovery,” Reeder said in response. “And we’re going to get that back into shape, because that’s going to be the most enduring asset you have, not what happens here but what you do with it. ”

The segment, titled “The War Within,” brought attention to the veterans’ plight, especially those facing post-traumatic stress disorder or PTSD.

One in five veterans of the Iraq and Afghanistan wars — nearly 300,000 vets — have been diagnosed with the anxiety disorder, “Face the Facts USA,” a George Washington University project, reported in 2013. Its study showed health care costs were 3.5 times more for vets with PTSD than for those without the disorder. Per vet, treatment costs about $8,300 in the first year. Suicide rates average nearly one per day, and veterans account for 20 percent of all U.S. suicides.

Prolonged exposure and other therapies used to treat victims of sexual assault and rape are helping ease the symptoms of war veterans with PTSD.

“The symptoms,” Reeder tells Pelley in explaining the similarities between PTSD therapy and that for victims of sexual assault and rape. “The avoidance, the isolation, the hyper vigilance, extreme anxiety, irritability, inability to sleep, nightmares. Same thing. Different sources, but same thing.”

“We provide a very intense, very structured program,” Reeder said, adding that patients come from across the Southeast, Oklahoma and other regional locales.

“Relationships our staff are able to develop with these veterans are positive and meaningful,” Reeder said. “Our staff is world-class. Veterans say the staff acted and treated them like they cared about them.”

The Nashville native and longtime Murfreesboro resident called it “a very powerful piece. It was good for people to see there’s help out there.” Reeder said he was very happy with the way the story turned out, and the public reaction he has received has been very positive.

“A big focus was how hard veterans worked at getting their lives back,” he said.

While serving in Operation Desert Storm, Kevin Reeder showed his allegiance to MTSU. He later earned his master’s degree in psychology from MTSU’s College of Behavioral and Health Sciences. (Submitted photo)

A true story about Reeder, whose late parents, Glen and Ernestine N. Reeder, served on the MTSU faculty: He and two “very good friends” of his, Alton Rooker and current MTSU history professor Derek Frisby, dropped out of MTSU midsemester to join the military and serve during Operation Desert Storm. They all served in the same reserve unit when it was deployed to Saudi Arabia.

One of Reeder’s military recollections was when former (and the late) Gen. Norman Schwarzkopf Jr. “would drive through the gates several times a week” as Reeder and others provided security for military leaders.

A second video showing veteran Eric Collins being counseled by Reeder and later interviewed by Pelley can be found at http://www.cbsnews.com/news/ptsd-victims-progressing-with-innnovative-therapy/. Collins was one of 28 men “60 Minutes” taped while undergoing individual and group.

Reeder lives in Little Rock with his wife, Inez, and 10-year-old stepdaughter, Dennis.

Kevin Reeder’s father, Glen Reeder, served on the faculty in the Department of Health and Human Performance. The department annually awards the Glen Reeder Scholarship to a deserving student.