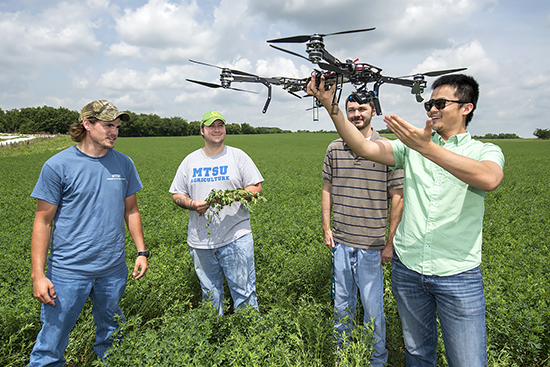 A $714,000 U.S. Department of Agriculture grant to MTSU for collaborative research with two Texas universities will support a partnership to discover novel ways of land management and solve important ecological problems in changing climates and agricultural management.

The three-year joint venture between MTSU, Texas A&M and Sam Houston State University is the largest USDA grant the MTSU School of Agribusiness and Agriscience has ever received and the largest of 12 national competitive awards totaling $4 million announced by the USDA in February.

The MTSU award is for precision agriculture, agroecological education and research.

MTSU will oversee the overall research and educational components of the multidisciplinary project and coordinate with the other partner institutions, said project leader Dr. Song Cui, an assistant professor in the school.

“We will be setting up a very strong agroecological research site here in Middle Tennessee,” he added. “Texas A&M will provide strong research and contribution on the ecological modeling component of the project. Sam Houston will focus on agroecological education and leadership building for agricultural students.”

Calling it a milestone for the School of Agribusiness and Agriscience, interim director Jessica Gentry Carter said the $714,023 award “provides a great opportunity for us to build on this partnership and improve research opportunities for our students.”

About 260 from the three universities will be involved, including 100 MTSU students. Twenty will be in research-based summer internships, and the other 240 will enroll in and complete agriculture courses that have been revamped because of this project.

Twelve courses will be modified at MTSU, Texas A&M and Sam Houston.

Four are graduate courses: two at MTSU that will be taught by Dr. Qiang Wu, an associate professor of mathematical sciences; and one at each of the other schools.

Nine undergraduate courses — three taught by Cui at MTSU and four at Sam Houston and one at Texas A&M — also await students.

The award became a reality because of MTSU’s Non-Land Grant College of Agriculture designation and “the combined strength in agriculture, aerospace, math and our strong partners,” Cui said, adding that the grant competition will strengthen agricultural research and education programs.

Dr. Jackie Eller, interim vice provost for research and dean of the College of Graduate Studies, said MTSU now has received more than $1 million from the USDA.

“This success is a result of MTSU’s collaborative spirit and its strength in agriculture, aerospace and mathematics,” Eller said.

Cui and MTSU earned a $300,000 USDA grant in 2015 to support precision agriculture research and education in partnership with the University of Tennessee-Martin.

“This successful effort is a compliment to the growing reputation MTSU has as institution where scientific innovation is nurtured and rewarded,” Gill said.

“MTSU is beginning to attract scientists of Song Cui’s caliber and continues to enhance the educational experience of MTSU students, particularly those ‘best and brightest’ who become interested and involved in the cutting-edge work this grant award supports.”

Advances in unmanned aircraft systems vehicles, commonly called drones, along with machine learning and modeling in computer science. will be incorporated into students’ undergraduate and graduate courses.

MTSU has been working to secure a certificate of authorization from the Federal Aviation Administration to operate unmanned aircraft at the MTSU Experimental Learning and Research Center, also known as the MTSU farm and dairy, located in Lascassas, Tennessee, about six miles from the university’s main campus.

This is the first comprehensive research project that has been conducted combining these techniques on a regional scale, said Todd Gary, special assistant to the MTSU vice provost for research.