My office is located in the Tom Jackson Building, one of MTSU’s original four buildings when it opened 100 years ago in 1911. Right outside the front door is the Veterans Memorial plaza. It is one of the things I personally love most about MTSU. 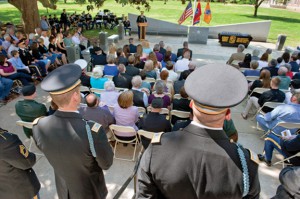 In 2002, two MTSU alums, Pierre Piche (’00) and Ken Ballard (’02), died in overseas conflicts. Two MTSU political science professors, Dr. Andrei Korobov and Dr. Robb McDaniel, were inspired to action. Along with military science professor and war veteran Dr. Derek Frisby (’94), the group approached MTSU’s development office about seeking funding for a memorial. What started out as a vision for a monument snowballed into a plan for a plaza.

With roughly two-thirds of the needed $100,000 raised entirely through private support, MTSU’s development office got a phone call from MTSU alum John Harris (’74), a retired Army officer and Florida-based businessman. He said he’d cover the remaining cost of the project to get it done. Harris’s inspiration? “I think it’s so important for there to be a spot on campus where students can be reminded of the sacrifice people in the service make that ultimately allows them the privilege of being a student at a place like Middle Tennessee.” 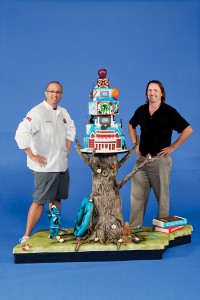 Both big and small gifts from alumni are what make MTSU great. Featured on page 27 is a cake designed by Murfreesboro celebrity cake designer and MTSU graduate Jay Qualls. Qualls and his staff donated the cake out of his deep appreciation for his alma mater, which he credits for all his wild successes in life.

Qualls, a recent cast member on the TLC cable television hit The Next Great Baker, recently launched a new fondant product that is sure to shake up the cake-making world in a big way. (Qualls is a graduate of the Jennings A. Jones School of Business at MTSU, so he knows a thing or two about entrepreneurship.) The cake, which kicks off “100 Things We Love About MTSU,” is currently on display in Walker Library on the MTSU campus.

What says birthday more than cake and gifts? As such, let this Centennialthemed edition of MTSU Magazine serve as a part of the kickoff to MTSU’s Centennial year, which officially begins next month on Sept. 11. All together now: “Happy Birthday to MTSU . . .”  MTSU