Dr. Charles Perry invents a way to make every car a hybrid 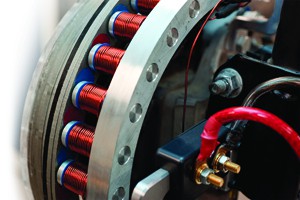 The hybrid retrofit kit is installed in the space between the brake mechanism and the hub.

Perry (B.S. ’66 and M.S. ’69) is the holder of the Robert E. and Georgianna West Russel Chair of Manufacturing Excellence in the Department of Engineering Technology.  He is spearheading and eight-member team collaborating on this patent-pending, wheel-hub motor project.

Perry says that 80% of U.S. drivers make daily trips of 30 miles or less driving 40 mph or less.  Those trips can be made with his 10- to 15-horsepower electric motors that would be powered by extra batteries installed in the car’s trunk. (The hybrid retrofit kit is installed in the space between the brake mechanism and the hub.)

Perry, a former IBM electrical engineer who was awarded 40 patents during his career there, says he believes the kits could be developed into a product selling for between $3,000 and $5,000.