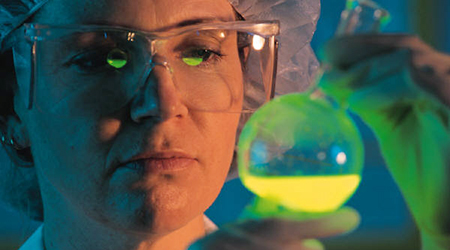 The MTSU Women in STEM Center is using a $10,000 grant from the American Association of University Women Foundation to eventually expose at least 1,000 Southern girls to career possibilities in the fields of science, technology, engineering and math.

The AAUW Foundation awarded the 2012-13 Community Action Grant last year, with some of the funds used for upcoming events at MTSU, including the Feb. 6-8 Girls Raised in Tennessee Science — or GRITS — Collaborative Project Annual Conference.

Expanding Your Horizons, or EYH, conferences are held at MTSU, in Memphis and other Tennessee cities and across the South and the rest of the nation. They encourage girls and young women to pursue STEM careers.

“The grant will allow us to be able to share with others the success we’ve had” with the Expanding Your Horizon conferences, said Dr. Judith Iriarte-Gross, an MTSU chemistry professor and director of the MTSU WISTEM Center.

“It’s important because we see girls who came to campus as fifth graders through our EYH now studying STEM in college.”

The Feb. 6-8 GRITS conference, which will be held in the Tom H. Jackson Building on campus, has a theme of “Building STEM Capacity for Girls in the South.”

It is open to individuals and groups with a strong interest in promoting STEM to girls. To register, visit http://tinyurl.com/MTGRITS2013.

“We recognize the need to raise awareness of STEM careers and to change the stereotypes about STEM jobs for women,” Iriarte-Gross said, adding that girls in middle and high school are “a large untapped source of STEM majors”

“We propose to build STEM capacity for girls in grades five to 12 by creating an EYH Consortium throughout the South,” she continued. “Through EYH, girls are empowered to become the STEM professionals of the 21st century.”

In the first year of the Expanding Your Horizons consortium, Iriarte-Gross said, organizers plan to provide professional development on best practices and lessons learned from AAUW research and from the EYH Network. There also will be workshop leader training with strategies on fundraising and increasing minority participation for both girls and workshop leaders.

“New EYH conferences will be offered in the second year with support from the EYH Consortium,” Iriarte-Gross added. “The target audience will be education institutions and/or community groups who want to provide STEM opportunities for girls, as well as girls in grades five to 12 who want to attend EYH.”

Iriarte-Gross said organizers want to establish new EYH sites and give move than 1,000 girls in the South the opportunity to explore STEM.

“The mission of our project is relevant to the AAUW mission because EYH is breaking down barriers and advancing gender equity for girls and women in STEM education and STEM careers,” she said of the grant provider.

Gloria Blackwell, director of fellowships, grants and international programs for the American Association of University Women, said the Community Action Grants “empower recipients to be leaders in their communities and in the lives of women and girls through innovative ideas and programs.”

“AAUW understands the power of local community impact to break through barriers for women and girls,” Blackwell continued, “and we put our money toward initiatives that align with our mission to advance equality for women and girls.”

Iriarte-Gross said one of the association’s early grant recipients was Marie Curie, the Polish-born physicist and chemist who worked primarily in France and became famous for her pioneering radioactivity research.