Two members of the MTSU community have survived COVID-19 to return to a somewhat normal life in the midst of a worldwide pandemic.

Dr. Jeremy Aber, an associate professor of geosciences, first felt the symptoms March 12. By the next day, Friday the 13th, he was very ill.

“I had the dry cough, body aches, fever and fatigue,” Aber said. “It was pretty miserable, but I never got to the point where I was having trouble breathing. I was just exhausted and had little appetite. I was craving water, which is definitely not a normal day-to-day experience for me.” 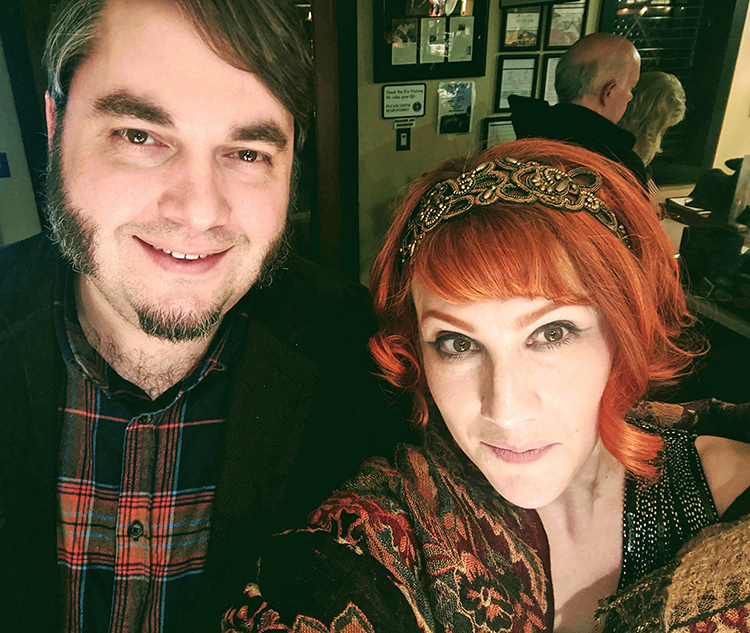 Jeremy Aber, an associate professor of geosciences, and Amy Harris-Aber, a doctoral candidate majoring in English, on Valentine’s Day 2020, before they became ill due to COVID-19. (Photo submitted).

Amy Harris-Aber, a doctoral candidate in English, has been married to Jeremy for nearly 13 years. She said she knew he was terribly ill when he did not fight her suggestion to go to the doctor.

“He hates the doctor, and so I knew that the illness he was experiencing must be causing him lots of pain,” Harris-Aber said. “I couldn’t even touch him without it causing discomfort.”

Aber’s doctor gave him the antiviral drug Xofluza. By March 19, he felt what he called “close to normal.”

He said, however, that he can’t be certain whether the influenza drug helped him. He said he just tends to be sick less often and for shorter periods of time than his wife.

Her anxiety level was higher because in 2015 she had suffered through Guillain-Barre syndrome, an illness in which the body’s immune system attacks the body’s nerves. Her doctor also prescribed Xofluza, but the drug did not bring her fever down.

After receiving a screenshot of a Facebook post for an area clinic, Harris-Aber called to find out if her preexisting condition would qualify her for a COVID-19 test.

A physician’s assistant, dressed in full protective equipment, went to the couple’s home and administered the test.

“The swab they use for the test does have to go way back into your nasal cavity, and then they immediately place the swab in a protective bag with a cooling pack to preserve the test,” Harris-Aber said. “She shipped the test off that night, and I had my results by Friday of the following week.”

The Abers are among thousands of Tennesseans who’ve suffered through COVID-19 so far. On April 14, the Tennessee Department of Health reported 5,823 confirmed cases statewide, including 124 deaths.

Since Aber was sick mostly during the second week of MTSU’s extended spring break, he didn’t experience much of a break in his teaching routine during the switch to remote classes.

Harris-Aber managed to send off the final revised chapter of her dissertation to her adviser April 6. The couple caught up on their reading, played video games and watched television and movies to fend off cabin fever.

“Since we had the official diagnosis, even if we wanted to go out in a safe manner, like for a walk without other people, we couldn’t,” Aber said. “It was definitely stressful, but we got through it. The cats helped. They are definitely loving the fact that we’re around the house all the time.”

“I believe that love, at least the love in my life, is often not glamorous, but pragmatic,” Harris-Aber said. “It’s dragging your partner to urgent care or making sure to wake them up every six hours to take Tylenol in order to reduce their fever. That’s what we did. We pragmatically, systematically supported each other’s physical needs.”

“The fact that we didn’t have to worry about losing our income is a big factor, too,” Aber added. “If this had happened and we lost our jobs or got furloughed in the slowdown, it would be much harder. I really feel for people right now.”

The university switched to remote courses on March 23 and recently announced that remote learning will continue through summer classes. MTSU has also reduced on-campus staffing to only essential personnel.

Updates on the campus response to the pandemic can be found at www.mtsu.edu/coronavirus.