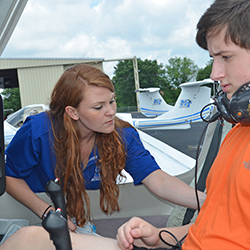 The deadline is nearing for students in grades eight through 12 to be registered for the MTSU Introduction to Aviation and Professional Pilot Advanced Camps.

Registration must be in or postmarked by Friday, May 15, said camp Director Wendy Beckman, a Department of Aerospace professor. To access the camp registration form, visit www.mtsu.edu/aerospace.

The camps will be held June 1-5 for the introduction camp at both the Jean A. Jack Flight Education Center at Murfreesboro Airport and in the Business and Aerospace Building on campus and June 15-17 for the advanced camp at the airport.

The introductory camp introduces rising eighth- through 12th-graders to all aspects of aviation in the introduction to aviation camp and an opportunity of three days of flight-oriented instruction in the professional pilot advanced camp.

“The introduction to aviation camp exposes young people to possible career paths in aviation,” Beckman said. “While we have a great time, it is an educational camp. We are doing lots of educational, hands-on activities.”

The intro class culminates in a flight on one of the university’s Diamond DA-40 glass cockpit aircraft, the same planes used in the advanced camp.

For more information, call the aerospace department at 615-898-2788 or email Mary Lou Cornett at Marylou.Cornett@mtsu.edu or Beckman at Wendy.Beckman@mtsu.edu.