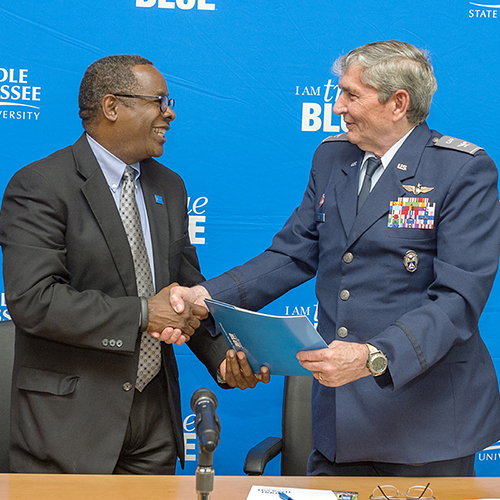 The agreement, signed by MTSU President Sidney A. McPhee and Tennessee Wing commander Col. Bill Lane of Gray, puts into play the educational resources of the university’s Department of Aerospace and College of Basic and Applied Sciences to engage cadets in science and technology pursuits.

“MTSU’s leadership in aerospace education and its state-of-the-art training facilities will help us to develop unique and compelling opportunities for our cadets,” Lane said. “This partnership has great potential for both of our organizations.”

Aerospace education is one of the primary missions of the CAP, a 61,000-member volunteer civilian organization founded in 1941 and chartered by Congress to support the Air Force. In addition to its cadet program for ages 12 to 19, CAP is known for its emergency services, which includes 90 percent of the nation’s inland search and rescue missions each year.

More than 1,000 volunteers are part of the CAP’s Tennessee Wing, which is headquartered in Alcoa, with squadrons in cities across the state.

“We hope this partnership will allow high school students across Tennessee to learn more about the tremendous resources and superb faculty in our world-class aerospace department,” McPhee said. “And we hope many of these students will pursue their interests on our campus.”

Lt. Col. Gary Stanley, commander of the Murfreesboro Composite Squadron, called his group “a family unit, both as cadets and seniors,” with their goals being “respectability, reliability and responsibility.”

Established in 1942, the Department of Aerospace is a signature department at MTSU and has grown into one of the most respected programs in the nation. Fourteen full-time faculty members, 35 flight instructors and more than 750 majors place it among the largest of the nation’s collegiate aviation programs.

Wednesday’s agreement renewed MTSU’s ties with the CAP that stretch back to July 1948, when the CAP’s Middle Tennessee State College Squadron was organized. The squadron, based at the old College Airport, was made up of pilots trained on campus and was recognized for its search-and-rescue work. It operated on campus until 1953.

The Middle Tennessee State College Squadron of the Civil Air Patrol was organized in July 1948, under the supervision of Maj. Elmour Meriwether, Commanding Officer, and Capt. Miller Lanier, Executive Officer. Approximately 75 percent of the members of the Squadron were pilots trained at the College Airport. The organization received statewide recognition for training maneuvers they carried out, especially in search and rescue missions and patrolling and locating forest fires. A well-equipped ground school provided opportunity for instruction in other areas of the CAP work, such as communications, first aid, cadet training and supply. (Photo from 1952 Midlander)

“We were particularly impressed by the air traffic control simulator,” Lane said. “We feel it could offer cadets in Tennessee, and elsewhere in the nation, a singular opportunity to gain first-hand exposure to careers in this part of the aerospace industry.”

“There is a great array of programs already available to these students,” McPhee said. “And we look forward to working with the Tennessee Wing in developing other collaborations.”

Terry Logan, coordinator of safety in MTSU Construction Administration and Environmental Health and Safety Services and longtime CAP senior member, was promoted from captain to major in a brief pinning ceremony after the signing.