OSHKOSH, Wis. — Middle Tennessee State University’s world-renowned Department of Aerospace has set up base at EAA AirVenture, a massive weeklong celebration of aviation expected to attract more than 500,000 visitors from 80 countries.

The annual signature event of the Experimental Aircraft Association, this is the annual convention and fly-in for the 200,000-plus member aviation organization. AirVenture, celebrating its 50th year in this east-central Wisconsin city, is billed by EAA as the “world’s greatest aviation celebration.”

“Our Recording Industry program is found at the biggest events of its industry, like the Grammys and Bonnaroo, so it is right and very much appropriate that our top-tier aerospace program make its presence known at EAA AirVenture,” said MTSU President Sidney A. McPhee. 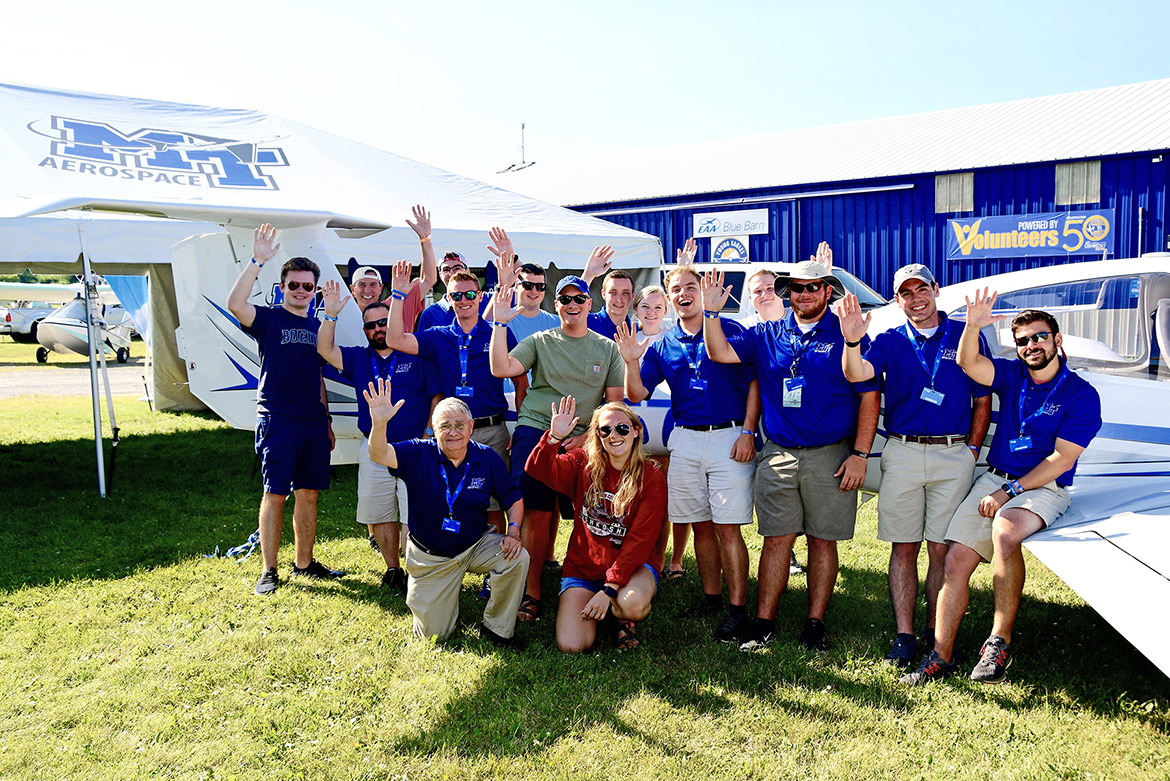 Students, alumni and flight instructors from MTSU’s Department of Aerospace gather around a Diamond DA40 aircraft that the university flew to Oshkosh, Wis., for EAA AirVenture. (MTSU photo by Andrew Oppmann)

A team of about 10 students, recent graduates and flight instructors planted True Blue flags and a giant tent with the Aerospace logo in a corner of the AirVenture grounds. Parked in front of the tent is one of MTSU’s recently refurbished Diamond DA40 training aircraft that students flew to Wisconsin for the event.

Aerospace alumni from across the country, many working for the nation’s top airlines and aviation companies, have stopped by the MTSU tent, as well as several prospective students. Aerospace will host an alumni event here on the AirVenture grounds Wednesday night.

“This is the world’s largest aviation event and we’re thrilled to showcase what MTSU has to offer prospective students and all aviation enthusiasts,” said Bud Fischer, dean of the College of Basic and Applied Sciences that houses the Aerospace Department.

“It’s also a perfect opportunity for our students to network with just about anybody you’d want to meet in the aviation industry,” Fischer said, “as well as connect with other alumni about their experience in our program and what they are doing now.” 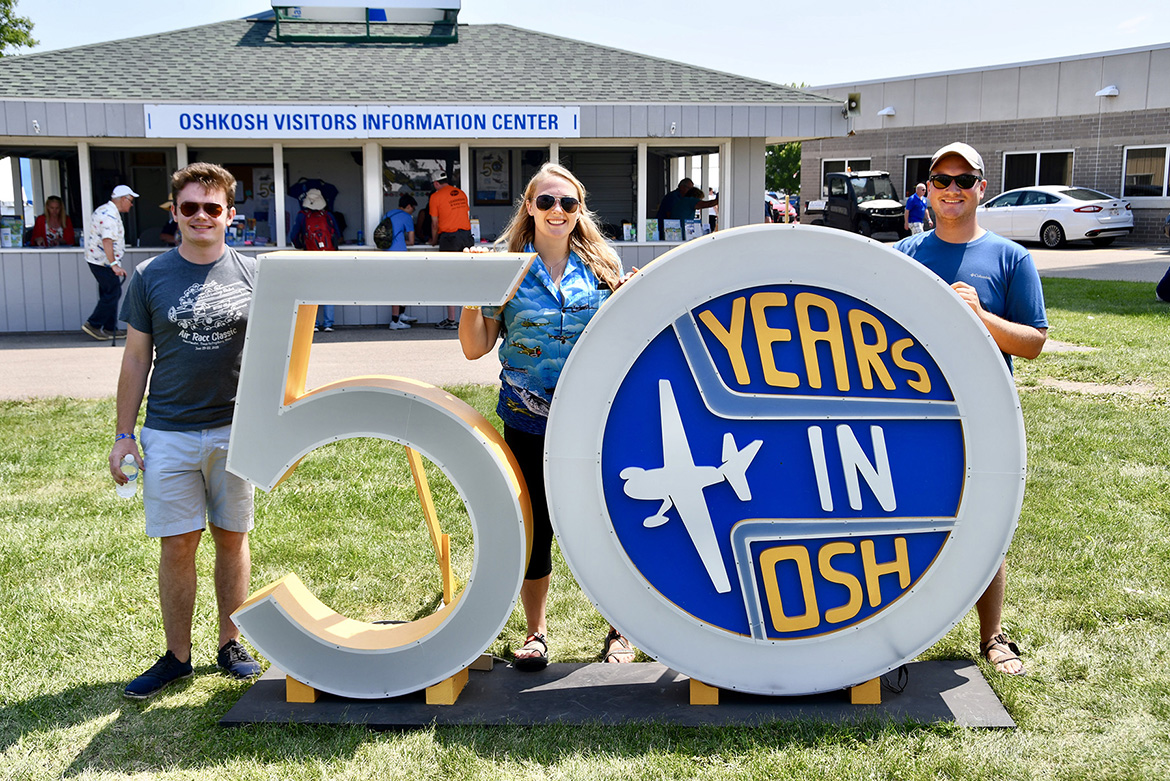 MTSU’s Jackson Dalton, left, Elizabeth Keller and Charles Greenfield pose in front of a sculpture celebrating the 50th year that the EAA AirVenture event has been staged in Oshkosh, Wis. (MTSU photo by Andrew Oppmann)

Wittman Regional Airport at EAA AirVenture becomes the world’s busiest airport during this event, as more than 10,000 aircraft will be coming and going until the event ends Sunday.

“Today has been awesome,” said Michael Clifford, a recent MTSU aerospace graduate from Lebanon, Tennessee. “I feel like a kid in a candy store.”

That sentiment was echoed by Elizabeth Keller, also a recent MTSU graduate from Maryville, Tennessee. “There aren’t words for how happy I am in Oshkosh,” she said.

“It is Disneyland for every pilot — the happiest place on earth,” Keller added.

“The aerospace department is always thrilled to be part of the world’s largest general aviation event,” Beckman said. “It provides a terrific venue for us to reconnect with alumni, view the latest technology, and visit with prospective students.”

Established in 1942, the MTSU Department of Aerospace is a signature department at the university and has grown into one of the most respected aerospace programs in the nation.

Fifteen full-time faculty members, 75 flight instructors, and over 1,000 majors place it among the largest of the nation’s collegiate aviation programs. Students from 32 states and 16 foreign countries have been drawn to study aerospace at MTSU.

MTSU was one of only eight universities selected last year for the launch of the Delta Propel program, a fast-track program for qualified aerospace students to become Delta pilots. 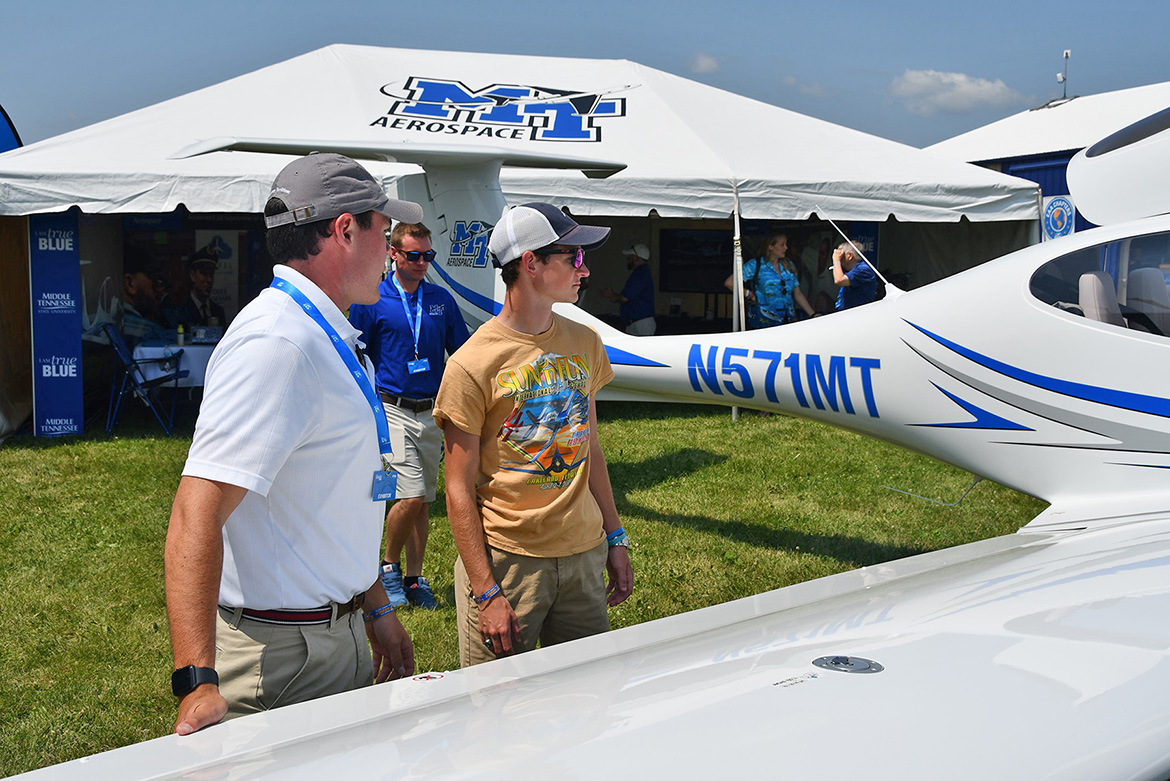 Ryan Hollinsworth, left, an MTSU flight instructor, shows one of the university’s Diamond DA40 training aircraft to John Hitch of Crossville, Tenn., who will be attending MTSU in the fall and majoring in aerospace. (MTSU photo by Andrew Oppmann) 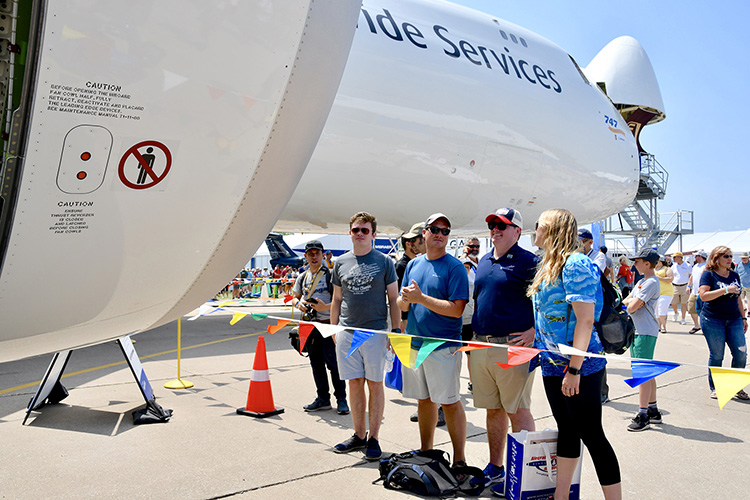