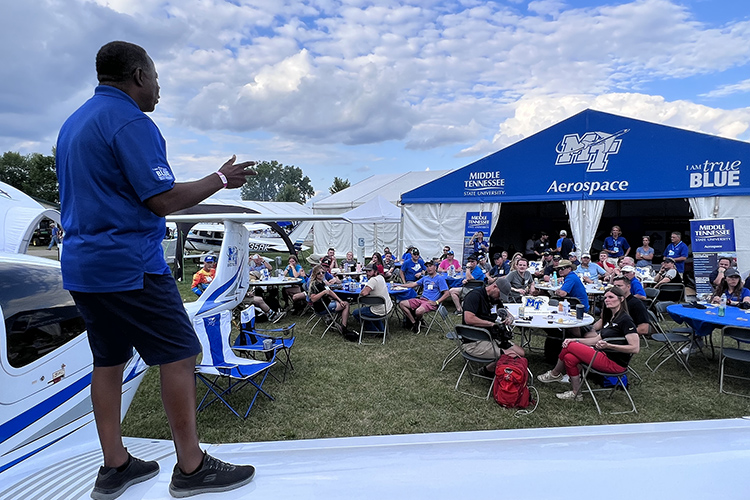 OSHKOSH, Wis. — Middle Tennessee State University’s Department of Aerospace welcomed more than 100 alumni and supporters at EAA AirVenture in Wisconsin who came to learn more about the program’s plans to build a new $62-million flight training campus to accommodate its growth.

EAA, based in Oshkosh, Wisconsin, is the world’s largest gathering of aviation enthusiasts. The massive annual weeklong event attracts more that 10,000 aircraft and drew more than 600,000 visitors last year.

McPhee and the university delegation reconnected with alumni Wednesday, July 27, during a barbecue reception at MTSU’s large tent behind the EAA Control Tower that also features one of the Department of Aerospace’s DA-40 Diamond training aircraft.

“I want you to know that we’ll continue to make you proud,” McPhee told the crowd, which included longtime aerospace supporter and alumnus Donald McDonald. “And I want you to carry the True Blue flag and always remain True Blue for your university, MTSU.”

Watch a brief video recap from the event:

Tennessee Gov. Bill Lee and the Tennessee General Assembly earlier this year approved the allocation of $62 million to MTSU for a state-of-the-art facility to accommodate the aerospace program’s current and expected growth.

“Our strong and visible presence at the world’s largest aviation event sends a loud and clear message to our alumni, supporters and prospective students,” said Byrnes. “We are a presence at Oshkosh.”

McPhee also connected with Brig. Gen. Regena Aye, vice commander of the Civil Air Patrol, the volunteer civilian auxiliary of the U.S. Air Force and a partner with MTSU aerospace since 2014.

MTSU’s team arrived Sunday and will remain in Oshkosh through the weekend.