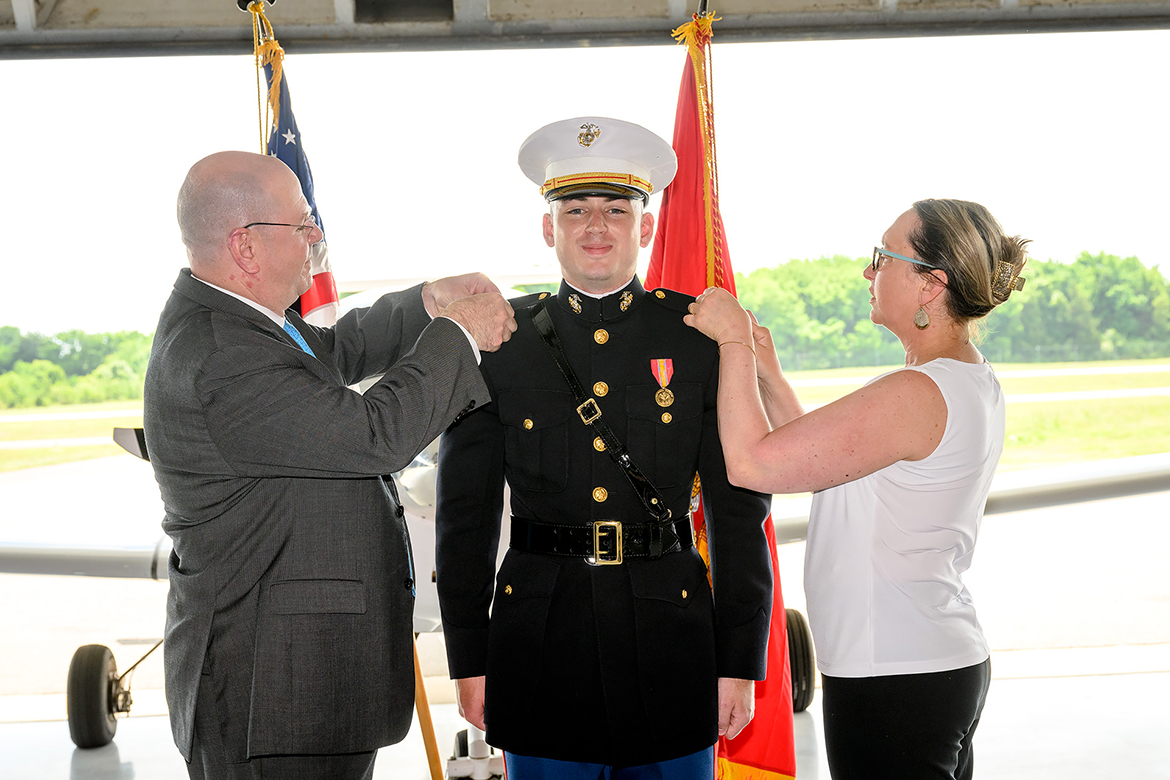 One of the newest members of the U.S. Marine Corps has a proud family history in this military branch.

Commissioning ceremonies are a tradition for students in Platoon Leaders Class (the Marines version of ROTC), as they transition from the university to being a member of the military and serving their country.

An Aerospace professional pilot major and certified flight instructor, Wehner will report to Quantico, Virginia, for six months of basic school. As a pilot, he will eventually transition to the Naval Air Station at Pensacola, Florida, for flight training.

Wehner becomes the sixth family member and third generation to join the Marines. His father, John Wehner, an MTSU alumnus (Class of 1985) with a degree in business administration, retired as a lieutenant colonel. Older brother Sam Wehner commissioned into the Marine Corps in May 2021.

The late Robert J. Wehner retired as a master sergeant with the Marines. He was part of the security team at Camp David in Maryland in the late 1950s and early ’60s, during the final two years of President Dwight Eisenhower’s administration and the first two years of John F. Kennedy’s presidency.

Suzanne Wehner, Isaac’s mother, is a former lieutenant commander in the Navy Nurse Corps and a former MTSU student.

Suzanne and John Wehner presided over the May 20 ceremony, with family, friends and various MTSU faculty and administrators attending.

“It’s my grandfather’s birthday,” Isaac Wehner said, reflecting on what the day meant to him. “He passed away when I was really young. Both my brother and I from a very young age decided we were going to go into the Marine Corps.”

Four years ago at a Marine recruiting office, Wehner determined that he would commission on May 20 since it was both his grandfather’s birth date and the date he passed away at age 80, “so it really worked out for me,” he said.

Wehner said everyone attending his commissioning “helped me out. Professors wrote letters of recommendation to get into the program. They did a fantastic job of teaching me, getting me ready for the next step and providing a good example.”

Aerospace is one of 11 departments in the College of Basic and Applied Sciences.