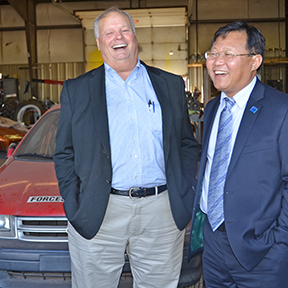 Renjie “Randdy” Dong of China Agricultural University in Beijing spoke with university administrators, including President Sidney A. McPhee and School of Agribusiness and Agriscience Director Warren Gill, before visiting the dairy processing unit on campus and MTSU Experiential Learning and Research Center (the farm) in Lascassas, Tenn.

Dong, head of energy engineering and low carbon technology at his university, said the dairy facility at the farm is “advanced” and was impressed by the fact about 40 Food and Drug Administration personnel were receiving training on campus during his visit.

“Research is fantastic here,” said Dong, who also serves as director in the Office of International Relations and executive director of the Biomass Engineering Center at China Agricultural University.

After spending more than 30 minutes with MTSU alternative fuels researcher Cliff Ricketts and surrounded by a variety of vehicles in the Vocational Ag Shop, Dong spoke of how he “found the green energy excellent” on campus. Green energy is any type of energy that is produced with less negative impact on the environment, lessening our dependence on fossil fuels.

“I meet with many universities,” Dong added. “Many leave it (research) in the laboratory. Here, you can see real practical application.”

Ricketts, who drove 2,600 miles coast-to-coast using no gasoline in March, has much in common with Dong.

“I was very impressed with him being up to date on technology in China and all his contacts he has in the United States,” Ricketts said. “He’s very open-minded and collegial. He’s a very brilliant man who is very up to date on alternative fuels and green energy. It’s his thing.”

One area of shared interest is algae. The veteran professor wants to do a cross-country drive with algae as the fuel source.

“That’s our game,” Dong said, “and it’s an alternative fuel he has studied. It’s green energy. He successfully has worked with a company (Tractor Supply for more than 20 years) and he has received funding that has been matched by the university. This shows the university supports green energy research.”

One of Ricketts’ students this semester in an ag leadership class, junior Ting Dai of Beijing, formerly attended China Agricultural University. He is an agribusiness major.

Schmidt called it “a great visit by a representative of our first strong partnership in China.”

“This partnership continues to grow stronger and the mutual benefits multiply each year,” Schmidt added.

In the spring semester, Dong’s son, Wenbo, is expected to work on research projects with MTSU’s Charles Perry, who holds the Russell Chair of Manufacturing Excellence affiliated with the Department of Engineering Technology.

Dong also was introduced to fellow countryman Song Cui, a first-year assistant professor in the MTSU ag program. Both have mutual ties to other U.S. universities.