Vile helps 'On the Record’ cel.. 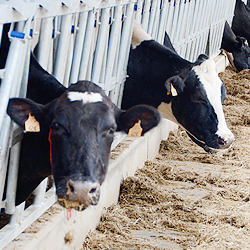 At the new MTSU Dairy, cattle can feed safely via stanchions that student workers and employees use to catch the animals. Attendees at the fall 2012 Agriculture Field Day will be able to observe the milking process in action.

In September 2011, about 500 people witnessed the grand opening of the MTSU Dairy.

On Thursday, Sept. 27, people can see and hear the dairy in action — and the rest of the MTSU Farm in Lascassas, too.

The annual Ag Field Day, which showcases the MTSU Experiential Learning and Research Center, will be held from 4 to 7 p.m. at the farm, which is located at 3211 Guy James Road.

The public is invited to the event, which will feature activity demonstrations and tours of new and updated facilities. Dinner will be served at 6 p.m. You can see a printable flier of the afternoon’s schedule at http://tinyurl.com/MTAgFieldDay12.

Dr. Warren Gill, director of MTSU’s School of Agribusiness and Agriscience, said attendees should once again be excited at what they’ll see at the dairy.

“This has been an amazing success story,” Gill said. “The move (from the former Manson Pike facility) has been successful because it is very student-friendly and because cow comfort measures have been extremely successful.”

Gill said Farm Lab Director Tim Redd will provide details on production improvement. “Cows are happier, and it has been done in a sustainable, responsible manner,” Gill noted.

Gill said the public “will be able to see live milking in action” at the $4.3 million dairy. At the farm, Gill said, guests “can tour the fall gardens, see the apiary, the honey process and see baby calves in the new calf barn.”

Since last year, many improvements have been made, including a new entrance and fencing, new landscaping, a new calf barn, new student gardens and nursery. The farm shop and equipment storage area also have been completed.

New signage stands at the entrance to the MTSU Experiential Learning and Research Center at 3211 Guy James Road in Lascassas.

A number of sponsors will provide displays of their products, Gill said.

Now entering his sixth year as ag chair, Gill said he would like to thank the MTSU community for drinking the chocolate milk sold in Dwight’s Mini-Mart and the McCallie Dining Hall, attending the MTSU Student Farmers Market, supporting the poinsettia and perennial plant sales and buying MTSU honey.

The annual School of Agribusiness and Agriscience news magazine highlights many of these activities, including the 2011 dairy grand opening. To read it online, visit http://tinyurl.com/MTAgNewsletter2012.