December 'Out of the Blue' fil.. 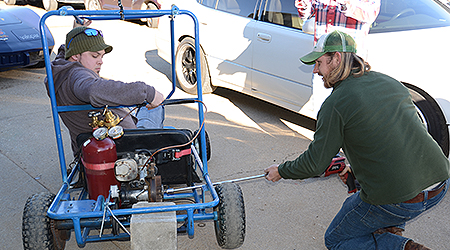 With the go-kart propped on a cinder block and Chris Morefield in the driver’s seat, Richard Hanson, right, uses a power drill to start their team’s hydrogen-powered go-kart before the Dec. 13 alternative-fuels class competition. (MTSU photos by News and Media Relations)

He and three research project teammates raced a propane-powered go-kart in competition against three other vehicles using different alternative fuels.

“Most people spend their last day doing an exam,” said Skelley, a senior from Murfreesboro, just minutes before finals and the last day of his last semester on Dec. 13. “This is pretty awesome.”

Four teams, comprising 19 of the 22 students taking an alternative-fuels class taught by Dr. Cliff Ricketts, competed in a drag race, a four-lap race and an endurance race.

The remaining three students worked on a special hydrogen peroxide-powered alternative-fuel vehicle that Ricketts called “the mystery car.” They have been performing research for entrepreneur Duane Griffin of Murfreesboro, who asked that the vehicle not be photographed.

Solar electric, ethanol and hydrogen were the other alternative fuels used in the unique final exam.

Ricketts said the propane vehicle was selected as a replacement for a planned biodiesel/cooking oil go-kart after the expense of the small diesel engine exceeded the team’s budget.

Drivers Aras Alexander, left, and Justin Dodd take off in their respective solar electric- and ethanol-powered vehicles as one of the alternative-fuels class races gets under way at the Tennessee Livestock Center.

“The kids were really excited. I’ll probably get two or three who will help me in the spring.”

In March, Ricketts plans another coast-to-coast trip of nearly 2,600 miles in a vehicle powered only by solar electricity and water-derived hydrogen.)

“The propane did as expected,” Ricketts added. “It had some structural problems that caused it to stop two or three times. The solar electric far exceeded expectations. The hydrogen go-kart never ran out of fuel. And the ethanol team had problems out of their control.”

Ricketts, who has called the class “the epitome of experiential learning,” said the ethanol team — made up of team leader Chris Coddington of Lebanon, Tenn.; Justin Dodd of Murfreesboro; Crystal Carney of Hendersonville, Tenn.; and Zach Hitchcock of Lewisburg, Tenn. — ordered badly needed parts that would not arrive until Dec. 14, the day after the class final.

“Too much horsepower is not a good thing,” Coddington said. “It needs a new carburetor. Once we put the ethanol in it, we got it to run. We just needed those parts.”

Senior Jonathan Prichard, a member of the hydrogen-peroxide team along with Dillon Hagewood of Murfreesboro and Skylar Daniel of Clarksville, Tenn., called the semesterlong class “an experience you cannot get anywhere else on a day-to-day basis.”

Prichard, a television production major in mass communication who planned to graduate Dec. 15, videotaped the competition. He will edit and upload it to YouTube.

Carney, a 2006 MTSU graduate, took the course as one of two continuing education classes this semester.

The single mom said the class showed the “fun of how to become independent.”

“When you look at all the possibilities, we don’t have to be dependent on foreign oil. And if a bunch of college kids can build alternative-fuel vehicles, the rest of the world can, too. The resources are out there.”

As a student at Beech High School, Carney took an agriculture class from Dale McDonald, who was one of Ricketts’ early alternative-fuels protégés.