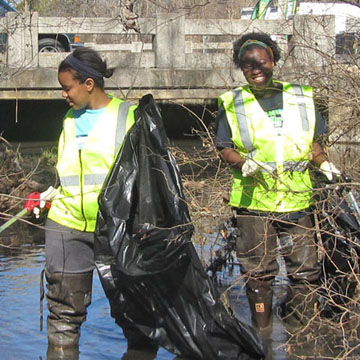 Rather than spending their week off relaxing or traveling to warmer climes with friends, some MTSU students donned gloves and wading boots or picked up a hammer and nail to give back to the community.

A group of roughly 30 student volunteers gathered last week to pickup litter surrounding Sinking Creek and the adjacent wetland off Memorial Boulevard. In the days that followed, some students volunteered to work on a Rutherford County Habitat for Humanity project on Sevier Street.

The events were part of MTSU’s Alternative Break Program, which is coordinated through the MTSU Center for Student Involvement and Leadership to give students opportunities to make a difference in the community.

The goal of the Sinking Creek project was to remove trash and debris clogging the stream and polluting the water supply, said Cynthia Allen, a coordinator with MTSU’s Stormwater Program, who noted that the MTSU campus drains into Sinking Creek.

The stacks of bulging black garbage bags resting on the parking lot on March 11 were a clear indication that the volunteers were needed. In all, roughly 2,200 pounds of trash (42 large garbage bags), five tires, two shopping carts, as well as various wood and metal pieces were collected. The City of Murfreesboro provided sanitation workers on site to collect and dispose of the trash.

“Litter is always a problem,” Allen said, adding that her office appreciates the strong faculty support as well as the cooperation of private property owners in allowing access to the cleanup areas.

MTSU senior Stuart Montez, a music business major from Little Rock, Ark., volunteered as part of his Principles in Management class, which has a social responsibility component. After navigating his way through the thick brush surrounding the creek to take a lunch break that day, Montez expressed satisfaction that his work was clearly paying off.

“It’s been great. I’ve enjoyed doing it a lot,” he said. “You can really tell that you actually are making a difference. I’ve had three full bags of trash already.”

Partners in the Sinking Creek cleanup included the City of Murfreesboro and the stormwater program of MTSU’s Office of Environmental Health and Safety. MTSU has a joint permit with the city to manage stormwater.

“Hopefully people with see this effort and do more on their own to combat litter,” said Robert Haley, coordinator of the city’s stormwater program.

For more information about the MTSU Stormwater Program, visit www.mtsu.edu/stormwater.

For more information about the MTSU Center for Student Involvement and Leadership, contact Jackie Victory, director of leadership and service, at 615-898-5812 or jackie.victory@mtsu.edu.

From left, Jackie Victory with the MTSU Center for Student Involvement and Leadership and Jim Rowland with the MTSU Stormwater Program finish up morning litter cleanup at Sinking Creek in Murfreesboro on March 11 before taking a lunch break with student volunteers. (Photo by MTSU News and Media Relations)