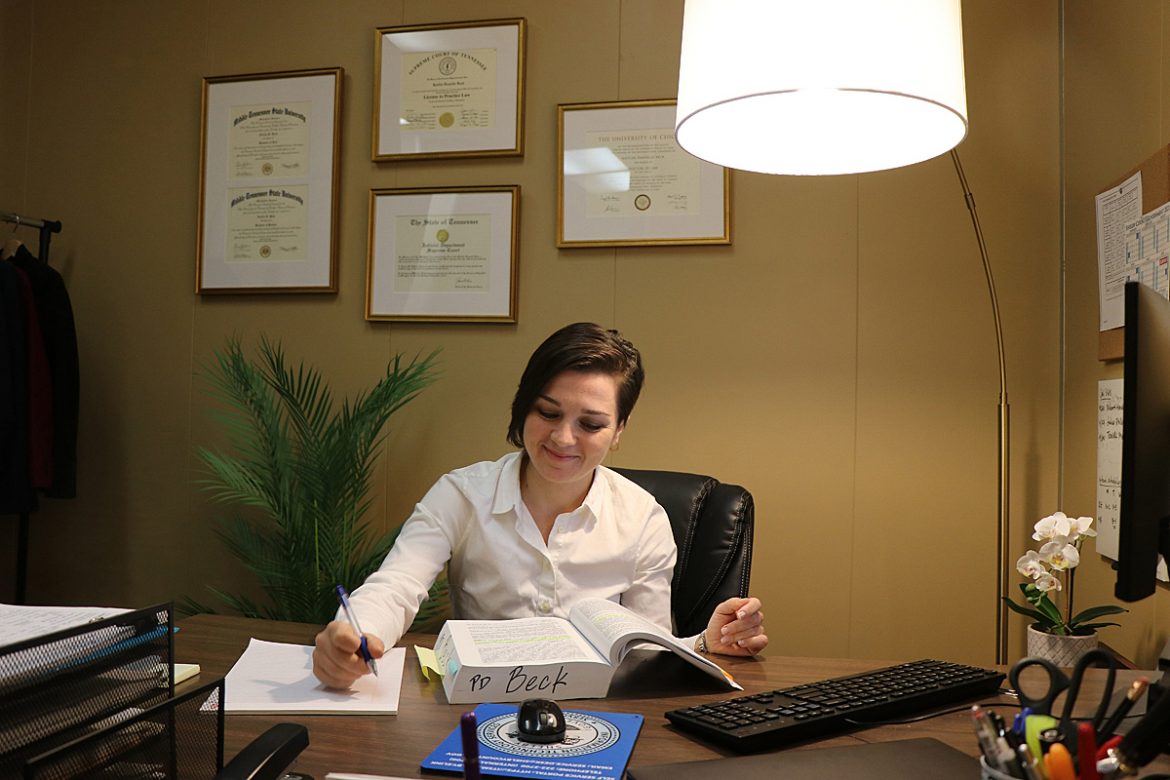 Assistant public defender and MTSU alumna Kaitlin Beck calls herself a fighter and radical skeptic, who questions authority easily and naturally — and is “very proud to be in court every day, meeting new clients, confronting new injustices.”

The 31-year-old Murfreesboro native is an attorney in Memphis, Tennessee, with the Shelby County Public Defender’s Office and is already making her legal mark in the courtroom. 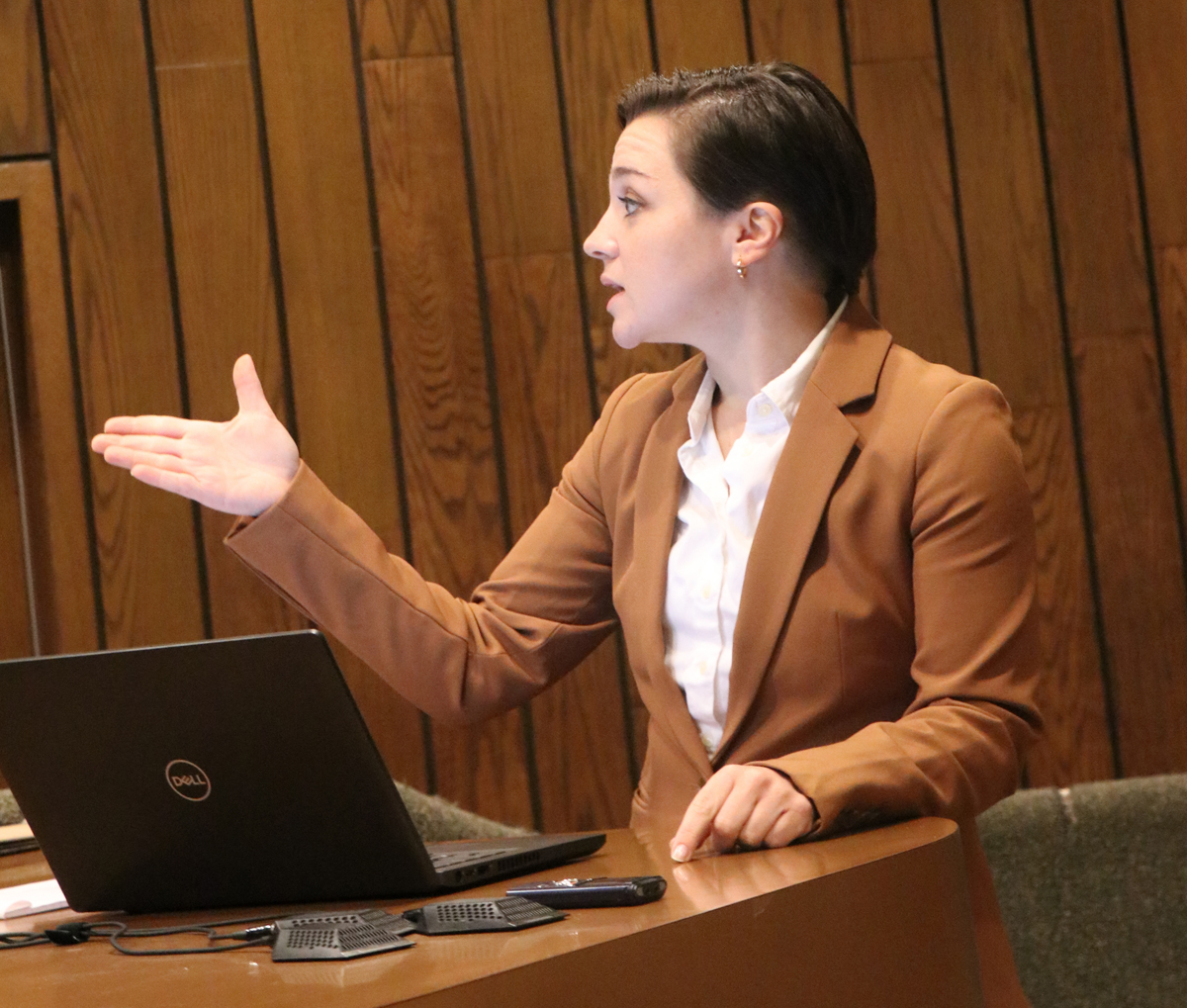 MTSU alumna Kaitlin Beck (Class of 2012) makes a point while preparing to defende a client. Beck is an assistant public defender in the Shelby County Public Defender’s Office in Memphis, Tenn., and 2021 Ashley T. Wiltshire Public Service Attorney of the Year. She graduated from MTSU with honors, with degrees in French Language and Economics. (Submitted photo by Margaret Mahaffey)

“I’m a big proponent of the underdog — all of my clients are David facing the awesome Goliath of governmental force,” said Beck (Class of 2012), the former University Honors College student and Buchanan Fellow. “When everyone in the room presumes ‘guilty,’ I’m just bursting to shout ‘not!’”

Her deep passion of embracing justice for all was recently recognized when she was honored by the Tennessee Bar Association as the 2021 Ashley T. Wiltshire Public Service Attorney of the Year in Tennessee.

The honor is given to an attorney who has provided dedicated and outstanding service while employed by an organization that is primarily engaged in providing legal representation to the poor. She was nominated for the award by her husband and MTSU alumnus Lee Whitwell (Class of ’11), a fellow lawyer and “my biggest supporter,” she said.  The couple met while students at the university.

Beck said she enjoys working on the frontline “to ensure my clients have the most robust defense possible regardless of their financial resources.”

“More than anything, I’m glad the Tennessee Bar chose to honor a public defender and rank-and-file public defender,” said Beck, who gives back outside of the courtroom by volunteering to judge high school and college mock trial competitions. 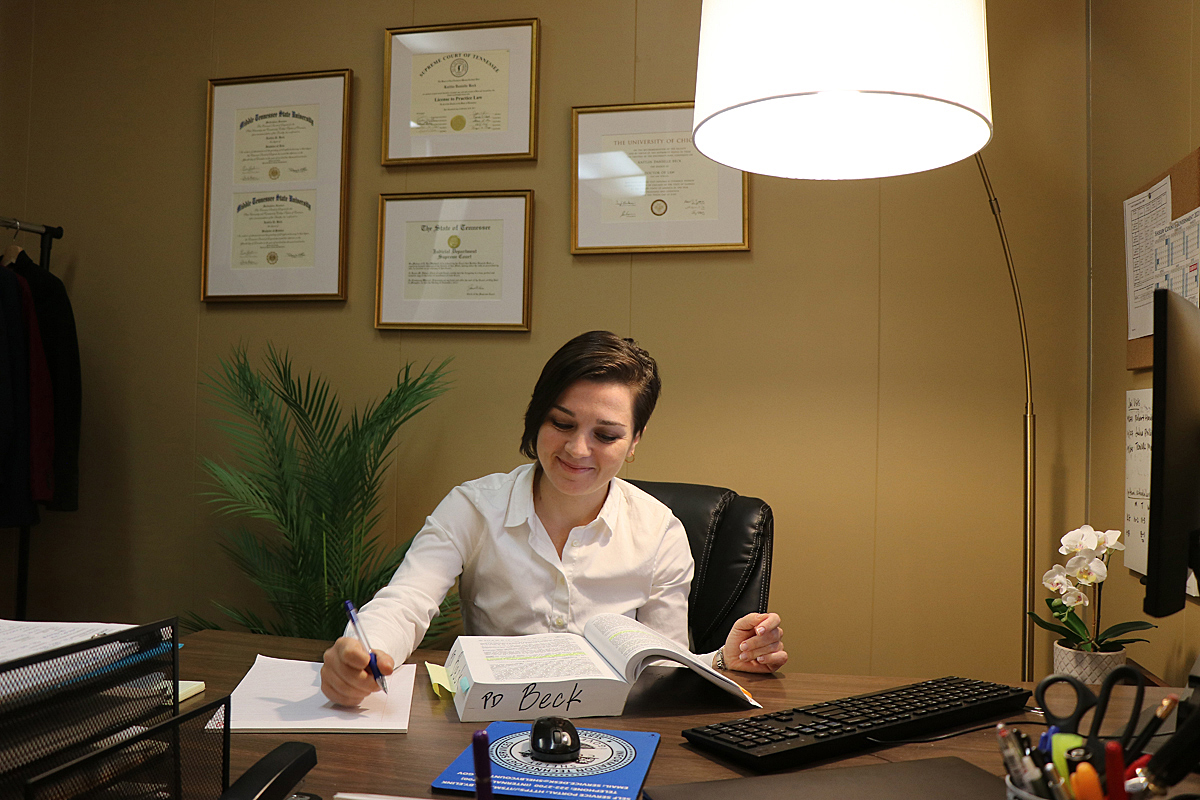 Kaitlin Beck, an MTSU alumna and assistant public defender in the Shelby County Public Defender’s Office in Memphis, Tenn., and 2021 Ashley T. Wiltshire Public Service Attorney of the Year in Tennessee, researches a suppression issue related to a client’s stop and arrest. Items on her office wall include framed certificates from her two MTSU bachelor’s degrees (French Language and Economics), law degree, license to practice and “Order of Admission” into the Tennessee Bar, permitting her to practice law in Tennessee, from the Tennessee Supreme Court. MTSU alumnus Lee Whitwell made the motion for her admission. (Submitted photo by Margaret Mahaffey)

A graduate of Oakland High School, she acknowledges the Buchanan Fellowship — the top scholarship offered by MTSU — was “the single largest factor in my attending MTSU. I was 17 and not prepared to pay for college. I was somewhat undecided on a major and it was a happy twist of fate that I picked pre-law. I thought it sounded impressive for my Buchanan Fellowship application.” She later switched to economics and defended her thesis in this field.

Attending an MTSU Mock Trial team activity was “my first look at a career that would help me to leverage my interests and talents — public speaking, debate, even acting to some degree — in a field that was not only intellectually challenging but would afford me the opportunity to work in the public interest,” said Beck.

The experience led to preparing for law school and competing in MTSU’s moot court program, providing her the confidence to compete and win the University of Chicago Law School moot court competition and eventually earn her law degree.

Her MTSU mentors include Honors Dean John Vile, his wife, Linda, and Ann McCullough, an associate professor in World Languages, Literatures and Cultures, as Beck also was a French major.

“Dean Vile managed the mock trial program and organized MTSU’s huge invitational competition in the fall,” Beck said. “I found myself in his office, for better or worse, once a week.”

McCullough encouraged her young student’s talent and “talked me through (future) practical and financial considerations. I attended a top-five law school and declined a full academic scholarship to Vanderbilt to do so,” said Beck.  “I honestly do not know if I would have dared to apply at the top-tier school if it hadn’t been for Ann.”

Beck’s connections to MTSU run even deeper, with younger sister Margaret Mahaffey graduating in 2020 with a bachelor’s in video and film production. 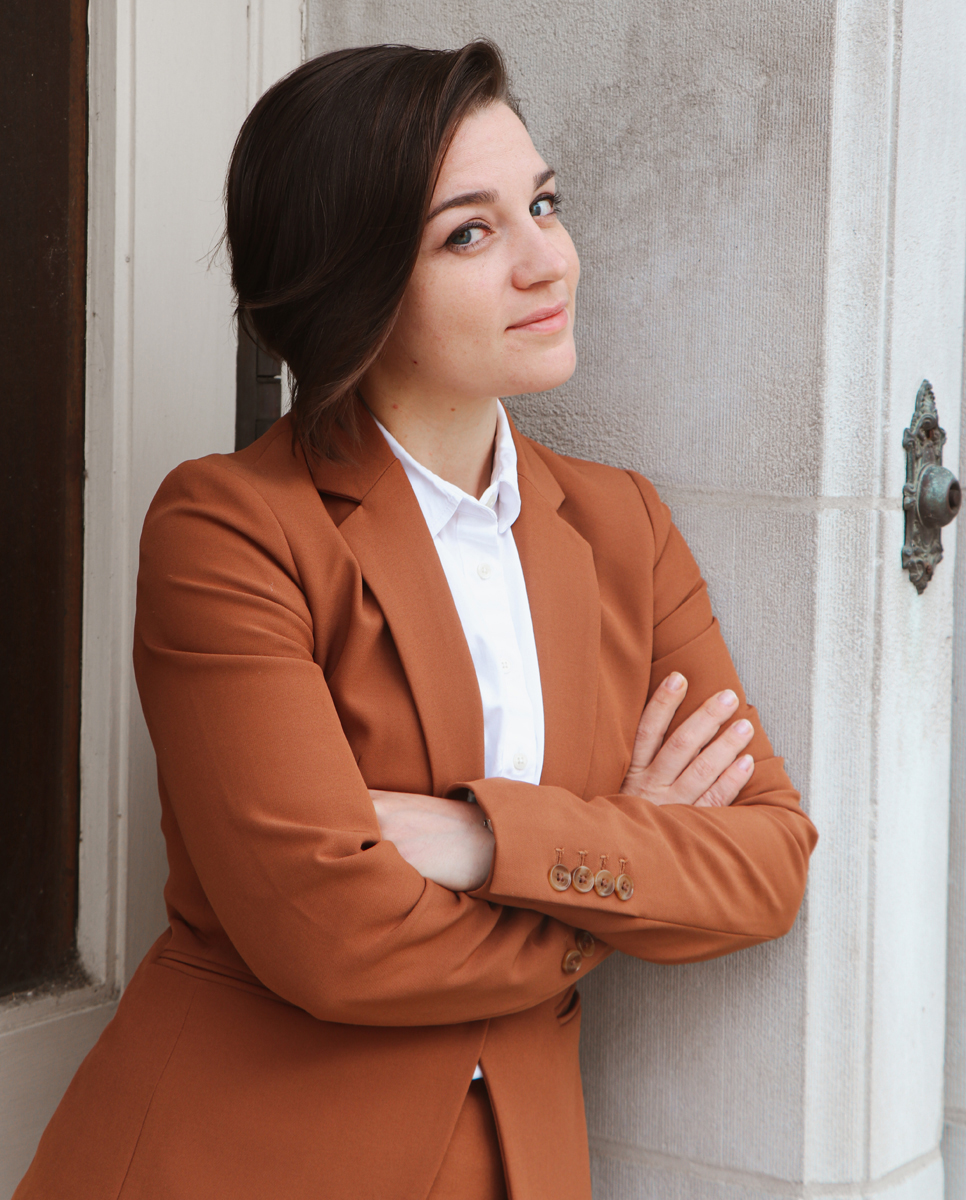 MTSU alumna Kaitlin Beck is the 2021 Ashley T. Wiltshire Public Service Attorney of the Year in Tennessee. She is an assistant public defender for the Shelby County Public Defender’s Office in Memphis, Tenn. (Submitted photo by Margaret Mahaffey)