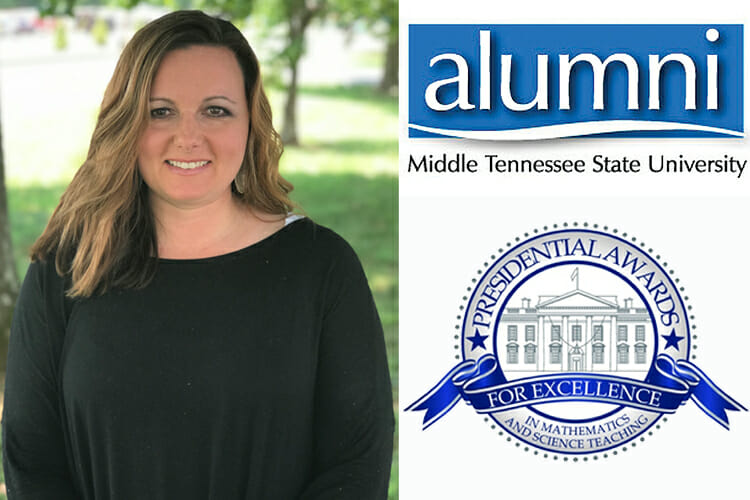 MTSU alumna Heather Knox has been selected as a Tennessee State Finalist for the Presidential Awards for Excellence in Mathematics and Science Teaching.

According to the Murfreesboro City Schools news release, this award is the highest in the nation for K-12 math and science teachers and is administered by the National Science Foundation on behalf of the White House Office of Science and Technology Policy.

Knox received her master’s degree in education from MTSU and doctorate from Carson-Newman. She currently teaches at Northfield Elementary and has been teaching at Murfreesboro City Schools since 2012.

“Heather is a gifted teacher who inspires students to achieve their highest potential,” said Linda Gilbert, director of schools and also an MTSU alumna, in the release. “She exemplifies the spirit of learning.”

Each year, up to 108 teachers are recommended by a national committee of distinguished scientists, mathematicians and educators to receive the PAEMST award, the release states.

Awards are given to mathematics and science (including computer science) teachers from each of the 50 states, the District of Columbia, the Commonwealth of Puerto Rico, the Department of Defense Education Activity schools, or the U.S. territories as a group (American Samoa, Guam, the Commonwealth of the Northern Mariana Islands, and U.S. Virgin Islands).

As a state finalist, Knox will be recognized by Tennessee Department of Education Commissioner Candice McQueen at an awards ceremony in the fall.

Northfield Elementary principal Gene Loyd praised Knox for her work in the classroom.

“Heather has a talent for teaching and a love for students,” Loyd said.

Award winners travelto Washington, D.C., where they are given networking opportunities, a presidential certificate and also a $10,000 monetary award provided by the National Science Foundation.