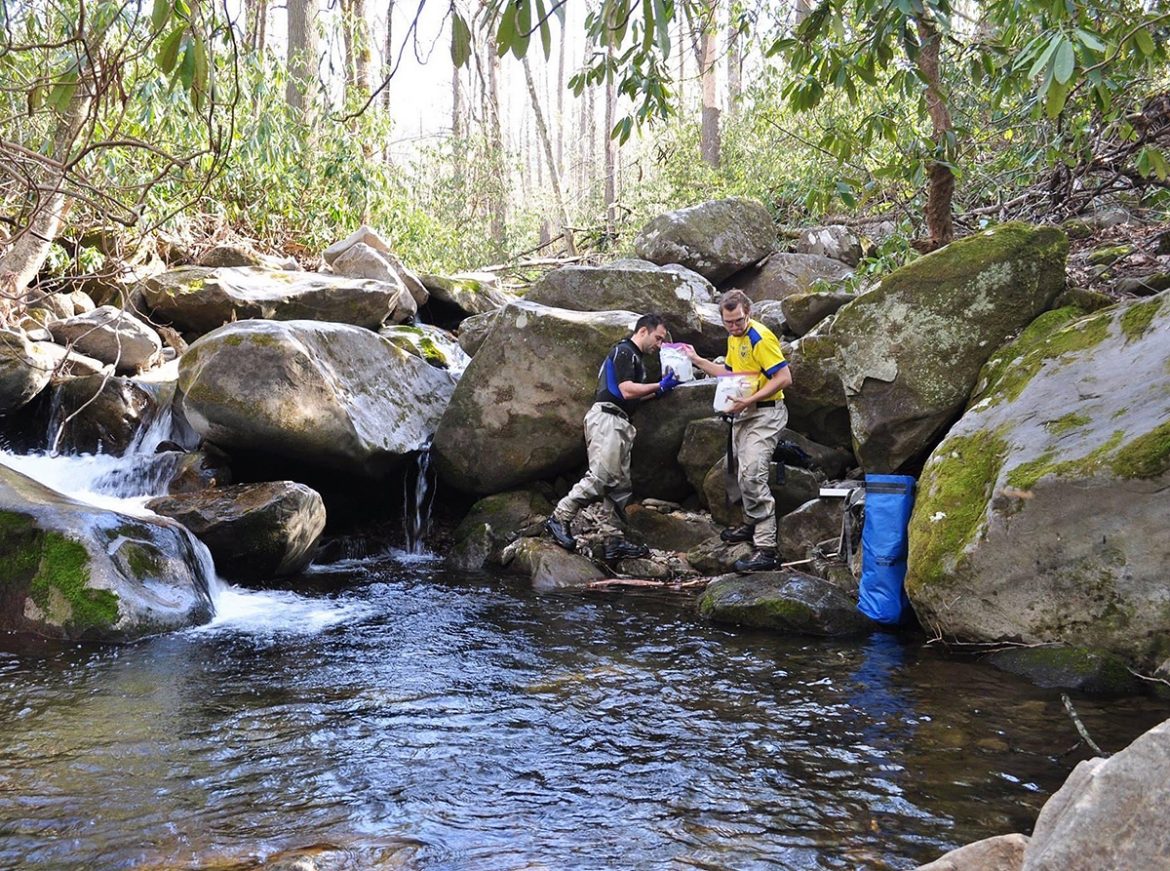 Alumni Gale Beaubien, Connor Olson and Andrew Todd joined Otter — the director of the MTSU Data Science Institute and biology professor and researcher — in being part of a team whose work was published in Environmental Toxicology and Chemistry, an international scientific journal.

The enterprise was led by Matt Chumchal, Texas Christian University biology professor and researcher, who said the project collaborators “propose using spiders as a cost-effective approach to monitoring pollution in the environment.”

“Students who engage in research outside the classroom gain more opportunities,” said Otter, acknowledging the resourcefulness of Beaubien, Olson and Todd all becoming coauthors on the paper. “They were students who were part of it — 100% in — and now they’re kicking butt in their own world.”

Beaubien works for the Environmental Protection Agency in Cincinnati, Ohio. Olson is a fourth-year doctoral student graduate teaching assistant at Syracuse University in New York. Todd’s spider exploration and strong academic resume caught the eye of research-driven TCU, where he’s pursuing his master’s degree and is a teaching assistant.

Otter wants full credit for MTSU’s part in the project to go to his former students, noting “it’s a good way to attract and recruit students. If a high school student or parent hears about this (research success), it can show (the student) ‘what I’m going to be doing with my time here.’ … To have this with my students is special. This is a big one for us.”

Beaubien (Classes of 2014, ’20), an EPA biologist working in research and development (a career goal achieved) living in the Cincinnati suburb of Fort Thomas, Kentucky, said the review paper “is a nice synthesis of the literature and something we all wish was out when we were first learning. … It will make this type of work more accessible to the next generation of scientists.” He considered it a “great group to work with and a fun topic.”

He points out the MTSU research group had a separate spider paper released for publication in 2020 “that modeled spider contaminant exposure to primarily song birds that eat spiders.”

Beaubien, 39, presented the work at a conference and was asked to write a blog for the Journal of Environmental Assessment and Management, which is connected to the Environmental Toxicology and Chemistry journal family. Their 2020 work was considered a top-10 paper by the journal.

Beaubien, a veteran who served in the U.S. Army, earned his bachelor’s (biology) and doctorate (molecular biosciences/emphasis in spider research) at MTSU.

An undergraduate and graduate student at MTSU from 2011-18, Olson (’15, ’18), a Franklin, Tennessee, native, said the published paper will benefit the research community by “allowing scientists who aren’t super familiar with spiders to learn more about how they’re being used,” he said. “The paper highlights what we don’t know about spiders and what areas need improvement. As researchers, it gives us a kind of research to-do list.”

Olson, 29, who said he would “be selling cheese” (a family business) had the science career path not worked out, said he’s “pleased with the trajectory that the spider toxicology research has taken. One of the reasons that the spider review was necessary is because there is so much work being published using spiders to answer toxicological questions. The more work done, the greater the need for a consolidation of the research and the better we can understand how to use spiders in new and informative ways.”

Like many people, Olson was not a fan of spiders, but they grew on him. He wanted to be involved in this research because the “initial appeal was its applied nature. We’re able to answer meaningful questions about the health of ecosystems using the spiders that nature provided.”

At MTSU, he met Mary Catherine Skolfield, a then-master’s student studying cellular/molecular biology. They married, and the MTSU alumna works with the research and development team at Zetagen Therapeutics in Syracuse.

Todd (’19), a Murfreesboro native who majored in biology at MTSU, said he was “blown away with how well the final product turned out. Every person involved made this paper better than I think anyone initially imagined. I have no doubt this review will be extremely helpful and beneficial to the field as a whole and to anyone interested in the research.”

Todd, 25, said his main role in the review paper was “to perform an exhaustive literature search to find any papers related to the topic of the review” and helping design the graphical abstract. He found 30 more publications, bringing the total number of papers in the review to 55.

The youngest team member wanted to be involved because “every opportunity to be on a publication at this stage in my career is an amazing opportunity and learn how some of the best scientists in the field go through the writing process. I also knew reading all of those publications during the literature search would give me a great head start on learning a large amount of information that would be extremely helpful in the completion of my master’s degree.”