How to Make On-Campus Parking .. 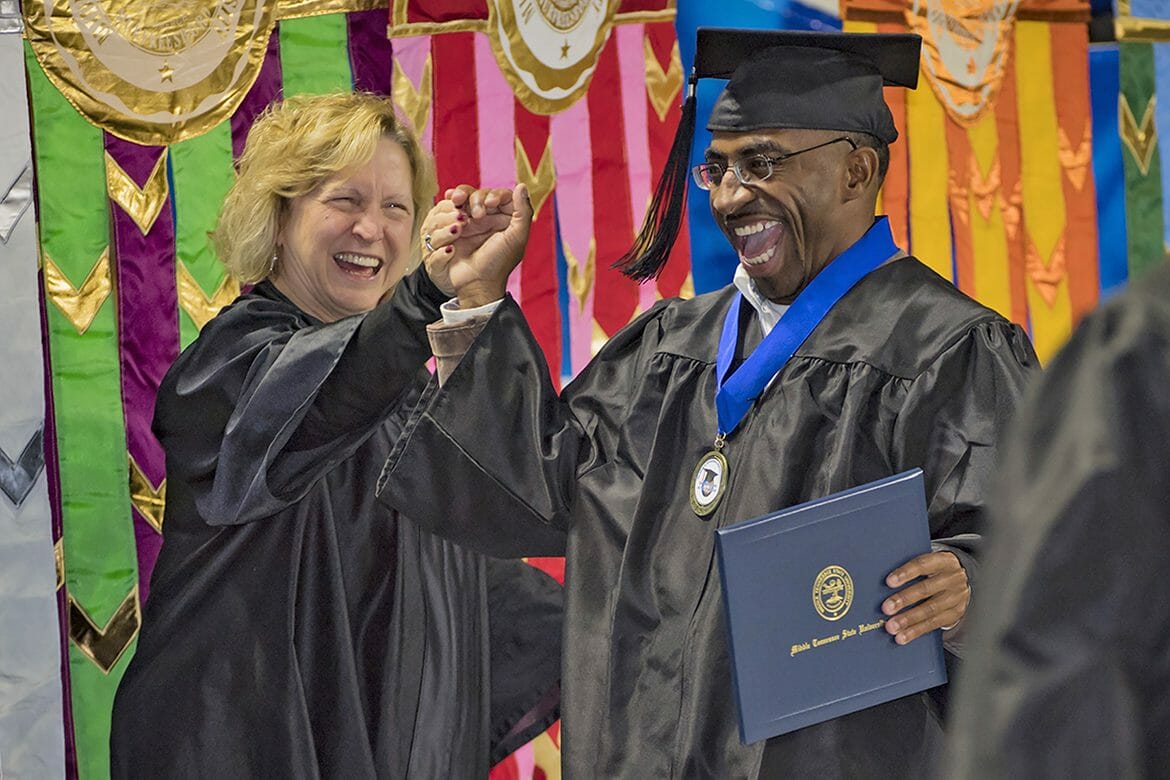 It’s been roughly six months since Tyree Rumph received his long-awaited degree through MTSU’s University College, the culmination of a six-year academic journey that eventually led him across the Murphy Center stage in December 2017.

Now the MTSU alumnus hopes to build upon that bachelor’s degree in liberal studies by pursuing an online master’s degree and eventually becoming a teacher in the next few years.

“I want to make a difference in people’s lives based on my own life experience,” Rumph said during a recent interview that brought him back to his alma mater’s campus.

MTSU alumnus Tyree Rumph smiles outside the Student Union Building in this June 2018 photo. Rumph received his bachelor’s degree in liberal studies in December 2017 after a challenging academic journey and now hopes to become a teacher. (MTSU photo by Keundrea Simpson)

After attending Lane College in Jackson, Tennessee, for two years, Rumph stepped onto the Blue Raider campus in fall 2006 as a psychology major. Staying in a house on Leaf Avenue with other roommates, Rumph started his True Blue journey.

“My teacher saw potential in me,” said Rumph. “She told me that MTSU would be a better fit for me.”

Rumph soon found MTSU classes to be much more challenging than he’d expected. He began to struggle, mentally and financially.

Since he didn’t know how to drive, Rumph had a hard time getting to his two jobs to make ends meet. The undergrad spent his days riding his bike back and forth from campus to one job about two miles away at the Krystal fast-food restaurant on the busy Lascassas Pike.

He pressed hard to overcome his obstacles but was ready to give up. Rumph was actually in the process of withdrawing from the university when he met Ben Jones, director of the Office of Accounting Services at MTSU.

Everything changed for Rumph that day. The pair began sharing lunch together once a week, and Jones helped Rumph with his academics. The new friendship developed into a mentorship that eventually led to Rumph learning how to drive and inspiring him to stay on track.

“When you teach someone important life skills such as driving, you build a connection with that person,” said Jones, whose job generally doesn’t include direct interaction with students.

“I understood him as a person and found out what made him tick.”

Moving on campus into Judd Hall to find a more learning-focused environment, Rumph also decided to change his major to sociology in fall 2008. After realizing neither sociology nor psychology was a good career choice for him, however, he somewhat lost hope. It wasn’t long before he also lost his financial aid, forcing him to drop out of school from 2009 until 2013.

“I wasn’t mentally ready to succeed,” a now-reflective Rumph said, adding that he realized “if I could get myself ready and financially stable, I was ready to go back.”

For two years Rumph held a steady job at Amazon. He also worked at General Mills and at Interstate Warehousing in Murfreesboro to stay financially stable as he worked toward his educational goal.

With Jones helping along the way, Rumph stayed positive throughout the rest of his academic journey and took his seat among his fellow MTSU graduates on Dec. 16, 2017, in Hale Arena inside Murphy Center. His family traveled from Detroit, Michigan, to proudly witness their loved one’s achievement.

“I realized that if I applied myself more, I would get it,” Rumph said.

Rumph still works for Interstate Warehousing and also serves as a substitute teacher through PESG, an educational staffing program, as he plans his next life steps.

Jones continues to root for his mentee.

“It has been a long road, and one that I hope soon ends on the other side of the rainbow,” Jones said of his friend.

This portion of a 2012 “I Am True Blue” promotional video shows Jones and Rumph.