'The Sound of Preservation': L..

Some tickets still available for this week’s...

Curiosity reigns during 18th a..

Some tickets still available for this week’s ‘American Tall Tales’ 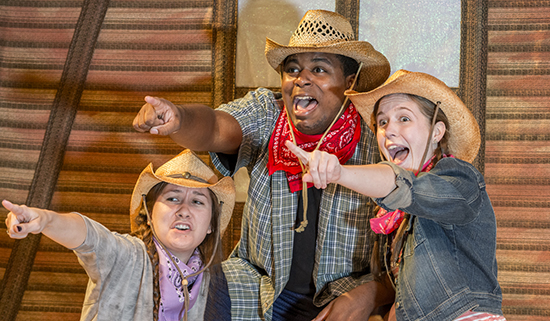 A few tickets are still available for this week’s MTSU Arts performances of the original production “American Tall Tales” in Tucker Theatre, but they’re moving fast!

Performances are being scheduled at area schools, too.

MTSU theatre students Erin Davidson, left, Dominic Gillette and Harley Walker pretend to see a bear — or maybe it’s just a grownup demanding they come down from the attic and take their baths — during rehearsals for “American Tall Tales,” an award-winning original production with performances set Sept. 24-28 in the university’s Tucker Theatre. Tickets are available online, and performances are being scheduled at area schools, too. (MTSU photo by Darby Campbell)

Tickets for the MTSU Arts performances, sponsored by Ascend Federal Credit Union, are available online here and at the Tucker Theatre box office an hour before curtain times.

“It’s kind of an American spirit that we take these hardships and turn them into stories of incredible courage and strength.”

Most Americans have heard or read the outlandish tales and impossible boasts of these “incredible” stories during childhood. Students in Halladay’s Theatre for Young Audiences course in 2003 turned to those tales when searching for a unique children’s play.

“They wanted to tour with it and not have to deal with royalties,” Halladay recalls, “so they wrote the script and the songs. It took us a full year to prepare it for Tucker (Theatre performances), and then we were invited to youth theater festivals in Finland, Russia and Latvia, winning two awards at the Baltic Theatre Festival.”

Those award-winning summer 2004 overseas performances, along with recent summer theatre trips to Honduras and Guatemala to present other original plays to young audiences, helped students set the stage to bring “American Tall Tales” back to MTSU.

“Theatre is a whole different experience with kids,” senior theatre major Harley Walker of Murfreesboro says with a laugh. “The energy is entirely different, which is so nice. Of course, it’s a family show as well. Parents can come and still enjoy it, and older kids too.”

The updated production, set in an attic where the players take turns telling their stories, features a simple and easily transported set and costumes designed by theatre professor Virginia Donnell with assistance from student designer Stephanie Bottum.

“We’re doing everything (in the play) with stuff we found in an attic,” adds senior theatre major Erin Davidson of Eagleville, Tennessee. “Any of the kids can go home and say ‘I can do that! I can pull stuff out of the attic and I can make a play, too, with my friends!’”

Davidson is portraying “Sage the Bear,” and Walker is “Slue-Foot Sue.” Parents and teachers who want to share the characters’ stories with their children and students can download the “American Tall Tales” educational packet, which Bottum also prepared, at www.mtsu.edu/theatre/TTEd.pdf.

Click on the poster above for ticket information for “American Tall Tales” at MTSU’s Tucker Theatre Sept. 24-28.

“This is our cast’s take on it, and that’s what makes it even more special to us,” explains Dominic Gillette, a junior theatre major from Chattanooga, Tennessee, who’s portraying “John Henry” onstage.

“We hear these songs being sung that we’ve created and it gives us that feel-good type of vibe. Creating together with a group is great.”

“American Tall Tales” will also be touring area schools on Fridays until the end of spring 2015 to share the fun more conveniently and inexpensively with local children.

“For a school to come to see a matinee at Tucker Theatre costs $3 per child,” Halladay says, “which is a good price, but then they also have the cost of the buses and then scheduling the times and getting the chaperones. If a school has 300 children, it would cost them $900 for tickets alone. We can bring the performance to the school for $700 a show and save them hundreds of dollars.”

Halladay, who’s won multiple awards and grants for her children’s theatre projects, teaches classes on children’s drama and speech, storytelling, theatre in education and playwriting. Her love for children’s theatre has spread to her students, too, as they’ve learned to write and perform for young audiences as well as more typical theater crowds.

During last spring’s colorful production of “A Year with Frog and Toad,” for example, “the whole cast was expecting squirming and yelling in the seats,” says Paul Gary, a sophomore theatre major from Knoxville who portrayed “Toad.”

“But they were just sitting there, with the rest of the audience, paying attention,” he adds as he prepares to play “Mike Fink.” “Jette is truly a blessing. I wouldn’t have anyone else do this show with us.”

Funds raised by local performances and school tours will help with expenses when the troupe takes “American Tall Tales” to Ireland and other portions of the United Kingdom next May, Halladay says.

“This show’s great because it’s a bunch of children who are playing in an attic, and they find this magic pot that turns them into these legends,” she adds. “But we also make it clear that every child has a legend in him. Every child is a hero.

“Also, these children are just using junk they find in an attic. You don’t need money to buy props and costumes and all. As long you have an imagination, you can turn it into whatever you want.”