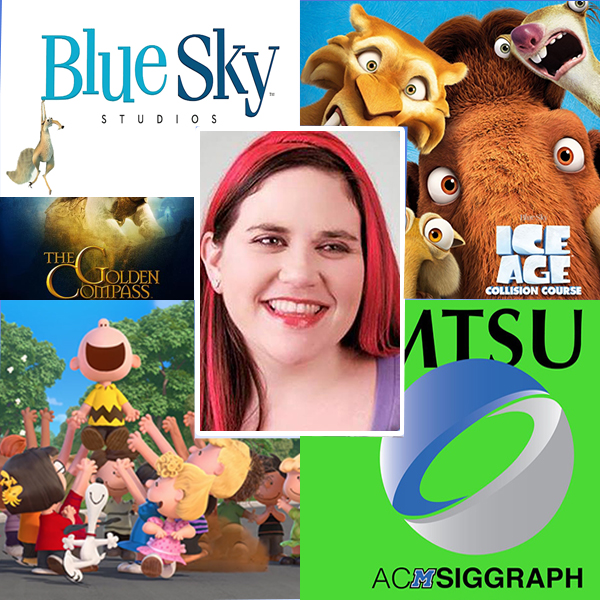 An Oscar-winning MTSU media alumna is returning to campus Wednesday, Aug. 17, for a special student event that’s also open to the public.

Mikki Rose, a member of the Rhythm & Hues Studios team that won the 2008 Oscar for Visual Effects for their groundbreaking animation work on “The Golden Compass,” will speak to the MTSU student chapter of ACM SIGGRAPH at 6:30 p.m. Aug. 17 in Room 148 of the Bragg Media and Entertainment Building on campus.

Click on the logo to visit the Facebook page for the MTSU Student Chapter of ACM SIGGRAPH.

The event is free and open to the public. A searchable, printable campus parking map is available at http://tinyurl.com/MTSUParkingMap.

Rose, who earned her MTSU bachelor’s degrees in mass communication/digital animation and computer science in 2005, now works for Blue Sky Studios in Greenwich, Connecticut, as a Fur Technical Director — what she calls “a CG hair stylist” — specializing in hair and cloth visual effects and animation for feature films.

She’s been affiliated with the Association for Computing Machinery’s Special Interest Group on Computer Graphics and Interactive Technique since 2002, rising from student volunteer to co-chair of the organization’s 2015 international computer animation festival and serving as production services chair for the 2016 SIGGRAPH international conference.

Rose’s talk with the student group will focus on her career, which has also included a stint at Sony Pictures Imageworks. At Rhythm & Hues, she worked on two “Alvin and the Chipmunks” movies and “Night at the Museum: Battle of the Smithsonian,” “The Mummy: Tomb of the Dragon Emperor” and “Aliens in the Attic” and managed a team of technical animation directors.

At Sony Imageworks, Rose’s talents dressed and coiffed characters in “Alice in Wonderland,” “Arthur Christmas,” “Men in Black III,” “Hotel Transylvania,” “Oz the Great and Powerful” and “Cloudy with a Chance of Meatballs 2.”

Her most recent projects with Blue Sky include 2015’s “The Peanuts Movie,” this year’s “Ice Age: Collision Course” and the upcoming feature “Ferdinand.”

In 2012, Rose was added to the College of Media and Entertainment’s “Wall of Fame,” an annual honor reserved for accomplished media alumni.

You can watch Rose briefly discuss her involvement with SIGGRAPH in this video:

MTSU media alumna Mikki Rose, who’ll return to campus Aug. 17 for a special visit, is among the animators who worked on this year’s “Peanuts Movie.” This scene from the Blue Sky Studios film shows plenty of Rose’s specialty, which she calls “CG hair stylist.’’ (Photo courtesy Blue Sky Studios)