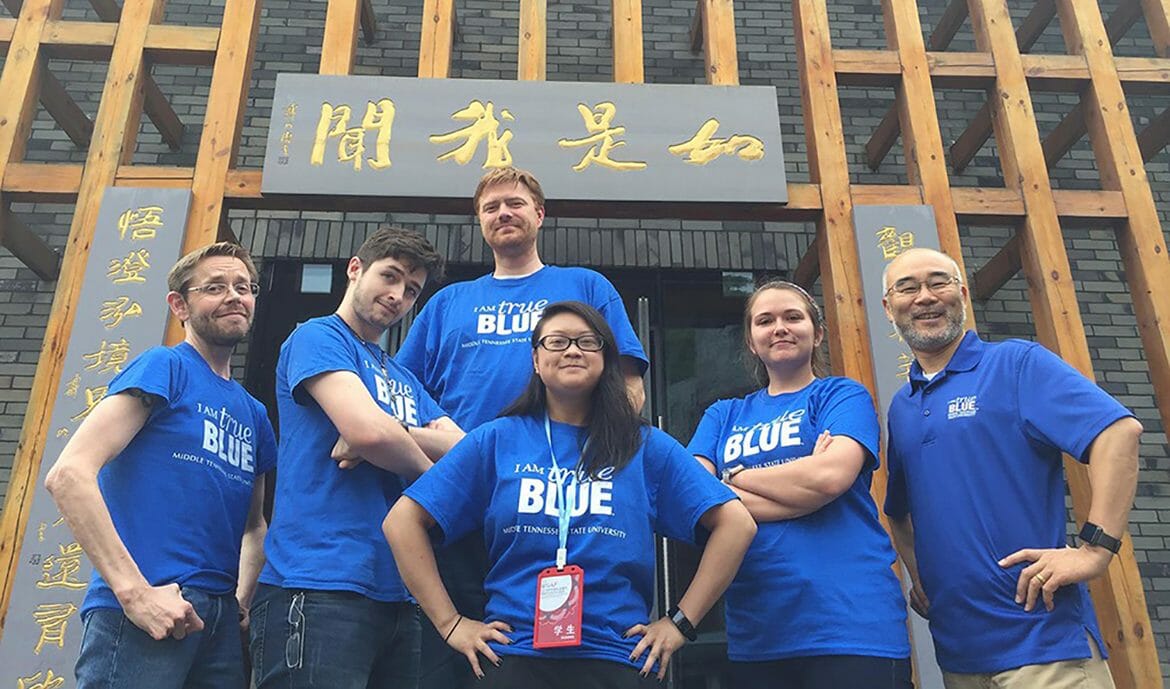 Kevin McNulty, an associate professor in the Department of Media Arts, and Dr. Guanping Zheng, director of the Confucius Institute, traveled with MTSU students Ryan Barry, Colleen Green, Shaun Keefe and Chi Nguyen in May to the international public service initiative that began just one year ago. Dr. David Schmidt, vice provost for International Affairs, attended the opening ceremony and gave the keynote speech.

McNulty said his students felt it was important to make a film about the environment. During the 2018 spring semester, the team met weekly to discuss the idea and map out the story and design.

“The story grew out of their frustration that not everyone cares or is as informed as they should be,” he said. “Our main protagonist, Tera, is not only the embodiment of this frustration, but also their hope and optimism that change is still possible.”

The result was an inspiring four-minute animation entitled “The Green Touch” about a young environmental activist who realizes she has the power to change the hearts and minds of those around her. The film took home Best Charity Award at the Wonderful World film exhibition and was one of the shorts chosen as the festival’s “best in show.”

While in Guiyang, the visiting MTSU students were asked to create an additional 30-second work based on what they had learned during their recent excursions around the local sites. They were assigned to groups of four, with every member from a different university and/or country.

Language and cultural barriers made communication difficult, but the students found a way to create, shoot and edit a 30-second piece within the given 24-hour time frame. Each piece was different, ranging from narratives to documentaries to experimental films.

MTSU animation student Shaun Keefe, left, assists his newly formed international team members with composing a shot during a May trip to a town outside of Guiyang, China, as part of their participation in the second annual Wonderful World: 2018 International Students Ocean Short Film Exhibition. (Submitted photo)

The Wonderful World exhibition is a friendly film competition that focuses on the creation of public service announcements with new topics each year. The PSAs can be short live-action films, animations or news packages.

MTSU participated in the inaugural film festival held in 2017 to raise the awareness of autism, an initiative began by Qingdao University of Science and Technology’s Dean Yang. Four countries with animation and media programs initially participated: the U.S., Germany, South Korea and China.

This year, 22 universities representing seven countries participated: U.S., China, Germany, France, South Korea, Malaysia and Tanzania. The Chinese-based international company Homnich served again as the exhibition’s sponsor by providing hotel, food and transportation for the students. Half of the films submitted were animation while the rest were live-action shorts, all screened during a full-day film exhibition held in Guiyang. The Confucius Institute provided the visas for the MTSU representatives.

The MTSU animation team’s film, “The Green Touch,” plays for an international audience during the best in show screening and award ceremony at the second annual Wonderful World: 2018 International Students Ocean Short Film Exhibition held in Guiyang, China, in May. (Submitted photo)

MTSU has been officially invited to participate in next year’s exhibition on the topic of animals. Billy Pittard, chair of Department of Media Arts that houses the Animation program, is supportive of the endeavor.

“This experience has expanded our students’ horizons in multiple ways,” said Pittard. “Animation is truly a universal language.”

McNulty is continually motivated by his students’ teamwork.

“I’m so impressed and pleased with how well the students worked, both in terms of their technical skills and teamwork,” he said. “They all genuinely cared about making a quality film. That passion and commitment is extremely important and will serve them well in the industry.”

For more information on the Animation program at the Department of Media Arts, visit www.mtsu.edu/mediaarts.

Pictured from left, facing camera, MTSU animation students Shaun Keefe, Chi Nguyen, Colleen Green and Ryan Barry exchange ideas and approaches with two other international students, far left and right, related to their 30-second film projects based on what they learned visiting local towns during a visit to China in the spring. The students were in China participating in the second annual Wonderful World: 2018 International Students Ocean Short Film Exhibition. (Submitted photo)

A team of MTSU animators led by associate professor Kevin McNulty participated in a film exhibition in China in May. Shown from front left in Guiyang, China, are McNulty; students Ryan Barry, Chi Nguyen and Colleen Green; Dr. Guanping Zheng, director of the Confucius Institute at MTSU; and student Shaun Keefe, standing below the sign. (Submitted photo)