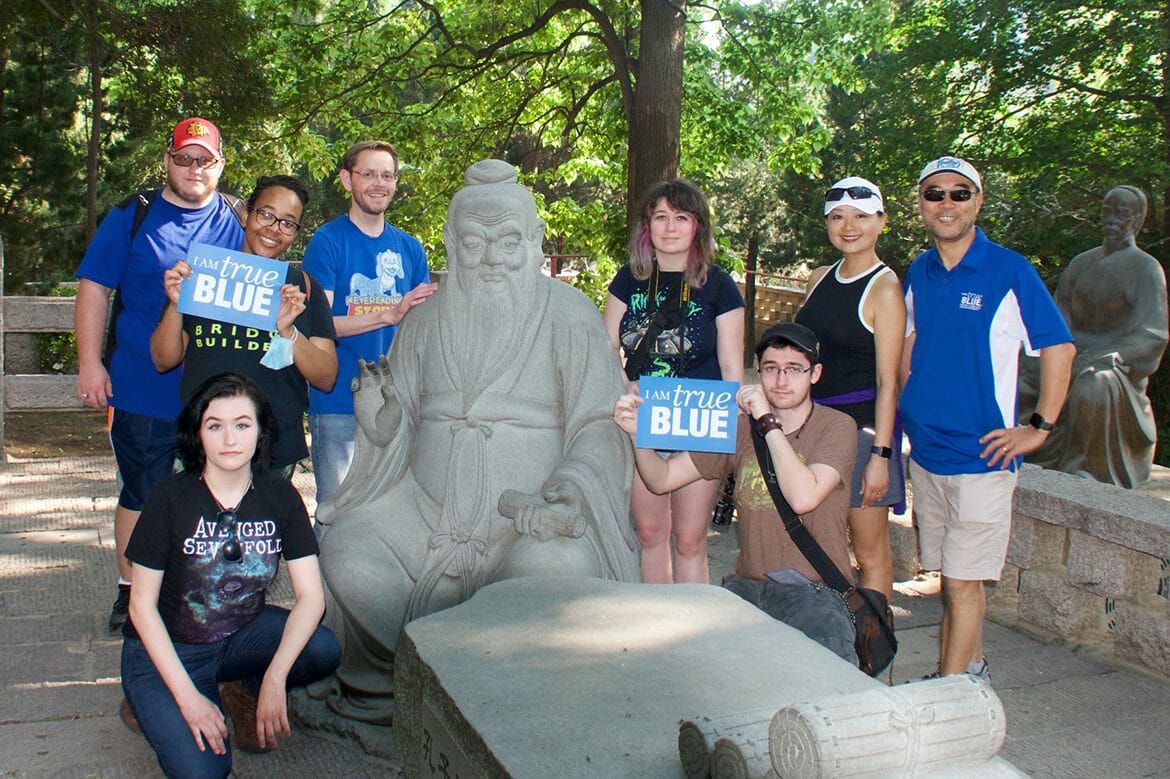 A small group of students in the MTSU Department of Media Arts’ animation program will be headed to Guiyang, China, in May, after the university was invited back for a second year to participate in what is now being called “International Students Ocean Short Film Exhibition.”

Kevin McNulty, associate professor and coordinator of the animation program, will lead the group of students, who were part of a larger team of animation students who created a short film about the environment that will be featured at the exhibition.

McNulty said his students chose the environment as their film topic out of three topic choices that included “the old/the child” and “autism,” the topic of last year’s film.

Julia Daugherty, one of the five MTSU Department of Media Arts animation students who traveled to China in Spring 2017, helps put finishing touches on an animated short film on autism created by a group of media arts students. Another group of MTSU animation students is returning to China next month with a new film. (Photo submitted)

Though four students will travel with McNulty to China in May to present the finished animated short film, a total of nine students have been working on the film this semester — Ryan Barry, Colleen Green, Rachel Huttinger, Shaun Keefe, Carson Kirkpatrick, Ngoc Chi Nguyen, Grace Roberts, Derrick Roe and Yu Ju Shih.

Barry, Green, Keefe and Nguyen will join McNulty to attend an exhibition that “is much bigger than it was last year,” McNulty said.

This year’s event features 24 participating schools from 10 countries, including Canada, China, Germany, Italy, Malaysia, the Republic of Korea, Singapore, Thailand, the United Kingdom and the United States. McNulty said he sees this as valuable experience for animation students and international exposure for the program and university.

McNulty credits Dr. Guanping Zheng, director of the Confucius Institute at MTSU, for helping the university become a co-organizer of the exhibition.

“While in Guiyang, we will be going on multiple cultural excursions to learn about the local people and their culture,” McNulty said. “With the assistance of the attending professors, students will then be broken up into multi-language, multicultural teams to create short films about local folklore, all within 48 hours.”

McNulty said the MTSU team plans to submit their work to film festivals around the world, particularly those with the environment as a theme.

Last year’s MTSU student film, entitled “Sensations” and focused on autism, also will be submitted to film festivals. The team will also explore how the film might help area autism organizations.

This screen shot is from an animated short film on autism created last year by a group of MTSU animation program students that was featured in an exhibition in China. This photo features Esmond, the autistic protagonist in the film, confronting and banishing his adversaries. (Photo submitted)

Last year, five MTSU animation students participated in the exhibition, joining students from three other countries in developing a film to help raise awareness and understanding of autism.

A partnership with Qingdao University of Science and Technology, coordinated by Dean Jianhua Yang, shaped the unusual collaborative arrangement named “The Beautiful World.”

Students in McNulty’s EMC 4900 Individual Problems course not only created an animated short film illustrating how external stimuli affect people on the autism spectrum, they flew to China to finish the film, meet other student animators and take part in a celebration ceremony.

“We joined students from universities in South Korea, Germany, and China — five from each. Although a script was provided, each group followed their own interpretation,” McNulty explained.

The MTSU students — Angel Agee, Ryan Barry, Julia Daugherty, Mahkayla Grogan and Clayton Smith — worked with a woman who has two children, one of whom is on the autism spectrum, to learn more about the condition that affects about 1 in 50 children.

MTSU Department of Media Arts animation students Clayton Smith, left, and Mahkayla Grogan, work on an animated short film on autism created by a group of media arts students who traveled to China in spring 2017. Another group of MTSU animation students is returning to China next month with a new film. (Photo submitted)

“We based our story on what we learned from this family,” said McNulty, explaining that stimuli such as light, noise, and touch can be physically painful and debilitating to people who have the neurodevelopmental disorder.

“We personified the external forces as creatures that confront our character Esmond, who was named after the child in the family,” McNulty continued. “We had Esmond do ‘stimming’ to get rid of the creatures.”

Stimming is short for self-stimulation, one of the ways people with autism calm themselves, and includes hand flapping, rocking, spinning, and repeating sounds.

The film shows Esmond banishing an ice creature that blows snow, a snake-like creature, and a lizard creature with extremely bright eyes, all so that he could go down a hall to a bathroom, a graphic explanation of the challenges faced by some people with autism in what others consider ordinary circumstances.

One of the highlights of the nearly two weeks McNulty and his students spent in China last year was a visit to an autism after-hours care facility. They also participated in several cultural excursions with memorable photo opportunities as well as attending a conference where both McNulty and Zheng made presentations.

Kevin McNulty, faculty director of the MTSU Department of Media Arts animation program, listens to other presenters at a conference during a spring 2017 visit to China. McNulty led a group of MTSU students who created an animated short film on the trip and is directing a second group trip to China this May. (Photo submitted)

McNulty said he’s pleased that the students have been able to enjoy this unique multidimensional experience for a very modest cost.

“The sponsor of the project paid for everything in China, but we had to get there,” McNulty explained. Combined support from the Confucius Institute, MTSU’s Office of International Affairs, and the Undergraduate Research Center resulted in the students paying only about $200 each.

Animation is one of five academic programs available in the Department of Media Arts, one of three departments in the College of Media and Entertainment. For more information, visit www.mtsu.edu/mediaarts.

In this spring 2017 photo, an MTSU delegation visits the Tai Qing Gong Temple in Laoshan Moutain, Quindao, China, on one of the cultural excursions enjoyed y the group of MTSU Department of Media Arts animation students and faculty during their trip. Standing, from left, are Clayton Smith, Mahkayla Grogan, professor Kevin McNulty, Julia Daugherty, Jiankun Wang and Dr. Guanping Zheng; and kneeling, from left, are students Angel Agee and Ryan Barry. (Photo submitted)