MTSU partners with city on “Cr.. 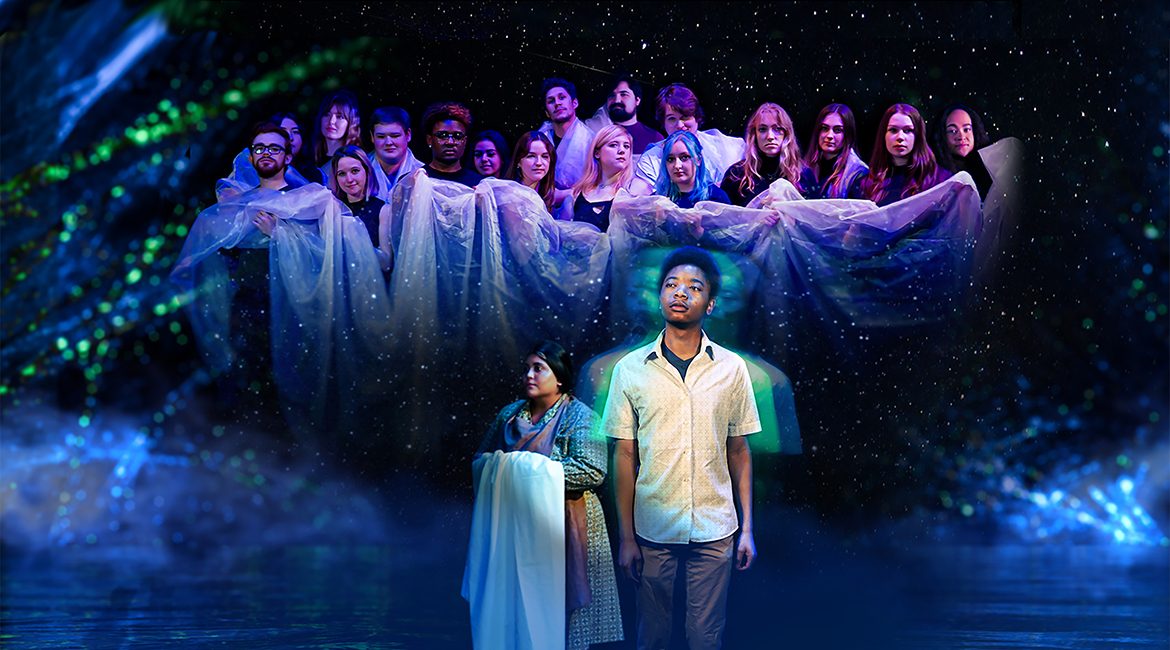 MTSU Theatre students are inviting local audiences to join the adventures of the young refugee “Anon(ymous)” as he searches for home when they bring playwright Naomi Iizuka’s reimagining of “The Odyssey” to Tucker Theatre Feb. 17-20. 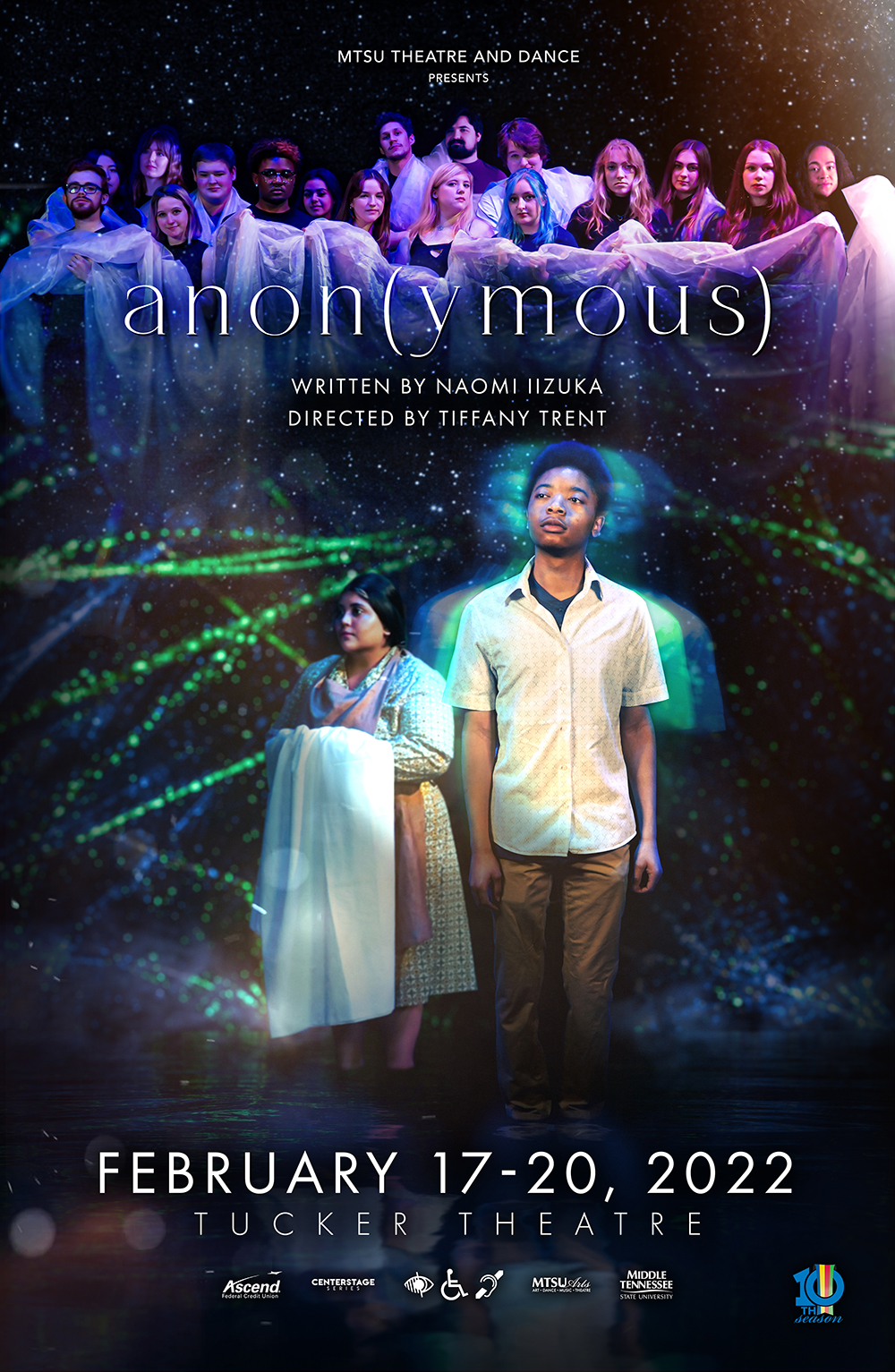 Tickets are $10 general admission and $5 for K-12 students. MTSU students, faculty and staff can attend free by presenting a current university ID at the Tucker Theater box office.

Information on tickets, a digital program listing the cast and crew, and more show details are available here.

Guests are encouraged to wear masks and follow social distancing measures inside Tucker Theatre. The venue is fully accessible for people with disabilities, including those with hearing, vision and mobility impairments.

“Even with all the different genres (of plays) we produce, our shows are often very realistic,” explains Trent, who joined MTSU last fall from the University of Chicago. “We’re very excited about the imagery in this play, for our scenic, sound, costume and lighting designers to create and show it, and for our ensemble and the audience to experience.

“I always expect students to bring their gifts into the room, and I’ve certainly been delighted by the skills that the students have — their skills in music, design, script analysis, stage management and in literally every area. I’ve been delighted by the manifestation of the training they’ve been getting from the faculty.”

“Anon(ymous),” first performed in 2006, tells a new version of Homer’s epic poem “The Odyssey.” In the original 8th century BCE story, the Trojan war hero Odysseus is beset with nearly every obstacle imaginable as he tries to get home to his beloved wife and son.

Iizuka’s update adds a 21st-century understanding to the quest, following young Anon, who’s been separated from his mother, as he ventures across the United States, meeting foes and friends alike and trying to use his memories and his story to find home again.

“It’s very much a coming-of-age play, which fits undergraduates really well,” says Trent. “It’s also about finding what home means and the people who make home feel like home and give us a sense of belonging.

“Those themes really matter to me as well, especially working with college students and with younger students in theater as I have over the years.”

Trent earned her bachelor’s degree in politics, economics, rhetoric and law at Chicago, then followed it with a Master of Fine Arts in directing from Carnegie Mellon, a Master of Divinity degree from Chicago Theological Seminary and a doctorate in theater for youth from Arizona State. She has incorporated projects on race, class, gender, childhood and faith into a career of theater and performance studies and how the arts connect to citizenship, self and culture.

Her cast for “Anon(ymous),” several of whom are portraying two different characters, includes:

The remaining productions in MTSU Theatre’s 2021-22 schedule, which is part of the 10th season of the College of Liberal Arts’ “MTSU Arts” brand for the university’s fine arts programs, include: 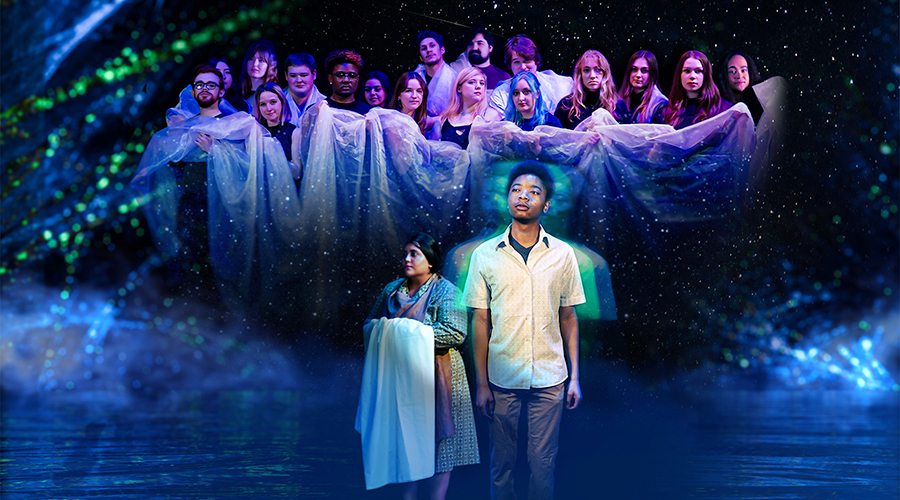 Senior theatre majors Lyndarious Arrington of Antioch, Tenn., right, and Paloma Diaz of Murfreesboro, left, pause during a scene in the MTSU Theatre production of “Anon(ymous),” a 21st-century reimagining of “The Odyssey” coming to Tucker Theatre Feb. 17-20. Arrington plays the title character, the young refugee Anon, and Diaz is his mother, Nemasani. This illustration, created by the Department of Theatre and Dance, also includes a photo of the play’s Ensemble, a group of Sewing Ladies, Chorus of Refugees, and Barflies who also populate the MTSU production. More information about the show, including tickets, is available at https://bit.ly/MTSUTheatreAnonymous. (photo illustration by MTSU Department of Theatre and Dance)