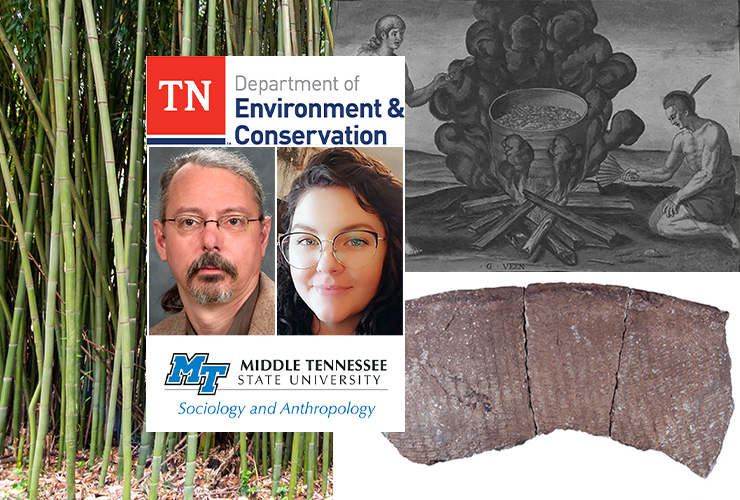 Two members of the MTSU community will be part of a state-sponsored effort to highlight archaeological research in Tennessee.

The Tennessee Department of Environment and Conservation will host a series of free virtual lectures on the third Thursday of each month from April to October. Kevin Smith, an MTSU professor of anthropology, will lead off the series at 6 p.m. Thursday, April 21, with “Exploring Native American Foodways in Ancient Tennessee: More Than Just Corn, Beans, Squash.”

Smith said explorers of the Cumberland River valley in the 1700s reported finding forests of American bamboo. Archaeologists have assumed that this now-endangered ecosystem developed in the 1600s after indigenous people left the area.

“For ancient Nashville between about 1,200 and 1,500 A.D., I will examine some exciting new research about the antiquity of these Cumberland Valley bamboo forests and how they intersect with the history, culture, traditions — and food — of indigenous people,” Smith wrote.

“Along the way, I will also explore the relationship of beaver ponds and maize fields, tame deer herds and a continentwide trade network of useful plants beyond maize, beans and squash.”

Millichamp’s research is based on MTSU students’ excavation of ceramic sherds at Bledsoe’s Lick in Castalian Springs from 2017 to 2019. While their characteristics indicated the shards would be used as saltpans, the site where they were found is not optimal for producing salt.

“(Assistant professor) Paul N. Eubanks, (assistant professor) Tiffany Saul and I developed a research project that seeks to understand the function these ceramic vessels served for the indigenous peoples living near the Castalian Springs Mound Site (circa AD 1200-1350),” Millichamp said.

“We hypothesize that the ceramic vessels could have been used to boil corn over long periods of time to enhance the corn’s digestibility and nutritional value. Another possibility is that the vessels were used to concentrate the mineral-rich brine to be used in purification ceremonies.”

Millichamp analyzed the ceramic sherds for trace elements and stable carbon isotopes at the Arizona State University Metals, Environmental and Terrestrial Analytical Laboratory with funding from the National Institute of Justice and the Tennessee Council for Professional Archaeology.

“Our project has provided information that we can use as a foundation to proceed with future studies that may elucidate the original use of these ‘saltpans,’” Millichamp said.

The virtual series resulted from efforts by TDEC’s Division of Archaeology to share archaeological research in Tennessee with professionals and the public following the cancellation of the division’s 2022 annual meeting. The meeting had taken place each year since 1989.

Program abstracts and links to virtual meetings will be made available as each presentation approaches at https://tinyurl.com/bds65hw9. For more information, contact State Archaeologist Phil Hodge at Phil.Hodge@tn.gov.