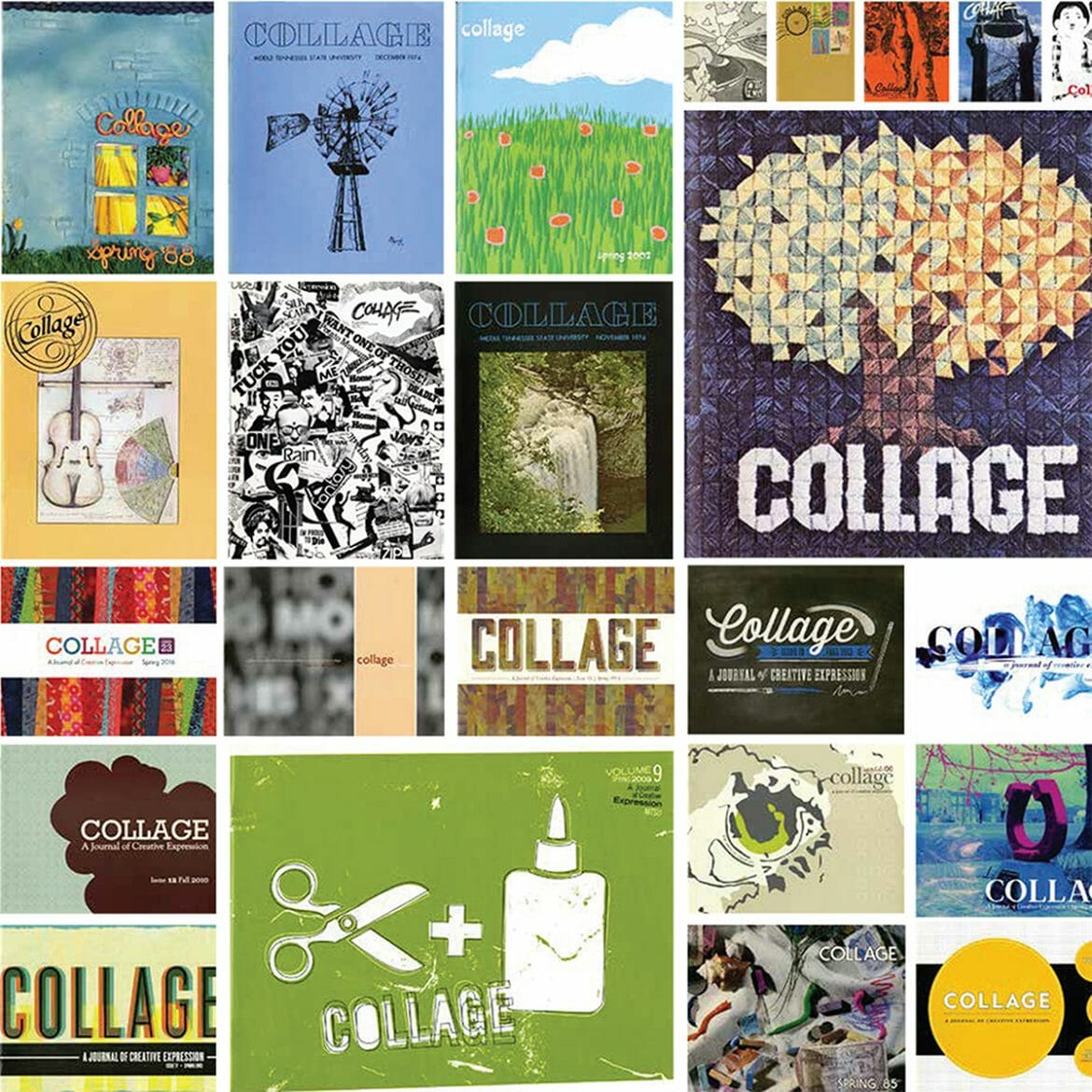 For 50 years, Collage magazine has published student poems, stories, and art that reflect issues of the day

Creativity might get love from mom, stuck with a magnet to the fridge. Sometimes friends, sometimes teachers compliment. But that moment when a jury of peers says it’s good, and good enough to be published, well, that can be a game-changing validation.

For 50 years, Collage: A Journal of Creative Expression has been that vehicle for MTSU students. Publishing artwork, photos, poetry, and short stories created by MTSU students, the magazine has not just validated student talent, but it also has helped launch careers.

Author Leah Bailey was published four times in Collage after returning to MTSU for her master’s in the College of Media and Entertainment in 2015. She also won the magazine’s Creative Expression Award twice. Bailey graduated MTSU with a bachelor’s degree in Horse Science in 2005. After several years working in the horse racing industry, and after experiencing a horse-riding accident, she started writing a novel while she recovered. Later she decided to return to MTSU to pursue her graduate degree.

“Coming from a non-English-major background affected my confidence level,” Bailey said. But once she was published in Collage, she was validated.

“Collage is so beneficial for new and emerging writers,” she said. That first publication of a short story opened the door.

“It made me feel like my dream is more likely to happen. It was a validation of that dream,” Bailey said. “I was walking on clouds for a little while and didn’t tell anyone about it until it was printed—and real.”

Bailey then had the confidence to submit short stories to other magazines such as Southern Writers, where she won its 2016 writing contest. She’s now an adjunct professor at MTSU and Motlow State Community College.

But Bailey is certainly not the only former student who credits experience with Collage  with launching a professional career.

“It’s a place for creative people to share their work, and it’s something they can always reference,” said Caitlin Noonan, former Collage  editor and recent graduate who now works at Penguin Random House in New York. “It’s proof of good work, and there’s not a lot of things like this.”

An English major, she joined the staff during her sophomore year as a fiction editor on the literary team. She then became editor-in-chief for two years.

“Collage was such a huge part of my college life and the first introduction into the world that I wanted to be a part of,” Noonan said.

The process of carefully going through hundreds of entries individually, then discussing the highest ranked entries during team meetings to come to consensus on Collage’s  content helped build her professional skills.

“And you don’t always get your way,” Noonan remembered. “You learn to take all opinions into consideration.” Someone might fight for a certain piece and help other team members see things from another perspective.

Those meetings could last hours and get pretty intense. Pizza required.

About 300 to 400 student submissions are considered for each Collage, which is published every fall and spring under the advisement of Marsha Powers, Honors College coordinator of special projects and publications.

“One of the prime aspects of Collage  is that the staff can produce whatever they want,” said Kimi Conro, the magazine’s current creative director.

“Marsha is an amazing advisor. She gives us the reins, and it’s our job to take care of it. It’s student-led and student-read.

”Students learn about the publication process, editing, and design, with the end product being a portfolio piece and résumé booster.

“We publish something to be proud of, and it really shows the talents of our students,” Powers said.

Each semester, one piece of work from each of the major categories—art, photography, poetry, and prose—receives Creative Expression Awards. Submissions are heavily from students within art and literature majors, but many also come from the general student population.

For years, Collage  was part of the student publications department, which operated student newspaper Sidelines and a yearbook. In 2004, the Honors College took on Collage.

“A benefit of housing Collage  in the Honors College is that we are accustomed to working with talented students from all colleges on campus,” Honors College Dean John R. Vile said. Compared with some other creative magazines that seem to focus on shock value, Vile loves the great work and nice balance of the MTSU student volume.

A few editions of each magazine from 1968 through the most recent issue reside in a neat file drawer in the Honors College building. The poems, stories, and art reflect issues of the day, and still do. Much of the material, though, is timeless—poems and stories about love and dreams, photo essays about topics that run the gamut from family to music to society, and art of every genre, printmaking, oil, watercolors, and mixed media.

While the core of Collage  will continue to be its print magazine, Collage staff and student web designers are working on a website that would allow music and more to be submitted. If all goes well, that new part of Collage  should be up and running in the Spring 2018 semester, just in time for the 50th anniversary.

“In society now, we’re all online and Instagrammed, so it’s still important to maintain a classic printed magazine, hold it in your hand, read it, and look at this art with the best quality printing,” Noonan said.

“But why it’s lasted so long is that Collage isn’t set on staying the same always. I’m so happy they found a way to stay relevant.”

Collage publications dating back to 2005 are available here.