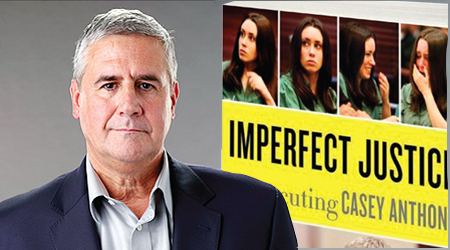 One of Florida’s newest State’s Attorneys — and the first U.S. prosecutor to present DNA evidence in court — will bring his expertise to MTSU on Thursday, Oct. 18.

Jeff Ashton, who prosecuted accused child-killer Casey Anthony in 2011, is the fall 2012 speaker for the William M. Bass Legends in Forensic Science Lectureship. He will speak at 7 p.m. on “A Philosophy Major’s Life in Forensic Science” in the ballroom of MTSU’s new Student Union Building.

Ashton, who also is the co-author of Imperfect Justice: Prosecuting Casey Anthony, began his career prosecuting traffic offenses for the State Attorney’s Office in Orlando, Fla.

His handling of hearings there on the legality of evidence from Breathalyzer machines led him to explore how new scientific techniques could be used to convict defendants.

Ashton’s groundbreaking use of DNA evidence in a 1987 serial rape conviction helped to open the door for international acceptance of the new science. In a 30-year career as a prosecutor, he took 300 cases to trial, including 84 murder cases, and won convictions in 12 capital murder trials before retiring in 2011.

This past August, he defeated his longtime boss for the post of Orange-Osceola State Attorney. In January, Ashton will begin the new task of overseeing all prosecutions for Florida’s Ninth Judicial Circuit, which is headquartered in Orlando.

Ashton will sign copies of his book after his Oct. 18 lecture. MTSU’s Phillips Bookstore, located in the Student Union Building, will sell the books before the lecture as well as outside the ballroom that evening.

Ashton’s lecture is co-sponsored by the MTSU Distinguished Lecture Fund, the Office of the University Provost, Phillips Bookstore, the College of Liberal Arts, the University College, the University Honors College and the MTSU sociology and anthropology, chemistry and criminal justice departments. The Middle Tennessee Forensic Science Society also is sponsoring Ashton’s visit.

Off-campus visitors planning to attend should be aware that nearby construction may limit parking opportunities. Organizers are encouraging visitors to park in the South Rutherford Boulevard lot and ride a Raider Xpress shuttle into campus and around the Roundabout to the Student Union Building. A printable campus map is available at http://tinyurl.com/MTParkingMap12-13.